Well timed diagnostics and correct evaluation of damaged tissues condition at athletic injury is a basis of adequate therapy.

During analysis of lower extremities athletic injuries frequency in hockey players it was found that most frequent of them are (in decreasing order): damages of a knee joint, damages of hip muscles and hip joint. Among the abovementioned pathologies, diagnostics of lower extremities muscles is the most topical one, because it is the least explored trend due to absence of authentic diagnostic criteria.

Nonlinear diagnostics (NLS) in revealing of athletic injuries is the new, still poorly spread method. Other methods of ray visualization in diagnostics of a sports trauma have their own disadvantages. So, roentgenography at muscles affection is less informative, availability of a computer tomography (x-ray and MRI) is limited due to high cost and duration of a research. Radiation exposure should also be taken into account when we speak about x-ray methods of research. Thus, NLS-diagnostics, thanks to its informativity, harmlessness, availability, possibility of repeated application for dynamic control, mobility (with portable NLS-scanners), is a promising technique of muscles traumas diagnostics. A possibility of minimum-invasive diagnostic and medical interventions under NLS-control should also be noted.

At the present day a common classification of muscles traumas is not available. But we believe, that among many existing, the most comprehensible is V. Krejci and P. Koch classification (1976), which precisely displays pathomorphological substratum of affection.

According to V. Krejci and P. Koch classification, muscles traumas are divided into three groups:

1. A stretching of muscles with anatomic damage of integrity of one or several muscles fibers and muscular stretching, when elasticity limit is reached;

Before introduction of NLS-research, diagnostics of complete ruptures of muscles was not difficult, but damages related to 1st and 2nd groups of the above classification, came to light, as a rule, during surgeries.

Diagnostics of microtraumas requires special attention, as these damages are often underestimated because of minor clinical manifestations, however, despite their “microsize” and “microclinic”, they can result in changes (sometimes irreversible), preventing perfection in sports. A microtrauma can lead to increase of damage rate and transition to severe trauma, when appropriate measures are not taken.

The objective of the present work is to study possibilities of NLS in diagnostics of athletic injury of lower extremities.

During 2004-2005 we studied 55 sportsmen-hockey players (men of 18-29 years old) with closed injuries of lower extremities. In 16 (29.1%) cases traumas happened during training, in 39 (70.9%) – during a game. Patients complained about pain in an extremity at movement, mobility restriction, swelling and bruises.

The study was performed with NLS-devices “Metatron”-4025 (Institute of Practical Psychophysics, Russia), with 4.9 GHz generator frequency. We used “Metapathia GR Clinical” professional computer software, allowing to apply three-dimensional visualization of extremities. In the course of study we applied NLS-ultramicroscanning mode, which made possible to study ultrathin structures of tissues.

Three types of lower extremities muscles injury can be singled out according to a mechanism of damage.

1. Damages related to overexertion. Intensive starting stress, especially at insufficient warm-up and at overcooling, may result in a rupture. Also at overexertion hyperextension of muscles may develop, which in its turn, may lead to pain or damage of fascial compartment, which is most typical for adductor muscles of a hip and posterior muscles of a hip.

2. Actual traumas due to the external damaging factor – a direct or indirect (falling) blow.

According to J. Comtet and W. Muller complete ruptures happen in the muscles having isolated function. In quadriceps muscle of thigh it is m. rectus femoris, not having any synergists. This trauma happens more often in hockey players after hockey-stick blow. Rectus muscle of thigh is damaged most frequently in a spot of muscle to tendon transition. Partial ruptures are more often located in biceps muscle of thigh and adductor muscles thigh of a thigh. Integrity of adductors is violated not only in a spot of muscle to tendon transition, but also in an attachment to pubic bone spot. In the medical literature such trauma is called «ARS-complex» (adductor rectus syndrome complex). As the term suggests, along with damage of adductor muscles, a abdominal rectus muscle is injured in a spot of its attachment to symphysis.

Conditionally traumas of muscles can be divided into microbursting (affection zone of 3-5 mm) and ruptures sized more than 5 mm. Traumas can be longitudinal – along muscular fibers, and transversal. Longitudinal traumas are more frequent, easily diagnosed and treated. NLS-graphically hematomas and synoviomas are visualized in a trauma spot. At transversal bruises and ruptures NLS-picture is polymorphic due to atypical traction and muscular ischemia, and that complicates diagnostics essentially. 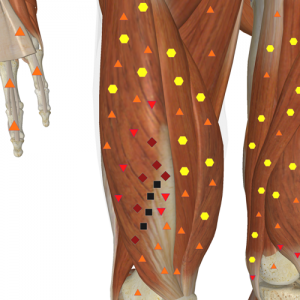 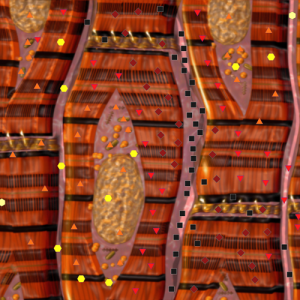 Application of NLS-scanners with 4.9 GHz sensor and NLS-ultramicroscanning mode allows to visualize damages of muscles at sports trauma with high accuracy. The following signs are typical.

2. Presence of hyperchromogenic and isochromogenic areas of the various sizes with indistinct contours – hematomas. NLS-angiography has an important role in their diagnostics. NLS-ultramicroangiography reveals affection of vascular walls in these structures. This sign allows to differentiate hematomas from tissular processes.

3. Pathological traction of injured areas is characterized by higher chromogeneity (5-6 points on Fleindler’s scale) in comparison with the intact muscular tissues.

It is necessary to examine both strained and relaxed condition of muscles during comprehensive diagnostics. It is recommended to measure the revealed pathological zones for the subsequent dynamic control.

According to NLS results the following groups of traumas are revealed:

Thus, the majority of traumas (94.5%) was represented by bruises of muscles sized less than 20 mm, diagnostics of which by other methods is difficult. At the same time wrong medical tactics and incorrect choice of a training mode at such traumas can lead to development of further damages of a muscle, resulting in restriction of sports activities. This fact specifies the importance of NLS-research in diagnostics of a muscular trauma in sportsmen. 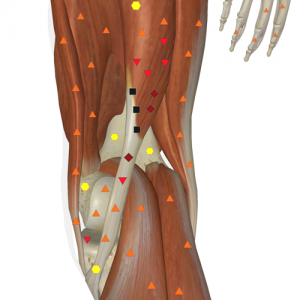 As our researches have shown, in most cases (94.5% of all studied group) bruises and ruptures of muscles are accompanied by hematomas of various forms and sizes. Only in 3 cases at microbruises of muscles sized 5-7 mm no hematomas were revealed. Intermuscular hematomas are located along muscular fibers, at NLS-ultramicroscanning they were visualized as hyperchromogenic formations of various forms depending on location in a muscle, changing the form during physical activity. Also, it is obligatory to evaluate the integrity of investigated muscle’s own fascia for diagnostics of possible prolapse of muscular fascicles into fascia prolapse with development of a muscular hernia.

Careful NLS-diagnostics of a muscular trauma allows to decide about possibility of its minimum invasive therapy. In sports medicine avoidance of additional operational injuries at trauma treatment is extremely important.

Interventional NLS allows to carry out:

2. Introduction of medicinal agents directly to a pathological nidus.

3. Coagulation of a bleeding vessel.

Minimum invasive interventions are performed in 17 (30.1%) patients. This group included patients with bruises and partial ruptures of muscles complicated by hematomas sized from 5 cm longitudinally. In all cases curative effect has been reached. No complications related to minimum invasive therapy of hematomas were observed.

Among 55 patients of the studied group in 2 (3.5%) cases surgical treatment of a trauma was carried out: 1 patient with a complete rupture of rectus muscle of thigh in a spot of muscle-tendon transition, and 1 – with partial rupture of rectus muscle of thigh with damage of more than half of muscular fibers, complicated by a hematoma.
In other cases (36 (65.4%) patients) we applied nonsurgical treatment with dynamic NLS-control. Dynamic NLS-control in the course of treatment and during the regenerative period allows, if necessary, to correct treatment in order to achieve the required result, to reveal and stop possible complications.

As our experiment shows, for NLS-diagnostics of a sports trauma almost any devices can be used. With increase of a device class and increase of generator frequency, the accuracy and reliability of diagnostics increases as well, owing to increase in its resolution. With modern devices “Metatron” (4 generation) injuries of muscles sized from 2 mm are accurately diagnosed. Application of NLS-ultramicroangiographic modes expands possibilities of muscular trauma diagnostics thanks to blood circulation estimation, revealing of hematomas, identification of haemorrhage in a pathological area, and also allows to optimize minimum invasive medical interventions by increase of their safety and pointing accuracy.

Thus, NLS-research with NLS-ultramicroscanning is a promising method of sports trauma diagnostics, allowing to reveal the damages of muscles which are not diagnosed by other methods; and also it can be used as a way of navigation for minimum invasive medical interventions.