Difficulties of modern diagnosing and adequate surgical treatment of renal cancer (RC) are conditioned mainly by absence of certain specific clinical manifestations of RC, continuous asymptomatic course and late applying of patients to a clinic for specialized help. At the same time about 50% of renal tumors are diagnosed at asymptomatic stage during clinical studies not related to RC, these cases are called “radiologist tumor”. Among “accidentally” revealed tumors 85% are localized forms, when at the presence of clinical symptoms only 40-45% of tumors develop in a kidney.

Development of renal cancer surgical treatment technologies with a tendency to almost global introduction of laparoscopic and organ-preserving methods of surgery considerably increases requirements not to only well-timed diagnostics of RC, but to evaluation of its regional prevalence ratio mainly. The main objective of three-dimensional NLS-graphy of patients with renal cancer was in defining or specifying of the main process stage and in some cases in differential diagnostics of revealed neoplasm.

We studied 335 patients suffering from renal cancer. In the structure of researched patients men prevailed men (57.6%) aged 61 – 70 (33%) and 71 – 80 (27.7%) NLS-research was fulfilled with diagnostic system “Metatron”-4025 (ClinicTech Inc., USA; the IPP, Omsk). In 213 patients at pre-surgical period NLS was applied in standard mode consisting of two consecutive stages: two-dimensional and three-dimensional scanning of kidneys and retroperitoneal space. A part of patients was subjected to 3D-ultramicroscanning with spectral-entropic analysis (SEA) (77.3%).

Criteria of NLS-evaluation of RC regional prevalence taking into account size of a tumor are systematized depending on a direction of primary tumor invasion, presence of vascular affection symptoms and regional metastasis.

Results of NLS-study have proven that among symptoms of local distribution of RC the most frequent symptoms belonged to a section containing invasion of primary tumor to structural elements of kidney’s cavitary system. The most frequent were symptoms of kidney’s cavitary system manifested by presence of hyperchromogenic nidus (in 46.2% of cases) and indistinct contours of cavitary system elements. Then, in accordance with frequency of appearance, were symptoms of invasion confirming extrarenal spreading of primary tumor. In this category with almost the same frequency we registered symptoms related to affection of surrounding tissues (30.8%), in majority of cases combined with hyperchromogeneity of the external contour (capsule) of the tumor itself (26.7% of cases). SEA-symptoms of regional metastasis were detected in 57.4% of studied patients.

At the same time we should emphasize the following factor. The first two categories of RC regional invasion criteria and symptoms of tumor invasion into neighboring organs are characterized by the clear dependence of symptoms revealing frequency from size of the primary tumor with maximum values at tumors above 70 mm size. Symptoms of regional metastasis and symptoms of thrombogenesis or invasion into renal vein or inferior vena cava were registered more frequently at size of primary tumor from 41 to 70 mm (24.8%) and from 20 to 40 mm (14%) correspondingly.

Besides we should note a possibility to reveal signs of regional spreading of a primary tumor of less than 10 mm size by NLS-ultramicroscanning with SEA. In single cases of such tumors we registered an invasion into kidney’s cavitary system (0.8%), extrarenal spreading (1.2%) and symptoms of regional metastasis (2.8% of cases).

The following clinical observation is an example.

Clinical observation No.1. Patient M., 53 years old, administered to urology department for check-up and treatment. The patient had no specific complaints. Prophylactic ultrasound research revealed right kidney tumor. To identify stage of the neoplasm and decide about surgical intervention we carried out NLS-examination. Two-dimensional NLS-study of kidneys and retroperitoneal space and frontal reconstruction in superior pole of the right kidney detected heterogeneous in structure hyperchromogeneus tumor of parenchyma sized 34x29x40 mm. To define regional spreading of the primary tumor in the patient we carried out NLS-ultramicroscanning with SEA of kidneys and retroperitoneal space and 3D reconstruction of acquired image.

According to results of two-dimensional research we diagnosed T1а stage of the tumor (40mm in the longest dimension). Following 3D reconstruction of acquired image and NLS-ultramicroscanning with SEA diagnosed invasion of the primary tumor into structural elements of kidney’s cavitary system. On the basis of gathered data we decided about surgical intervention in the form of radical nephrectomy by laparoscopy.

Typical NLS-signs of tumor invasion into kidney’s capsule and paranephric fat are illustrated by the following clinical observation.

Clinical observation No.2. Patient L., aged 57, administered to urology department for examination and treatment of space-occupying mass in a left kidney diagnosed by ultrasound study. Repeated ultrasound study diagnosed left kidney’s parenchyma tumor of 38 mm size. On the basis of acquired data primary tumor was considered as T1a (1st stage) and at the preliminary stage of the pre-surgery examination organ-preserving surgical intervention in the form of partial nephrectomy by laparoscopy was offered.

To specify a stage of the tumor and make final decision about type of surgical intervention we have carried out NLS-research. A series of NLS-grams in two-dimensional NLS-research mode in axial and frontal projection and saggital reconstruction have revealed signs of extraorgan spreading of renal tumor: structural damage of paranephric fat and presence of extrarenal tumorous component.

According to results of NLS-ultramicroscanning with SEA the primary tumor was classed as T3a (3rd stage), surgical intervention applied in a form of radical nephrectomy.

Pic.1. NLS-graphy. A part of damaged structure of paranephric fat and extrarenal tumorous component: A – axial projection; B – frontal projection.

NLS-symptoms of thrombogenesis in renal vein and/or inferior vena cava in a form of intraluminal thrombotic masses and mural defects of endothelial layer are diagnosed at various sizes of the primary tumor by NLS-ultramicroangiography and 3D reconstruction of acquired image. The following clinical observation illustrates this example.

Clinical observation No.3. Patient F., aged 79, administered to urology department for examination and treatment because of complaints about drawing pain in lumbar region and hematuria accidents. Ultrasound examination revealed a tumor of upper pole of a left kidney.

We fulfilled NLS-research to specify a stage of the main disease and in the upper pole of the left kidney detected additional neoplasm of roundish shape which deformed the kidney, size of the neoplasm was 73 mm max. A series of NLS-grams of frontal projection at NLS-ultramicroscanning detected signs of thrombogenesis in a renal vein in the form of endothelial layer defect (intravascular component), 15 mm long, clearly visualized at 3D reconstruction of an image.

On the basis of SEA results we carried out differential diagnostics of detected space-occupying masses of renal parenchyma, confirmed by following biopsy in 98.2% of cases. 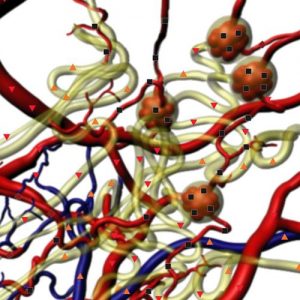 On the basis of acquired results ultrasound picture required differential diagnostics of revealed neoplasm of a right kidney. On the basis of SEA results, in spite of presence of extraorgan component, we supposed a presence of benign neoplasm (high spectral similarity with “angiomyolipoma” etalon (D=0.83). Results of biopsy confirmed benign neoplasm of a right kidney, requiring dynamic monitoring only.

1. The main advantage of NLS-research at pre-surgery examination of patients with RC was reliable diagnostics of a primary tumor spreading into structural elements of cavitary system, paranephric fat and kidney’s capsule, especially in diagnostics of thrombogenesis (invasion) in renal vein or inferior vena cava.

2. On the basis of NLS-study we noted a tendency to increasing of stages of a main disease and therefore increasing of number of radical surgical interventions. At the same time differentiation of a 1st and a 3rd stages of RC is possible, when it is difficult and sometimes impossible on the basis of ultrasound study results.

3. In some cases we carried out differential diagnostics of malignant or benign character of revealed neoplasm growth using SEA, which was confirmed by biopsy in 98.2% of cases.