There are presented results of the complex NLS-research of patients with space-occupying lesions of orbital and extra-orbital genesis which were confirmed by the results of the clinical research, MRT and CT scanning and also morphologically verified in patients who had underwent surgery. It is determined that spectral-entropic analysis of tissues structure of spectral parameters of blood circulation in feeding vessels substantially helps during corrective diagnostics of the eye tumors. 3D NLS-reconstruction allows accurate stating the syntopy of a neoplasm and its relation with the surrounding tissues on a real time basis. NLS-ultramicroscanning is one of the effective methods in determination of neoplasm types. As a result of performed work the advantage of full-scale 3D study is demonstrated in comparison with traditional 2D NLS-graphy.

Over the last years there is a steady increase tendency of malignant neoplasms formation in eye tumors despite its insignificance in the structure of oncological pathology. It should be noted that the problem of an early diagnostics of oncoophthalmological pathology has its own peculiarities in the different countries. Retinoblastoma in particular is the most spread congenital and acquired oncological disease. Among 450-500 thousands of examined patients there are 20-30 firstly diagnosticated cases of retinoblastoma registered every year in USA. These retinoblastoma cases differ by their aggressive growth rate and they cause metastasis, invalidity and lethality if untimely diagnosed.

There are certain difficulties in the diagnostics of malignant orbital and extra-orbital neoplasms related to the complexity of topographic-anatomic features of the head, type and growth rate of the tumor. In ophthalmological practice it is both necessary to detect neoplasm and also to evaluate the rate of process prevalence in surrounding tissues, change of the vessels that feed the tumor. It is known that many brain diseases, supramaxillary and ethmoidal cells and also endocrine diseases are accompanied by the syndrome of unilateral or bilateral exophthalmos. In many cases such syndrome rouses an assumption for oncological pathology of eyes.

Modern ophthalmoscopic and roentgenologic methods not always allow dealing with the problems of topographical diagnostics of tumors. Over the last years there were some reports concerning diagnostic capabilities of CT, MRT in case of eye and orbital cavity neoplasms. But the large-scale implementation of abovementioned research methods of eyes and orbital cavity depends largely on their availability.

In this regard the use of modern techniques of non-linear diagnostics (NLS) for detection, differential and corrective diagnostics of eyes and extraorbital neoplasms is closely followed by the researches. Implementation of non-linear ophthalmography into clinical practice actually reflects all the periods of tool engineering development and improvement of the technologies in this regard. There were no detailed studies of diagnostic capabilities of NLS-graphy in case of neoplasms in ocular organs.

In case of assumption of eyes neoplasms ophthalmologists deal not only with the detection of their organ affiliation but also with rational evaluation of blood circulation. In this regard 3D NLS- angiography offers great opportunities in oncological ophthalmology.

The goal of given report is experience interchange of clinical application of 3D NLS-graphy in full assessment of eyes and orbital cavities neoplasms.

MATERIAL AND METHODS OF RESEARCH

Full-scale clinical NLS-graphic studies of the eyes and orbital cavities were carried out in 90 patients. Among them there were 30 patients – 18-65 years old volunteers (control group of patients) with no detected pathological changes of the eyes and orbital cavities. In 2009-2010 at Oncoophthalmology Department of Texas M. D. Anderson Cancer Center there were 60 patients with an assumption of eyes tumor. The age of patients varied from 7 to 76 years (24 men, 36 women). Retinoblastoma was diagnosed in 40 patients, uveal melanoma was diagnosed in 14 patients and orbital cavity neoplasms were diagnosed in 6 patients after full-scale clinico-ophthalmological examination. 54 of patients were operated on in the clinic which allowed comparing the results of NLS-graphy with gross appearance of the removed neoplasm.

NLS-research of the eyebulb and orbital cavity was performed in M. D. Anderson Cancer Center using «METATRON»-4027 system with «Metapathia GR Scientific» professional software (Clinic Tech Inc, Texas; IPP, Russia) with the use of non-linear trigger multi-frequency sensors with 9.6 GHz generator. The system is designed for 2D and 3D researches. Volumetric ultramicroscanning mode, multiplan analysis of the image, interactive 3D-rendering and spectral-entropic analysis of the tissues structure were used during the research. Overlapping mode of volumetric data received in the modes of NLS-image and MRT was used for 3D organ reconstruction procedure. Dynamic multifrequent focusing, panning and scaling (high-resolution) are the parts of the research technology.

The examination of both eyebulbs of the patient and comparison of their NLS-graphic image were the obligatory conditions.

Virtual 3D NLS-reconstruction along with relief and form determination of the neoplasm is used for correction of its ratio to the eye and orbital cavity structures. The use of 3D color reconstruction of the vessels helped studying of angioarchitecture of the eye vessels and neoplasm presenting the information concerning the peculiarities of the feeding artery.

414 patients were sent to the ophthalmology department of M. D. Anderson Cancer Center during 2011-2012 from various state medical institutions to exclude ophthalmological pathology cases. Tumoral diseases were found in 126 patients (30.4%), intraocular tumors and orbital cavity neoplasms were found in 60 patients, blepharoncuses were found in 40 patients, conjunctivoma and lacrimal passages tumors were found in 26 patients. All patients were fully examined using routine clinical methods and advanced non-linear ophthalmography technologies. Given report does not include the results of non-linear diagnostics of blepharoncuses, conjunctivoma and lacrimal passages tumors which must be considered and summarized individually.

At cancer care facility the complex of methods and techniques of NLS-diagnostics must have a significant importance in the examination system of the patients. We have developed a system conception to non-linear diagnostics of malignant neoplasms including eye and orbital cavity tumors which provides revealing of pathological process for the detection of spectral similarity with etalon process (spectral-entropic analysis) correction diagnostics of the local, regional and remote spread of the neoplasm, estimation of the blood circulation condition in feeding vessels, study of angiogenesis state in the tumor, diagnostics of the accompanying diseases, complications and consequences of oncologic patients treatment. In this regard the use of 2D and 3D NLS-graphy and the methods of ultramicroscopic NLS-angiography substantially expands the opportunities of the corrective diagnostics of oncological eyes pathology.

The research began with a common 2D NLS-ophthalmography. The structure and condition of lens capsule, structure of vitreous body and condition of optic nerve disk were subjected for the assessment. In case of detection of changes of the orbital or extraorbital localization their following aspects were closely studied: type, location, sizes and dimensional orientation of these changes. In the mode of 3D NLS-graphy the localization of the neoplasm was confirmed, the structure of the tumor with the use of spectral-entropic analysis was studied.

It should be noted that 2D NLS-graphy (when diagnosing volumetric intraocular formation according to the signatures of «plus-tissue» presence in either part of the eye-bulb) does not always allow performing the corrective diagnostics of the pathological formation spread and studying the type of tumor and vascularization of the formation which have primary importance when choosing the remedial measures.

Retinoblastoma is the most wide spread oncological eyes pathology. This disease was found in 34 of 40 patients (age of the disease up to 1 year) who have been observed by us. The tumoral affection of the both eyes was registered in 11 cases. 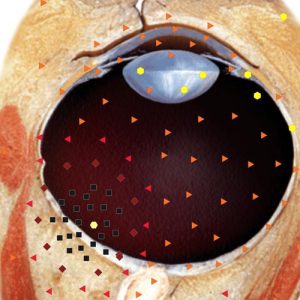 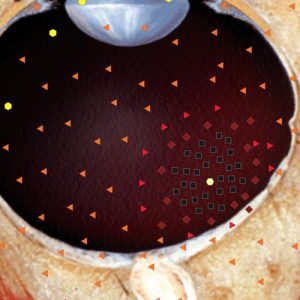 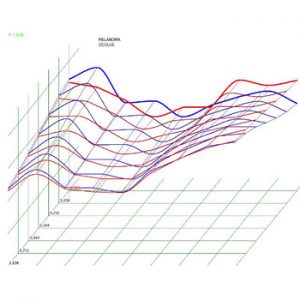 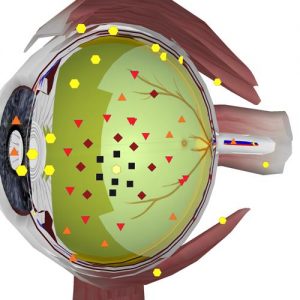 Retinoblastoma has some characteristic features when performing 2D NLS-graphy: detachment of retina in neoplasm area (36 cases), growing multinodular tumor with heterogeneous structure (17 cases of exophytic growth and 23 cases of endophytic tumor growth), increased chromogenecy (5-6 degree according to Fleyndler’s scale) with torose and bizarre contours, frequently with small or grouped petrificates (21 cases) with «comet tail» effect. At the same time a common 2D NLS-research does not always allow differentiating retinoblastoma from fibrosis of vitreous body, angiomatosis and Coats disease. 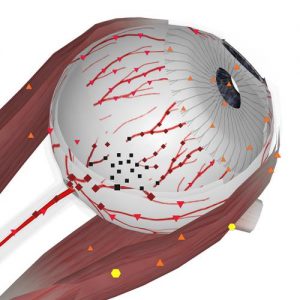 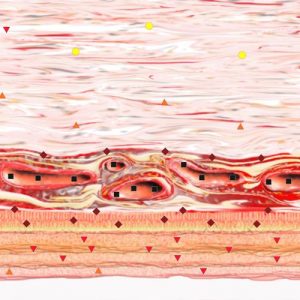 In  the mode of full scale 3D reconstruction with the use of spectral-entropic analysis the accuracy of the diagnostics in case of such pathology was 2-3 times higher than when using common 2D NLS.

Hemangioma of retrobulbar cavity which constricted ophthalmic artery and optic nerve was detected in 1 out of 6 patients who suffer from orbital formations. In the mode of a common 2D NLS-graphy it was not possible to differentiate the pathology of an artery and vessels in the central parts of hemangioma. Hypochromogenic glioma of retrobulbar part of the visual nerve was found in 2 cases. Orbital lymphosarcoma was confirmed when 3D NLS-graphy with spectral-entropic analysis was used: along with studying of the type and the structure of the formation a possibility for careful study of affected feeding artery was provided. It was possible to assess the type of vessels affection inside of the tumor using ultramicroscanning mode with spectral-entropic analysis. Formation of lacrimal glands was detected in 2 cases. In the mode of 3D reconstruction the pathology of the feeding vessels of suprapubic arterial system and ophthalmic artery was detected.

Performed researches indicate that the complex approach with the use of modern technologies of 3D NLS-diagnostics with spectral-entropic analysis helps improving the quality of the differential and corrective diagnostics of eyes and orbital cavity neoplasms.

Researches also showed that 3D virtual NLS-reconstruction with spectral-entropic analysis allows the best accurate characterization of the structure, contours and the degree of involvement of surrounding anatomical eye and orbital cavity structures into pathological process.