In our country, continued development of a physical culture and sport was brought to a level of a prioritized federal issue, which includes 70% population involvement in sports activities, and in high performance sport – return to top three sport nations of the world.

Deviations in health conditions and illnesses, especially of a cardiovascular system, are the main reasons of temporary or permanent denial of sports activities. After several cases of sportsmen sudden death during contests, government of the country enacted new laws that extender and hardened medical monitoring of people involved in sports. Medical and sanitary, as well as medicobiologic supporting of sportsmen included into national teams of the Russian Federation has been assigned to the Federal Medico-Biological Agency (FMBA) of Russia since 2009. All sportsmen of national teams of Russia have to undergo a comprehensive medical examination (CME) in the FMBA’s medical institutions twice a year to get an access to contests. When significant deviations are found, additional examination or treatment, followed by access approval, are performed. In cases when unpronounced health deviations are present, specialists make access decisions on an individual basis. The most frequent of such cases are idiopathic scoliosis and vegetative dysfunction syndrome. As a rule, medical recommendations for treatment of these conditions have general preventive character with symptomatic treatment, if necessary.

Nowadays level of sports records has exceeded human organism performance. Increasing of a practice load and underestimation of restoration processes importance lead to overfatigue, overtraining and stress conditions, especially in high performance sport. Sportsman’s reserves directly depend on efficiency of limiting factors correction. Even slightest deviations from an adequate reaction of a cardiovascular system to maximum physical stress may limit oxygen supply to a brain cortex, heart and muscles of a sportsman, delay sports mastery improvement, and in the longer term, it can be a risk factor for cardiovascular illnesses development. Sequence of pathobiomechanic disorders, which leads to changing of a posture and various vegetative dysfunctions, is not always obvious for a team therapist, especially in symmetrical sports. Accuracy of such disorders diagnostics defines choosing of the most efficient correction methods.

The objectives of this study are:

– Evaluation of NLS-diagnostics possibilities in visualization of pathobiomechanic disorders sequence, which leads to dysfunctions of nerve, cardiovascular and skeletomuscular systems in highly qualified sportsmen;

– Evaluation of NLS-diagnostics possibilities in monitoring of efficiency of revealed deviations correction methods.

The study has been conducted for two years, since February 2019. It included 12 sportsmen of the national cycling team of Russia. All of them are cyclists of the same sports club, managed by A.A. Kuznetsov, Honored Coach of the USSR, and all of them competed in one of three age categories: 1 – juniors (17-18 years old); 2 – juniors-“unders” (19-22 years old); 3 – male-elite (23 years old and older). Juniors have Master of Sports ranks, “unders” and males – Master of Sport of International Class. All cyclists were Russia’s best in team pursuit, had won in Europe and World Junior Championships. Training methods, sports equipment, giftedness, accommodation and nutrition conditions were the same.

NLS-studies were performed by means of a device “Metatron”-4025, manufactured by Institute of Practical Psychophysics, with “Metapathia Clinical” computer software, fitted with a non-linear sensor of 4.9 GHz frequency. During the study, we evaluated functional state of tissues through their chromogenic character on Fleindler’s six-point colored scale.

In accordance with CME reports, the most frequent diagnoses in these sportsmen were the following: flatfoot in 100% of them; idiopathic scoliosis in 83.3%; vegetative dysfunction syndrome or hypertensive response to physical stress in 83.3%; biliary dyskinesia, Gilbert’s syndrome in 41.6%; allergic manifestations (allergic asthma, dermatitis, rhinitis) in 41.6%; chronic tonsillitis in 25%.

NLS-studies have proven presence of functional deviations in these organs. Besides, in 50% of sportsmen tests detected presence of a protozoal infection (lamblia, ameba) or ascaride. Unfortunately, CME standards do not include tests for protozoal infection or helminthes presence, which require additional equipment. Such high occurrence of parasitic invasion in cyclists related to road dirt getting into cyclists’ faces during training and in the rain.

Idiopathic scoliosis and vegetative dysfunction syndrome may have the same mechanisms in their pathogenesis. According to modern concepts, asymmetry of postural muscle tonus due to dysfunction of some sensory inputs of a postural system is the reason of non-optimal statics and dynamics. Role of visceral dysfunctions was proven by experiments held by I.P. Pavlov (1898). Disorders of locomotor activity if form of functional weakness of muscles, as well as paralysis and paresis of extremities, were registered in dogs at chronic irritation of cavernous organs. Visceral-motility reflexes provoke decreasing of all muscles tonus at high body temperature and infectious intoxication of all organs. In a person who recovered, but still have functional deviations in some organ, reflectory weakness remains only in the muscle that is associated with this organ. And since skeletomuscular system is a structure of balanced compression-tension, then weakness of some muscular link results in posture disorders.

Analysis has shown that in 83.3% of cyclists visceral-motility reflexes, coming from irritated organs, were the priority disorder in a sequence of skeletomuscular system’s dysfunctions and forming of idiopathic scoliosis. The most frequently diagnosed sequence of pathobiomechanical disorders is shown in the example of NLS-studies of sportsman “S”: 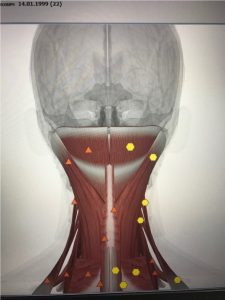 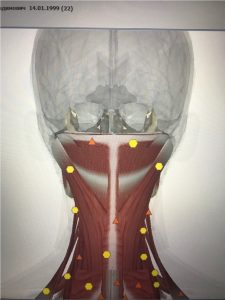 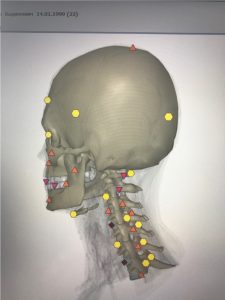 Pic.3  Instability of disks and vertebras 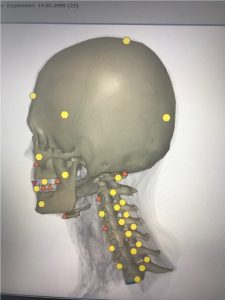 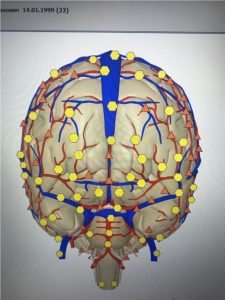 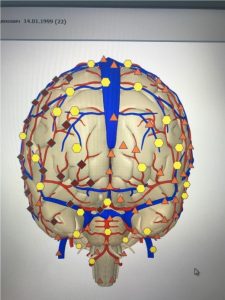 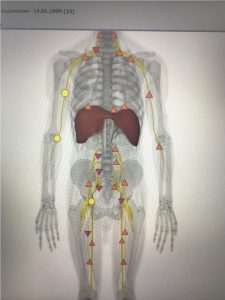 Pic.7 Weakness of a diaphragm cupula 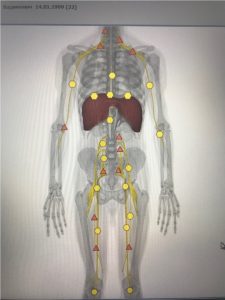 Pic. 8 After correction and compression of nerves 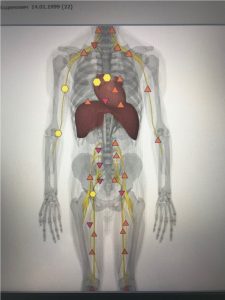 Pic.9 Compression of a pericardial sac 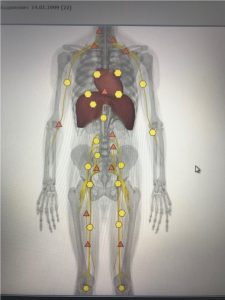 Pic.10 After correction by diaphragm cupulae 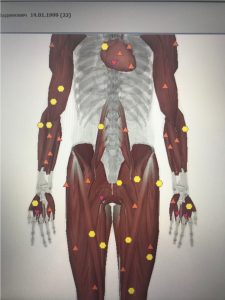 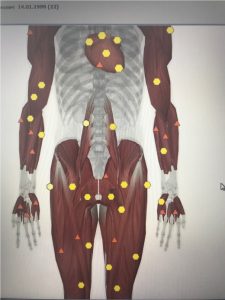 Program of treatment-and-rehabilitation measures was applied periodically and it involved influence to еру most important pathogenetic mechanisms of revealed dysfunctions:

Based on the result of consequent CMEs, we detected decreasing of functional disorders number, owing to of treatment-and-rehabilitation measures applied. Dynamics of cyclists’ sports mastery increasing was the main qualitative criterion of NLS-diagnostics efficiency and chosen treatment. 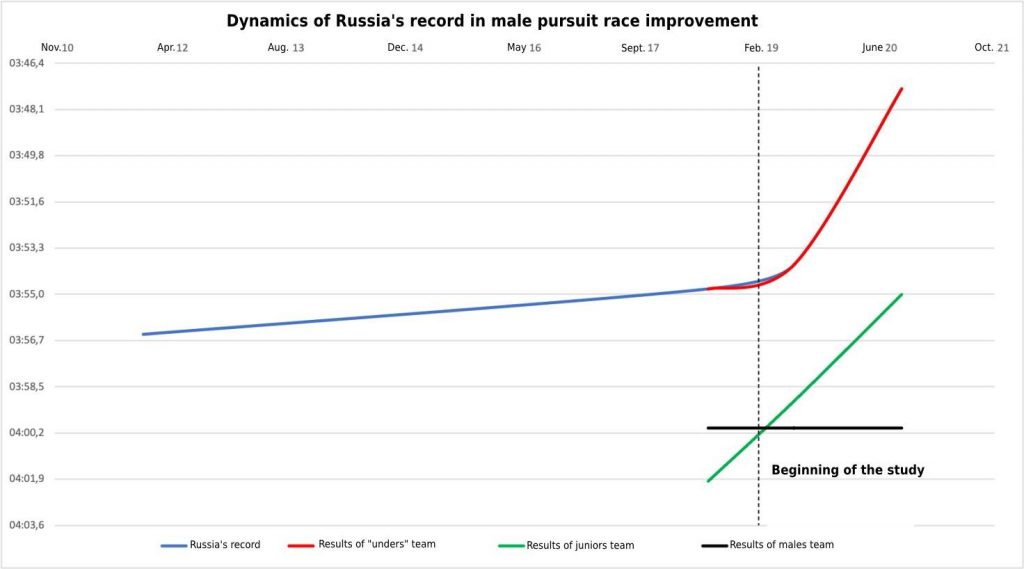 In previous years, relative speed of Russia’s record improvement, renewed by A.A. Kuznetsov’s team trainees occasionally, was 00.00,15 min. per year on average. For the period of the study, this team of “unders” improved it 15 times. This allowed not only to confirm team’s leadership in Europe and World championships in this age category, but also to win European games 2019 and Europe Championship 2020 in adult category. The same speed of sports mastery improvement was shown by junior team, which caught up and surpassed male team in mastery level. Male team showed absence of sports results improvement due to greater number of diagnoses set by specialists during CME in comparison with juniors; low orderliness in performing of self-treatment of muscles’ trigger spots and following of healthy eating recommendations.