The problem of pathology in the hepatopancreatoduodenal area still remains urgent and explains why researches are keen on the search for improved diagnosis methods, since the diagnostics proper is the starting point for determining an approach to treatment. Today the basic methods for diagnosing a pathology in this region are traditionally methods of direct artificial contrasting of the pancreatobiliary system, such as endoscopic retrograde cholangiopancreatography (ERCPG) and percutaneous transhepatic cholangiography (PTCG), well established in both diagnostics and treatment of a number of diseases such as cholelithiasis, cysts and tumors in the head of pancreas, tumorous and corrosive strictures of the biliary ducts, tumors of Vater’s papilla, etc.

At the same time, the radioendoscopic methods of investigation of the biliary ducts, though characterized by a rich diagnostic informational content owing to their invasiveness, still do not eliminate the danger of serious complications, such as acute pancreatitis, hyperamylasemia, cholangitis, sepsis, and allergic reactions, biliary flux into the abdominal cavity with developing biliary peritonitis and hemorrhages.

Their incidence rate varies from 2 to 36%. Besides, in the course of ERCPG different technical problems may arise (failure in the cannulation of Vater’s papilla, the impossibility to enter the duodenoscope at esophagus diseases, such as strictures, achalasia). In addition, ERCPG requires involvement of certain specialists like radiologic diagnosticians, surgical endoscopists and anesthetists.

The development of nonlinear computer diagnostics (NLS) as s method for diagnosing abdominal pathology, opened up new opportunities for detecting diseases in the hepatopancreatoduodenal region, with obstructive jaundice being one of their main clinical implications. With the development and adoption of a number of speedy programs for obtaining NLS images, specifically NLS-cholangiopancreatography, which allows to obtain an integrated virtual picture of the biliary system and pancreatic ducts without administration of contrasting agents and intervention into the biliary system, the method was attempted to put into active use as an alternative to ERCPG.

Some published works about NLS, have some distinct trends to pay more attention to this issue with a view of obtaining sufficiently convincing informaion, that would allow to draw a final conclusion about a new relationship between integrated X-rayendoscopic examinations, and in the first place between ERCPG and NLS, when detecting a pathology in the hepatopancreatoduodenal region. Some of the works suggested that NLS be used as a method preceding endoscopic cholecystoectomy.

With all the above in view, this paper aims to present our data on the role and significance of NLS at certain diseases in the hepatopancreatoduodenal region.

To achieve this aim the following tasks were performed:

– examination of the test group to study different versions of a standard NLS-picture of the biliary tract;

– description of the principal NLS semiotics in the patients with a pathology in the hepatopancreatoduodenal region;

– cross-comparison of MRT, ERCPG and NLS for a more objective assessment of the collected data;

– definition of clinical indications and diagnostic potentials of the NLS method for the patients with obstructed biliary ducts.

The NLS investigation was performed on 54 patients, of them 19 made a test group and 35 had different pathologies in the hepatopancreatoduodenal region, with 89% of these patients showing signs of obstructive jaundice. The patients were from 36 to 77 years old. There were 20 women and 15 men in the group of 35. As a primary method of investigation, all patients had a sonography, which acted as a screening tool for performing NLS. A relative comparison of the results of MRT, ERCPG and NLS was made for 18 patients.

The NLS investigation was carried out using the “Metatron”-4025M device, manufactured by the Institute of Practical Psychophysics and equipped with a 4.9 GHz digital trigger sensor.

We assessed the condition of the lymph nodes, especially in the portal fissure projection, and the hepaticoduodenal ligament on the virtual images. We used a special computer program for acquisition of a virtual image of the biliary system and Wirsung’s duct. 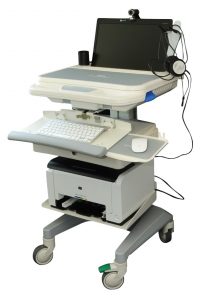 The virtual model distinctly visualized the common bile duct, common hepatic duct, right and left lobar ducts and gall bladder (GB). The segmentary and subsegmentary intrahepatic ducts are not actually visualized even in a polyprojection examination. The normal lumen of the common bile duct is 0.6 cm; the NLS-signal coming from it, is homogeneously normochromatic (1-2 points according to Fandler’s chromatic scale). 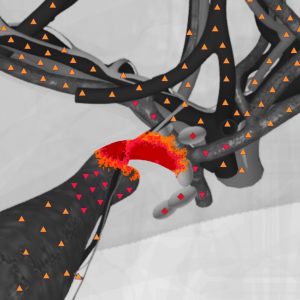 An insufficient detailing of the papillosphincter region was the basic limitation of NLS in our investigation.

Calculi are known to be the most frequent cause of the bile duct obstruction. According to our investigations, cholecysto-choledocholithiasis made 34% of all diagnosed pathologies in the hepatopancreatoduodenal region. Regardless of their location, the concrements in the biliary ducts were visualized on the NLS images as individual or multiple achromogenic zones (0 points), rounded or oval-shaped. The sizes of the concrements detected in the hepaticocholledochus and lobar hepatic ducts varied from 5 to 20 mm. 6 patients had single concrements, and 4 had multiple concrements, and the entire lumen of the hepaticocholledochus “stuffed” with concrements was found in 1 patient. 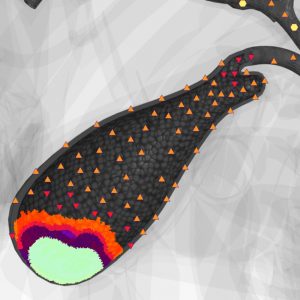 In the course of our observations we arrived at a conclusion that the NLS-diagnostics of concrements in the gall bladder depended on their size. So, as compared to the US data, the concrements under 5 mm in diameter were visualized on NLS shots.

In one observation, the concrement localized in some distal areas of the hepaticocholledochus, and on NLS shots, it looked like a hyperchromogenic oval-shaped defect with the upper outline looking like a concave lens. The combination of NLS-shots with conventional MR-tomograms in axial plane allowed us to specify the spatial relationship between the choledochus and head of pancreas and the duodenum, in other words, it allows to detail the localization of the concrement in the ampullar region of the common biliary duct.

The genesis of benign strictures of biliary ducts was related to their surgicial lesion or inflammation caused by lithiasis, chronic pancreatitis or papillostenosis in 90-95% of cases. The number of iatrogenic lesions of the biliary system ducts grew up with the extensive application of the laparoscopic cholecystectomy, because the intraoperative investigation of the common bile duct is more complicated during laparoscopy than during open surgery. In this connection, in terms of preoperative preparation for endoscopic cholecystectomy it is necessary to specify the anatomy of the pancreatobiliary system and assess its condition in order to prevent potential iatrogenic lesions of the biliary ducts.

So, owing to its noninvasiveness and high resolution, NLS can be a diagnosis-determining method for this kind of patients. Unlike ERCPG, NLS allows to visualize the bile ducts above and below the obstruction level, which is displayed on both MRT and NLS shots. The latter method gives a virtual physiological picture of the condition of hepatic and pancreatic ducts as compared to ERCPG, in which the administration of a contrasting agent overstates the extent of duct dilatation.

In all of our observation, NLS allowed to define the accurate extent of the stricture, its length and cause. In two cases, the stricture localized at the cystic duct level, which was indicative of their iatrogenic genesis. In one case it was an stricture hepaticocunoanastomosis. In 5 observations the strictures from 1.5 to 2.0 cm long were located at the confluence and in the proximal region of the hepaticocholledochus. 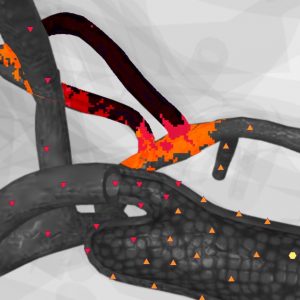 In assessing the stricture extent in the case where the lumen was not visualized on NLS-shots, we always analyzed the native MRT scans and supplemented the investigation with thin sections, which allowed forming a more exact opinion about the stricture extent. At the same time, comparing the results of nonlinear diagnosis to ERCPG one must admit that the latter method is more exact in determining the extent of duct affection. However, the essential criterion in deciding on the surgical correction method allows not only to detect the level and length of a structure, but also clearly specify on ultramicroscans the pattern of cholledochus deformation in presence of an stricture, which also determines the surgical approach to the reconstructive operations. 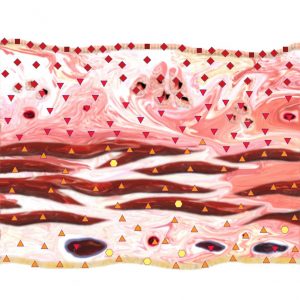 The combination of conventional MRT and NLS considerably enhances the diagnostic potential of this method as oppposed to ERCPG in diagnosing chronic or acute pancreatitis, because it allows not only to investigate the condition of the ducts of the pancreatobiliary system, but also to assess both the pancreas proper and the adjacent organs and structures. Of 4 our observations of chronic pancreatitis, in 1 case we had a frank lesion of the intrapancreatic part of the cholledochus caused by a chronic inflammatory process, in 3 patients the constriction of the distal part of the cholledochus was caused by a cyst in the head of pancreas. On the NLS-shots the obstruction of the biliary duct looked cone-shaped, and its affected part could be visualized all the way along the head of the pancreas including Vater’s papilla area, and was assessed at 5-6 points according to Flandler’s chromatic scale.

In all the cases, a moderate chromogenic density (4-5 points) of dilated biliary ducts and a heterochromous response of Wirsung duct occured. The cysts, where existed, were depicted on MRT and NLS shots and the constricted area of the common biliary duct had an arc-shaped route because of being forced back by the cyst. The NLS allowed to detect a relation between the Wirsung duct and pancreatic cysts. 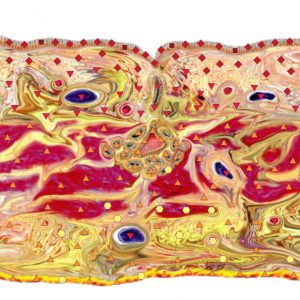 In 1 of the 2 observations of cholangiocarcinoma at ultramicroscanning of intrahepatic ducts, also histologically confirmed later, we drew an erroneous conclusion, because the pattern of MR-changes, i.e., a small ectasia of the intrahepatic ducts by a varicose type above the moderately constricted common hepatic duct, and unaffected hepatic duct more distal from the structure, a rather long anamnesis of the disease (the patient had had itching fits, occasionally icteric integument, decolored feces and dark urine for ten years) and the obscure clinical presentation were interpreted by us (and during ERCPG) as manifestations of a primary sclerogenic cholangitis. 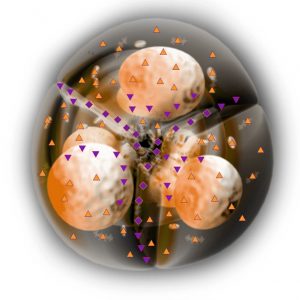 In all three our observations of pancreas head cancer the obstruction of the biliary duct looked at NLS ultramicroscanning as a progressively increasing of negative chromogenic density of the ecstatic biliary duct at the level of its intrapancreatic area. A frank hyperchromogenic pattern of the intrahepatic ducts was concurrently noted. The Wirsung duct was unevenly hyperchromatic too (4-5 points). The structure of the tumor itself could be better visualized on ultramicroscans. The histological investigation confirmed the adencarcinoma in all three cases. 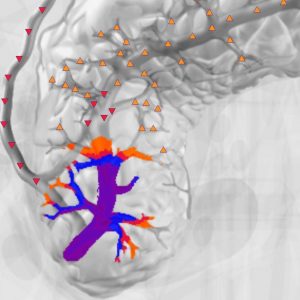 According to some literary evidences, differential diagnostics of diseases of the papillosphincteral region by means of NLS investigation is difficult. In one of our observations of a patient with clinical lab manifestations of obstructive jaundice, NLS detected a distal block of cholledochus with lesions of superjacent regions of the biliary system. The duodenoscopy detected signs of frank papillate of the major duodenal papilla and suspected infiltration of the longitudinal fold of the duodenum. The percutaneous transhepatic cholangiography (PTCG), that was performed additionally showed a picture of stenosed papillosphincteral region. The NLS displayed hyperchromatic intrahepatic ducts and hepaticocholedochus, with the latter traceable as far as the level of entering the duodenum. The threedimensional (3D) NLS investigation performed in a sagittal projection allowed to detect an additional structure with a moderately chromogenic signal in the ampullar region of the cholledochus. It allowed a supposition about a tumorous lesion of the major duodenal papilla. We would like to use this example to stress the importance of a correct methodic approach for carrying out an investigation in a specific diagnostic situation.

Thus, our results were able to show that NLS had great prospects for diagnosing a number of diseases with such a common anatomic-functional concept as a pathology in the hepatopancreatoduodenal region. So, thanks to its noninvasiveness, no need for administering contrasting agents and intervening into the biliary system as well as the aibility to combine with conventional MRT, which substantially increases the diagnostic importance of the method, in quite a lot of cases the NLS investigation can replace radioendoscopic methods of investigation (ERCPG and PTCG) as a primary diagnostics method although the other methods can retain their therapeutic functions. NLS may also become a method of diagnostics choice for patients who have some counter indications to X-rayendoscopic investigation. We believe it necessary to actively expand the use of NLS with a view of making an ultimate decision on its clinical diagnostic importance.