At the present moment liver transplantation is the only radical method of treatment at terminal stages of chronic diffuse diseases of liver. One of the most promising options of liver transplantation in case of deficiency of cadaveric “imported” organs is a transplantation of liver right love acquired from alive relative donor. The advantages of right lobe of liver using as a transplant are: constant anatomic structure of arterial and portal blood supply of a right lobe; greater diameter of right branch of hepatic artery and so it is more convenient for anastomosing; configuration of a right lobe is more convenient for placing in a recipient’s organism and it excludes a possibility of transplant moving in abdomen during post-operative period; resection of donor’s liver limited by hernihepatectomy volume, at the same time medial vein remains as a part of donor’s liver. So this intervention is more attenuated anatomically, than using of a left lobe.

In medical practice comprehensive NLS-study is regarded as one of the most promising methods of hardware diagnostics and monitoring. At the present moment the experience of liver transplantation from alive relative donors is not sufficient, and available references are based on practice on rare transplantation centers where this method is applied. Works on possibilities of integrated NLS-study in evaluation of liver transplant condition and dynamic monitoring of patients during posttransplant period are missing in modern literature. All this has become a reason for carrying out of the present study.

The objective of this work is identifying of NLS criteria for evaluation liver right lobe transplant condition at various periods after transplantation.

During examination we used NLS-ultramicroangioscanning mode and spectral-entropic analysis (SEA), allowing to detect spectral similarity of morphological structures of hepatic parenchyma and vessels with digital models of etalon processes of healthy and pathologically changed tissues.

Integrated NLS of liver right lobe transplant was carried out in accordance with created by ourselves protocol and in included evaluation of transplant’s parenchyma, vessels and intrahepatic bile ducts condition. During monitoring period all recipients were subjected to NLS-ultramicroscannng with SEA of hepatic parenchyma. Results of integrated NLS were supplemented with data of morphological, endoscopic and x-ray researches.

On the basis of data acquired during this study we have developed criteria for liver right lobe transplant condition evaluation, reflecting positive course of posttransplant period. At that we evaluated condition of transplant parenchyma, vessels and intrahepatic bile ducts. Intensity of liver right lobe transplant parenchyma chromogeneity at non-complicated course of post-transplant period was equal or slightly higher than chromogeneity of left lobe and was less than 3-4 points at Fleindler’s scale. 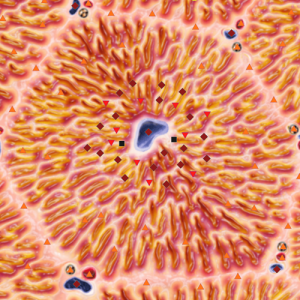 Diffuse increasing of liver right lobe transplant parenchyma chromogeneity was detected only in late post-transplant period in 5 (7.1%) patients and was conditioned by development of transplant’s dysfunction.

Focal changes of liver right lobe transplant parenchyma were detected in late post-transplant period in 3 (3.4%) patients. In all cases it was acute abscesses, accompanied by intensive increasing of chromogeneity (6 points at Fleindler’s scale) in a nidus.

NLS-signs of hepatic artery thrombosis were detected by NLS-ultramicroangiography in 1 (1.4%) patient during early post-operative period.

Non-occlusive thrombosis of portal vein in early post-operative period was diagnosed in 1 (1.4%) patient on the basis of SEA of morphological structure of thrombus in an opening of posterior branch of right portal vein, which did not close opening of this vessel completely. 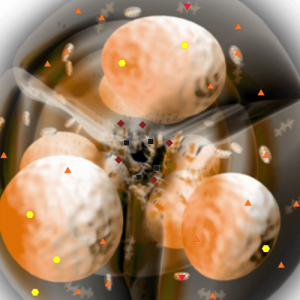 Portal vein stenosis is in an area of portal anastomosis formation according to a data of NLS-ultramicroangiography with SEA.

Inferior vena cava stenosis was diagnosed by NLS with SEA in early post-operative period in 1 (1.4%) recepient, subjected to surgery because of liver cirrhosis developed due to Chiari disease. 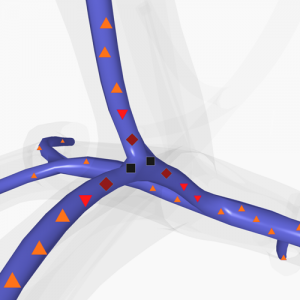 At the present moment in references there is no such concept as regional changes of transplant parenchyma chromogeneity at NLS-studies. Parenchymatous complications are divided into focal and diffuse, but we believe that introduction of concept of regional changes of parenchyma chromogeneity allows to characterize changes detected by NLS more accurately. Also there is no data regarding frequency of parenchymatous complications development.

In our monitoring diffuse increasing of liver right lobe transplant chromogeneity was registered in 5 (7.1%) patients in late post-operative period. Revealed changes were accompanied by increasing of transaminase, cholestasia enzyme and bilirubin levels and were conditioned by development of transplant dysfunction. We believe that NLS with SEA allows to identify a reason of transplant parenchyma diffuse changes development in majority of cases. NLS with SEA data is confirmed by results of clinical and laboratory studies and materials of morphological research of liver biopsy material in 98.6% of cases.

Revealing of liver right lobe transplant parenchyma chromogeneity focal changes (4.3%), in our research it were acute abscesses, promoted identification of reasons of pyretic fever, increasing of cytolysis and cholestasis enzymes and helped to define tactics of further treatment.

Detected NLS-signs of hepatic artery thrombosis confirmed during relaparotomy applied in order to reconstruct arterial anastomosis. According to our data percentage of this serious complication is lower than in studies of our colleagues, who report about higher frequency of hepatic artery thrombosis development, equal to 1.7% – 26%. It can be explained by improving of surgical technique of arterial anastomosis application.

In our studies biliary complications of relative transplantation had leading position among others, which corresponds to opinions of foreign scientists.