We carried out repeated NLS-study of 200 children aged 7 – 14.5 with clinical and laboratory data that did not exclude acute pyelonephritis. We used Metatron-4025 device with 4.9GHz frequency of generator and Metapathia GR Clinical software (IPP, Russia) with a feature of three-dimensional (3D) visualization and spectral-entropic analysis (SEA) of renal tissue structure. We found reliable and indirect NLS signs of renal changes at acute pyelonephritis. Reliable (constant) signs were defined by dynamic morphological stereotype of a disease, that is why they are characterized by staging manifestation in accordance with acute pyelonephritis pathomorphogenesis stages: infiltrative, purulent-exudative (pre-destructive), destructive (tissular lysis) and reparative. NLS-graphic manifestation of these stages determines NLS semiotics of acute pyelonephritis. NLS evaluation of intrarenal changes dynamics with consideration of given semiotics allows to acquire well-timed information about presence, stage, spreading and development of inflammatory process, that may be a basis for treatment tactics choosing.

Well-timed evaluation of changes in kidneys at acute pyelonephritis (AP) is still a pressing issue. Experience of nephrologists, urinologists and other clinicians, including experience in handling of visualizing diagnostics methods, does not always prevents severe clinical course of a disease with development of local purulent-destructive changes against the background of urosepsis down to lethal outcome. As majority of experts note, nothing, except clear and well-timed conclusion about serous or purulent-destructive stage of AP, can be a basis for choosing between conservative or surgical tactics in case management. However, in practice clinicians in majority of cases have no reliable and safe methods to reveal renal changes at various forms of AP and identify speed of their development and spreading. Existing diagnostic methods, such as x-ray, radioisotope scanning, thermography in majority of cases are inapplicable for highly informative and dynamic evaluation of extraperitoneal structures at AP. The reasons were complexity and expensiveness of these methods with, at the same time, subjectiveness of acquired data evaluation or impossibility to apply them due to needs in limitations to radiation exposure.

We believe that medical references have insufficient amount of works on application of NLS study in diagnostics of urorenal pathologies. Only few studies on evaluation of organic renal changes, including nidal manifestations at acute and chronic inflammatory processes were published. However they give no clear methods for revealing and interpretation of renal changes at AP in relation to morphogenesis stages of this disease, leaving open a question about accuracy of NLS-graphy data. Thus a problem of well-timed differentiation of local serous and purulent-destructive changes at AP is still unsolved for therapists and NLS-specialists.

The objective of this work is to evaluate NLS-graphic manifestation of so-called dynamic morphological stereotype of studied disease, in other words – to show NLS-semiotics of AP.

To evaluate intra- and pararenal structures with assumption of AP we carried out NLS of kidneys for 200 patients aged from 7 to 14.5 years with application of agreed algorithm. In order to optimize an image in majority of cases we used 3D visualization mode. All patients were subjected to multiple (at least three) NLS in accordance with agreed methods and application of NLS-ultramicroangiography, which allowed to differentiate clearly affected areas of renal vessels.

Indications for repeated NLS-graphy and setting of a period between studies (minimal – 3 days, maximum – 15 days) were, along with clinical and laboratory data, results of a previous NLS – presence of accurate NLS-graphic signs of nidal manifestations, their spreading and dynamics of revealed changes.

At admission to hospital in all children we detected clinical laboratory and anamnestic data, which did not exclude AP. At the same time only 124 patients (62%) had clinical laboratory diagnosis “AP” or “aggravation of chronic pyelonephritis” prior to the first NLS. In other cases indications for NLS-study were: acute appendicitis – 30 patients (15%); urinary tract infections – 20 (10%); ARVI with abdominal syndrome – 16 (8%); nephrocolic – 6 (3%); renal impaired development – 2 (1%); kidney trauma – 2 (1%). Disease period was from 14 hours to 6 days before the first NLS.

Along with NLS, laboratory studies of blood and urine, all patients were administered to NLS- ultramicroscanning with SEA. Surgical intervention (kidney revision) was carried out in 6 cases, indication for the intervention were symptoms of local or polyorganic spreading of purulent-destructive changes detected by NLS-ultramicroscanning with SEA. We evaluated changes of renal and paranephral structures during surgery. In 4 cases we acquired fragments of tissues for histological study.

After evaluation of dynamic NLS-study results we can clearly single out local NLS-graphic changes accompanying clinical laboratory manifestations of AP. Permanence of these changes allows to define 4 consecutively developing stages of morphological transformations, comparable with stage changes, underlying AP pathomorphogenesis. Along with these stages, defined by specific morpho- dynamic stereotype of a reviewed disease, lately we single out a “zero stage” – a stage of reactive renal changes. This term requires clarification. On the one hand changes during this stage are absolutely non-specific for AP, on the other – typical for it renal manifestations are the reason of overdiagnosis of acute inflammatory renal changes according to data of NLS study. Strictly speaking it is not even a stage, but manifestations of kidney response (just like other parenchymous organs) to any infection. But still we can call it “zero stage”, because at development of “classic” AP kidney has typical for it changes, i.e. undergoes this stage.

Zero stage – responsive. It is characterized by nidal or diffuse transient increasing of parenchyma’s chromogeneity (3-4 points at Fleindler’s scale). It may be related to different in amount interstitial reactive infiltration, which may accompany dozens of pathological conditions of macroorganism – so-called reactive tubulo-interstitial manifestations (or – secondary tubulo-interstitial response). Its main difference from other stages – intact walls of collector system of a kidney.

First stage – infiltrative. It is characterized by a combination of two constant signs. One of them – transient heterogeneity of parenchyma with increasing of its chromogeneity due to swelling of interstitial tissue and massive leukocytic infiltration, which happens during first 4 days of pyelonephrotic attack and is typical for acute serous pyelonephritis. Severity of these edematic-infiltrative manifestations can be evaluated by hyperchromogeneity of pyramids in 3D mode: in the most severe cases of pericanalicular infiltration pyramids may have more intense chromogeneity than cortical areas.

Second stage – purulent-exudative (pre-destructive). It differs from the previous one by manifestation in parenchyma where edematic-infiltrative manifestations are the most signoficant, hyperchromogenic nidi (6 points at Fleindler’s scale) of irregular shape and small size (not more than 1-2-4 mm at the initial detection), associated with areas of purulent exudation. They have no strict location, and are visualized both in medullar and cortical areas of parenchyma with prevailing affection of the latter. At NLS-ultramicroangiography we saw significant affection of bloodstream in these exudative (pre-destructive) nidi.

It must be noted that this stage is a short one – from several hours to 1 or 2 days; it does not correlate with any clinical-laboratory manifestations of the disease, especially with the background of anti-bacterial treatment. In relation to AP pathomorphogenesis stages, this stage may be considered as a border-line between purulent non-destructive (exudative) process and a beginning of nidal lysis of tissues. A tendency to increased sized of detected pre-destructive nidi and decreasing of their chromogeneity (i.e. further “softening”) evidences about transition to a stage of destruction. 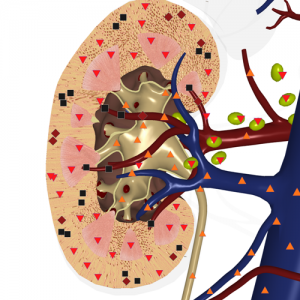 Third stage – purulent-destructive. It differs in the fact that there are achromogenic (“liquid”) nidi in parenchyma, which are associated with local manifestations of histolysis. These inclusions may be an aposthema, a carbuncle, an abscess or urine extravasate (as a result of nidal inflammatory destruction of a collector system wall). They may be manifested in any combination, occupying various spaces of a parenchyma. If these nidal changes are accompanied by presence of a disperse component in an opening of dilated fragments of collector complex, we can conclude about presence of nephropyosis. Tissular NLS ultramicroangiography of a parenchyma, destruction nidi are characterized by total affection of vessels along the depth of vascular wall. 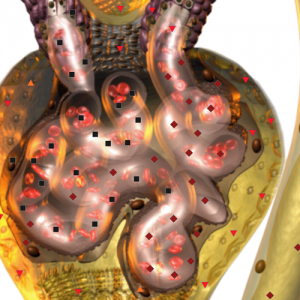 Fourth stage – reparative. It is characterized by stopping of development of spreading of inflammatory transformations, noted during previous stages, and their regression. If reparation starts during infiltrative stage, it usually ends within one month with complete restoration of intrarenal structures and their interrelations.

Reparative process at purulent-exudative (pre-destructive) changes continues for 1 month. In major part of patients with primary AP it leaves no structural manifestations. However in some patients reparation, developed after acute pre-destructive manifestations, resulted in stable nidal changes against the background of complete recovery. These changes represented static, different in size and shape nidi of moderate chromogeneity in parenchyma tissue and renal sinus, and evidenced about development of nidal fibrosis, we believe.

Duration of reparative stage at purulent-destructive manifestations of AP almost did not depend on treatment method (surgical or conservative) and was at least 3 months. It peculiarities are intensity and variety of intrarenal structures affection, reflecting local or diffuse fibro-sclerotic changes.

As sign of developing of a carbuncle or an abscess was appearance of separating moderately hyperchromogenic (4-5 points) beads, which was evaluated as formation of destructive nidus wall. These beads become similar in density with a content, decrease in size and as a result a scar is formed. Cicatrical changes at the spots of carbuncles may manifest themselves as intense local retraction type deformation of kidney shape. In some cases at the spot of the most severe purulent-destructive manifestations in parenchyma, we detected formation of achromogenic cystic cavities of small size. 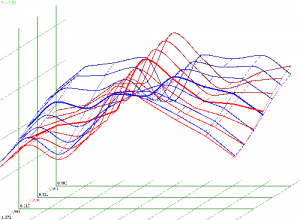 In addition to mentioned constant (reliable) stage NLS-graphic manifestations, AP is accompanied by the whole set of intra- and extrarenal NLS-signs, singled out as indirect ones. These signs, without correlation with reliable NLS-signs, cannot give accurate information about presence, stage, intensity and volume of renal structures affection. Indirect NLS-signs do not depend on clinical and laboratory manifestations of a disease and stage of AP morphogenesis. Their importance, despite frequent intensity, increases only in combination with reliable local NLS-signs of a disease.

All above mentioned may be concluded as follows:

Application of high-frequency NLS-technologies, providing visualization of vascular pattern, allows to detect with high degree of sensitivity (up to 100%) a number of reliable and indirect NLS-signs, accompanying laboratory manifestations of AP. We saw no dependence of these signs on sex and age of patients, etiological aspect, and the fact either it was a primary attack of AP or aggravation of a chronic process.

Identified as reliable NLS-graphic changes of renal structures and staging of their development are defined by dynamic morphological stereotype of AP, they completely associate with manifestations of the disease pathomorphogenesis. It allows to speak about NLS-semiotics of AP, assuming NLS-graphic stages of renal changes: infiltrative, purulent-exudative (pre-destructive), purulent-destructive (lysis of tissue) and reparation stage.

Results of the first NLS-study of a patient with assumption of AP, taking into consideration knowledge of NLS-semiotics, give a possibility to acquire necessary information about presence, stage, spreading of inflammatory process in a kidney; following monitoring of detected changes allows to judge about dynamics of the process – its development speed and spreading.