Evaluation of regional lymph flow areas at investigation of oncological patients has a principal meaning in definition of treatment tactics and prognosis of disease course. Knowing of lymph flow ways allow to carry out targeted search for metastatic-changed lymph nodes in patients with malignant neoplasms. Specification of location and number of detected changed lymph nodes gives a possibility to specify a stage of a tumorous process.

Study of regional lymph nodes usually carried out on the affected side, but sometimes on contralateral also, at lymphogranulomatosis, Non Hodgkin lymphom, leucosis and others it is recommended to fulfill examination taking into account possible affection of various lymph nodes.

With NLS we identified chromogeneity of lymph nodes in accordance with six-point Fleindler’s scale, size of a nidus and its structure.

In normal condition lymph nodes represent formations of bean-like, oval or tape-like form and are located in groups consisting of several nodes.

Size of lymph nodes depends on age of a studied person, peculiarities of his physique, etc. In clinically healthy people lymph nodes up to 3.5 cm may be found. There is a difference in size and shape of lymph nodes of various regional groups and lymph nodes located in various areas of one and the same person.

Shape of lymph nodes generally depends on their topographoanatomical relations with surrounding organs, usually it is slightly oblong and flattened, a little prominent on the one side and minor pit on the other, resembling a bean. Sometimes shape of a lymph node may be roundish. In senile aged patients tape-like shapes of lymph nodes can be found, which may be regarded as a result of lesser nodes merging. In areas limited by fascias (for example in occipital region), nodes are more long than those located in loose tissue (for example, axillary).

Chromogeneity of lymph nodes is evaluated by relation to surrounding tissues (cellular tissue, most often) and can be divided into high, medium and low (hyper- or hypochromogenic, iso- or achromogenic lymph nodes).

A lymph node is covered with connective capsule, which is represented by hypochromogenic frame with even contours (wave-like contour is quite frequent, in depends on a structure of a capsule). A capsule, surrounding lymph node from all sides, as a rule, gets thicker in an area of node’s portal; trabecules, or connective septas, go from internal surface into depth of a node.

A number of portals in nodes is different. So, in deep cervical nodes, there are two portals, in central axillary – 1 or 2, in superficial inguinal – 1. One artery and two veins are located in portals of lymph nodes. Artery enters a lymph node through a portal, goes in trabecules, branches in a capsule, forming circumflex branches on the internal surface of a capsule. Veins go out from a node through a portal.

Interrelation of a lymph node with surrounding tissues means a collocation of a node and surrounding tissues: absence of a link or preserving of a capsule, presence of a connective tissue between a lymph node and other structures; adhesion or contact with an organ (vessel, etc.) without breaching of its integrity; involvement into tumorous process.

In elderly people a reduction and hardening of lymph nodes is detected, some of nodes merge together (in elderly people large nodes are usually found). At the same time there is a replacement of large areas by fatty tissue. Fatty infiltration destroys a capsule of a node in senile age. Lymph nodes with fat (often peripheral ones) look like roundish or oval structures with moderately chromogenic heterogeneous (sometimes netlike) central part and relatively thin hypochromogenic frame. A capsule of a node may be seen fragmentary.

For the sake of convenience non-specific lymphadenites are differentiated in the following way:

Responsive changes, developing as a response to various pathological processes in an organism (inflammatory process, vaccination, etc.) are accompanied by affection of a lymph node, change of its capsule, damage of cortical and paracortical areas, which leads to increasing of chromogeneity; in a lymph node there can be single achromogenic “cystic” structures; abscess formation may be revealed later. It must be taken into account that changes in lymph nodes located near a tumor, may be manifested by non-specific reaction of inflammatory character. 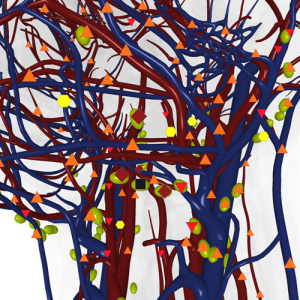 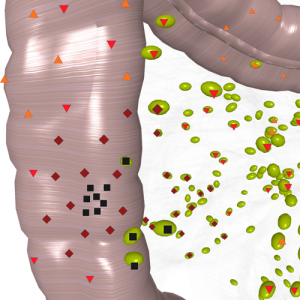 We believe that vessels in an inflamed node are of more hyperchromogenic character (6 points at a Fleindler’s scale) than vessels of a metastatic-changed lymph node, which are usually hyperchromogenic (4-5 points).

In a major hyperplastic hyperchromogenic lymph node vessels of peripheral areas are more changed that those in a center of a node.

At hyperplasia, in case of positive result of a treatment, lymph nodes become less chromogenic, changed areas of become lesser. At chronic lymphadenitis we often detect affection of a capsule (5-6 points) and its merging with surrounding tissues. 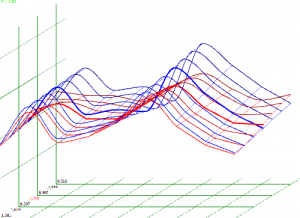 At malignant processes in lymph nodes, central achromogenic area is visualized most frequently, which corresponds to diffuse or total replacement of central areas by necrotic tumorous tissue. In certain cases at metastatic affection of a central part of a lymph node only, it may look unchanged, because an imitation of healthy lymphoid tissue happens (it is often detected at well differentiated squamous cell cancer and other types of cancer, which are accompanied by coagulation necrosis in case of ischemic degeneration). Sometimes a lymph node may be represented as totally achromogenic formation. Although the latter is true for fatty infiltration, in these cases tumorous genesis of changes cannot be excluded completely. In this case only SEA will help to set a diagnosis.

In metastatic-changed lymph nodes affection of vessels with atypical vascular pattern may be detected (chaotically placed vessels with arteriovenous shunts). 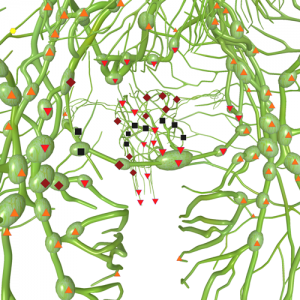 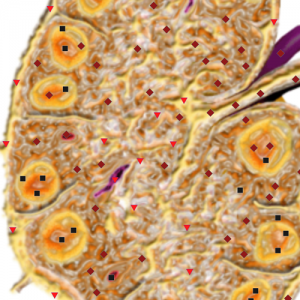 Extracapsular growth of metastases in lymph nodes often leads to merging of several affected lymph nodes into a conglomeration and involvement of surrounding tissues into tumorous process. Involvement of adjoining organs into a tumorous conglomeration must be identified by SEA of their morphological structure.
According to our data NLS is efficient in evaluation of lymph nodes changes in dynamics.

While evaluating a condition of lymph nodes, a therapist must be aware that a presence of a changed lymph node may evidence both hyperplasia of the node and its metastatic affection, however at multiple tumorous affection metastases may belong to different tumors.