The latest computer technologies has become a basis for revolutionary transformation of classic two-dimensional scanning (2D) in real time mode. The result was creation of three-dimensional NLS-graphy (3D).

In 2000’s the Institute of Practical Psychophysics (Omsk) strted development of a new method, allowing to render three-dimensional (3D) reconstruction of an NLS-image. For the first time 3D images was used in computed tomography for reconstruction of bone structures in craniofacial surgery. The pioneer of the 3D is Kretztechnic AG Company (controlling interest belongs to Medison Corp.) which created in 1989 the first commercial device Сombison 330 able to carry out multiplanar reconstruction of data in three orthogonal projections with use of special 3D-sensors for transabdominal and transrectal scanning.

The advantages of 3D-NLS, setting it apart from CR and MRI, are absence of ionizing radiation, safety, non-invasiveness and relatively low price. The greatest advantage of 3D-NLS is a possibility to get ultrathin sections which are invisible at routine scanning and in precise evaluation of affected nidus condition with use of specialized programs for 3D scanning: Deep Vision, Fast Vision and ultramicroscanning with a possibility of spectral-entropic analysis (SEA) applying. Besides this method allows to manipulate acquired data, i.e. transform, rotate, zoom in and out of structures, recreating true anatomy of organs in direct projection. However today there is still no decisive answer to what role this method plays in diagnostics and what additional to 2D information it can provide?

3D NLS-graphy has found its place in diagnostics of digestive organs diseases also.

In developed countries CT, MRI and ultrasound methods, complementing each other and sometimes competing, have become obligatory visual methods applied in hepatology. At the same time, NLS-graphy, while being not the most widely spread method, has certain advantages: better ability to present general panoramic image of large structures, no chance of artifacts, usually appearing when a ray comes through gas, bone or fat, typical for all ray-investigation mathods.

In certain clinical situations awareness of liver condition is crucial. It is known that both own and transplanted liver tissue can regenerate, that is why visual methods gradually becoming a part of this process monitoring. Although today MRI and volumetric CT are used in this case more frequently, 3D NLS-graphy has great prospects, allowing to replace in the future these very expensive, complex and radiation related (CT) methods. It is very advisable, because in this case a clinician could check-up patient after, for example, liver transplantation many times.

S. Wagner et al., have carried out 2D and 3D NLS study of 93 patients with chronic diffuse hepatic diseases and compared results achieved with both methods. 3D exceeded 2D NLS study in evaluation of hepatic vessels and gall ducts condition. 3D NLS data was found to be more informative in diagnostics of Budd-Chiari syndrome, primary sclerosing cholangitis, but it did not give additional information for differential diagnostics of chronic diffuse hepatic diseases.

According to G. Esmot 3D NLS is a perfect method allowing to evaluate liver condition at cirrhosis; in this case acquired image is rather close to an image acquired at laparoscopy.

The greatest achievement of methods allowing to visualize nidal changes in liver is the development of 3D NLS. H. Leiss et al., have proven that 3D NLS gives in consecutive studies more precise and repeatable results of focal hepatic affections changes than 2D NLS and even CT. It is very important, because an amount of planned treatment depends on a condition of affected area. As soon as results of 3D NLS are comparable to results of CT, 3D NLS may be used for dynamic monitoring of patients as an alternative for CT. 3D NLS may be useful in monitoring of patients with inoperable tumors or, vice versa, at planning of liver resection amount, definition of tumor and major hepatic structures topography, volume of healthy hepatic parenchyma, remaining after resection. Using 3D NLS it is possible to determine direction of a needle at interventional procedures, including biopsy, aspiration, injection of therapeutic agents. The method allows not only to diagnose, but to get accurate evaluation of echinococcus cyst condition, carry out it aspiration, alcoholisation, and, if necessary after evaluation of treatment effect, reaspiration.

A special advantage is a possibility to get accurate evaluation of hepatic vessels, including tumorous ones (character of tumor vascularisation is a criterion of its growth and invasiveness, that is why such information may be decisive). Alternative CT method, allowing to get high-quality image of vascular structures without adverse side effects, is NLS-angiography. Application of SEA and NLS-ultramicroscanning of tumors presupposes promising results, but until now this question is still unanswered.

According to G. Eamat and M. El Raziky, 3D NLS study renders invaluable help in diagnostics of chronic liver diseases in patients with ascites due to venoocclusive diseases, when obliteration of hepatic vein and minimal irregular blood flow are registered.

Splenomegaly is the most frequently diagnosed pathological condition of a spleen. Its focal affections, conditioned by malignant of benign tumor, as well as cysts are easily identified by 3D NLS.

3D NLS exceeds 2D in evaluation of spleen, allowing to identify its condition, first of all volume of affection, with high precision. Easily produced high-quality 3D NLS image of spleen in NLS-ultramicroangiography mode helps to provide quick and accurate diagnosing of its infarction or trauma. 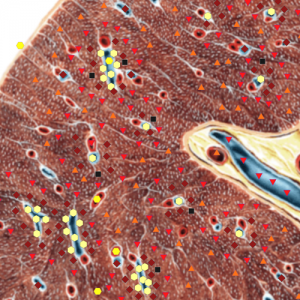 Pic. 2. NLS-ultramicroscanning of spleen.
Interactive image if multiple cysts of spleen in case of its vascular anomaly.

M. Sackman et al., after applying of 3D for investigation of patients with neoplastic affections of pancreas and calculous pancreatitis, have concluded that the method is extremely useful for identification of tumor spreading degree and its invasion into surrounding tissues. Stones in pancreas are diagnosed well also.

3D NLS helps in detection of peripancreatic cyst due to formation of pseudocyst (which is important for dynamic monitoring in this group of patients) or tumor, and in precise evaluation of intrapancreatic lesions.

The authors informed about advisability of tumor volume detection in order to decide about possible application of radical surgery at periampular cancer. However the question whether 3D NLS gives more precise measurements than CT or ultrasound in this group of patients or not, is still unanswered. 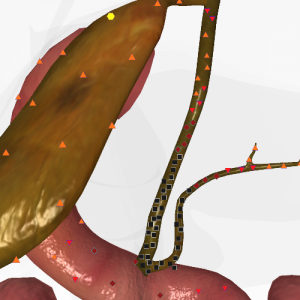 The authors believe that 3D NLS is a promising method for revealing of pathognomonic changes of biliary three at primary sclerosing cholangitis.

NLS-graphy allows to study in details a wall of gastrointestinal tract, surrounding organs and structures. 3D NLS, while improving visualization, promotes identification of true topographic relations and a nature of pathological formations. It is a clinically sifnificant method for diagnostics of local tumorous affections and diffuse changes of intestine and stomach walls, detection of intraluminal pathology.

NLS-graphy of an intestine with use of three-dimensional reconstruction may become a procedure of special significance in diagnostics of hollow organs. We found that this method is more accurate than 2D NLS-graphy, because it allows to get multiple and strictly space-oriented crosscuts. 3D NLS helps at definition of a tumor condition and measuring of its length (for example a distance from an end of a rectum tumor to external sphincter, which, in the end, determines selection of amount and method of surgical intervention).

3D NLS made technically possible application of NLS-graphy in diagnostics of esophagus affections, extending possibilities of the method in identification of a cancer stage. 3D reconstruction contributes greatly into interpretation and quantitative analysis of a situation requiring introduction of a stent at esophagus cancer. J.Lin and D. Goldberg in a preliminary study have demonstrated a possibility of 3D reconstruction of data acquired by application of NLS-ultramicroscanning; at the same time 3D NLS-ultramicroscanning turned out to be more precise, than spiral CT at evaluation of esophagus cancer.

3D NLS-graphy of a stomach with SEA allowed us to diagnose malignant ulcer in greater curvature of the stomach and prove involvement of regional lymph nodes. 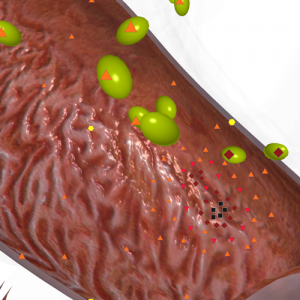 At progressing neoplastic process and development of small intestine ascite, intestinal peritoneum, greater and lesser omentum may be successfully visualized.

N. Hunerbein et al., after studying of 3D NLS-graphy’s role in investigation of 100 patients with rectum cancer, concluded that this method allows to evaluate areas of affection in various projections and crosscuts, which is practically impossible for traditional 2D NLS-graphy.

G. Esmat and М. El Raziky, after analysis of study results of 39 patients with ascite, concluded that 3D NLS is a method of choice at this pathology. Moreover, the authors attempted to identify etiology of ascite. So they managed to describe pathognomonic signs of tuberculous ascite, when in almost all cases affected intra-abdominal lymph nodes were visualized. 3D NLS with SEA allowed to carry out a differential diagnostics between tuberculous and malignant nature of lymphoadenopathy in 98% of cases.

We must emphasize that area of clinical application of 3D NLS is being extended, because the method provides anatomical reconstruction of researched area (organ, structure), acquiring of most accurate results at evaluation of organ’s condition, analysis of ultrathin crosscuts, visualization of which is impossible at routine scanning. The information saved entirely, so it is possible to reconstruct it many times without any time limitations and in absence of a patient (patient feels no discomfort and inconvenience).

Doubtful and questionable results of scanning may be re-analyzed in details and with involvement of experts, who can give independent interpretation of saved multidimensional image.

Application of 3D NLS looks very promising first of all in oncology, because improvement of computer diagnostic software, introduction of SEA of tumor structure, visualization of its surface in three dimensions, and future increasing of resolution capability of a method thanks to development of new high-frequency devices, will improve not only primary diagnostics of neoplastic affections, but finally allow to carry out differential diagnostics between malignant and benign nature of neoplasms.

Introduction of three-dimensional reconstruction at 3d NLS, especially at application of high-frequency devices of Metatron class manufactured by the IPP, can give morphological evaluation of gastrointestinal tract wall condition.

3D NLS has prospects for allpication not only in major regional centers, but at early stages of medical assistance as well. Appearance of new equipment will stimulate and extend areas of 3D NLS application. The evidence of this is a breakthrough made by IPP (Institute of Practical Psychophysics) in 2008. For the first time a system for non-linear diagnostics Metatron-4025 with Metapathia GR Clinical software capable of creating of three-dimensional reconstruction in real-time mode, was introduced in the market.