Possibilities of NLS-research in diagnostics of Crohn’s disease

Crohn’s disease – is a chronic recurrent disease of a gastroenteric path of unclear aetiology, characterised by transmural segmentary distribution of inflammatory process with development of local and system complications. The problem of this disease constantly draws researchers’ attention to it due to growing of disease incidence for last 3 decades. Growing of disease incidence, primary affection of young able-bodied persons, serious complications leading to early physical inability, all these aspects make this problem not only medical, but social one. All this explains an urgency of profound studying of this disease. Location and extent of pathological process in an intestine, activity of disease, presence of complications have a great importance for definition of medical tactics at Crohn’s disease. Crohn’s disease proceeds wavy, with alternation of the periods of an aggravation and remission. The information about degree of inflammatory process activity can help with adequate treatment of these patients. At Crohn’s disease it is difficult enough to identify degree of the process activity, as the condition of a patient depends not only on expressiveness of the process in intestines, but also on the presence of accompanying complications, such as infiltration, abscess, fistulas, strictures, and even on a psychological condition of a patient.

To identify Crohn’s disease degree of activity a Best’s index is used. Except Best’s index there are also conditional biological markers of expressiveness of inflammatory process, such as C-reactive protein, erythrocyte sedimentation rate, number of platelets, fibrinogens, and also endoscopic and contrast methods of research. However instrumental methods of investigation have the lacks related to a risk of disease aggravation during preparation for given inspection and an irradiation. NLS-diagnostics method has no such flaws.

Medical references contain information about NLS-research application in diagnostics of diseases of an intestine.

These researches have shown high informativity of a method at oncological diseases of intestines. Possibilities of NLS-graphy at Crohn’s disease in diagnostics of process location, revealing of complications, definition of process activity were never studied, according to our data.

For the first time NLS-research of intestines has been fulfilled by T. Kuznetsova et al. in 2000 in order to develop NLS differential diagnostics of timorous affections of distal parts of large intestine.

Therefore there is a necessity to study real possibilities of NLS research method in diagnostics and differential diagnostics of Crohn’s disease of large and small intestine, with application of new technologies of modern diagnostic NLS-devices. In this work we studied diagnostics of inflammatory process location and its activity.

According to the objective we have surveyed 114 patients with Crohn’s disease of 16 – 73 years old (average age 33 years), among them 53 men and 61 woman. Crohn’s disease proceeded in form of ileitis in 31 case, ileocolitis – in 40, colitis – in 43. Due to inefficiency of conservative therapy and development of complications 61 patients were operated. Endoscopic research was applied in 93 cases, radiological – in 76. Due to severe pain syndrome, full scale colonoscopy was not possible in 12.9% of cases.

NLS-research was carried out with devices “Metatron”-4025 with the professional program “Metapathia GR Clinical” (manufactured by Institute of Practical Psychophysics, Russia) with nonlinear sensor working of 4.9GHz frequency. During the research we identified chromogeneity of intestines tissues on six point color Fleindler’s scale and a condition of a vascular channel.

Thanks to application of 4D-Tissue mode and ultramicroscanning three-dimensional NLS-graphy allows to study an intestinal wall layer-by-layer, to specify location and extent of pathological process.

Statistical processing of gathered data was carried out in accordance with standard methods. Distinctions were considered authentic at p ≤ 0.05.

To elaborate NLS-semiotics of intestine wall inflammatory changes 29 postoperative macropreparations after various operations at Crohn’s disease were studied. The received results of NLS-researches were compared to data of pathomorphological researches, surgical review, colonoscopy and roentgenography.

RESULTS OF THE STUDY AND DISCUSSION

At NLS-research of intestines we paid attention to chromogeneity of an intestinal wall, its structure, distribution of layers, extent of inflammatory process.

As our researches have shown, for Crohn’s disease following NLS-signs are typical.

1. Damage of an intestine wall. It is necessary to notice that wall damage happened in all layers (97.2%), which evidences transmural affection. However in 2.8% of cases changes were detected in mucous-submucous layer. At acute inflammatory process we detected affected lymph nodes of average chromogeneity (4-5 points on Fleindler’s scale) in paraintestinal fiber.

On the basis of the comparative analysis of NLS-graphy results and pathomorphological researches we have developed a method of NLS-diagnostics of intestines ulcerous affections. At inflammatory process in an intestine, both at Crohn’s disease, and at ulcerative colitis, we marked changes of intestinal wall structure and its chromogeneity. These researches were carried out in a small number of patients with Crohn’s disease. Kuznetsova T.G. et al. has described changes of intestinal wall structure in the form of affected hollow organ symptom, on the basis of which it is possible to carry out differential diagnostics of intestines diseases. We have also revealed other changes in an intestine wall, such as hyperchromogenic inclusions, total affection of a mucous layer, narrow and wide defects of submucous layer, and have proven that such signs are typical for ulcerous affection.

3. Presence of pathologically changed vessels. NLS-angiography have shown expressed changes of intestine wall vessels in 52.6% of cases, in 17.9% – average expressiveness of changes, in 11.6% – minor changes, in 17.9% of patients affection of vessels was not identified. Severe changes of a vascular wall evidence activity of inflammatory process. We have also investigated quantitative characteristics of a bloodflow in an intestine wall at inflammatory process, such as an index of resistance and speed of a bloodflow, which were compared to the results of central haemodynamics. We have found mechanisms of bloodflow abnormalities in an intestine wall, depending on expressiveness of inflammatory process according to NLS-graphy.

4. Presence infiltration, fistulas, strictures and perianal complications, diagnostics of which will not be given in this article. 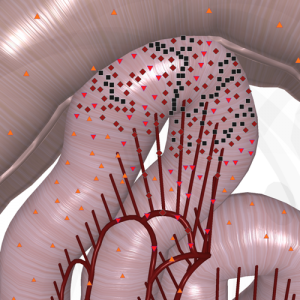 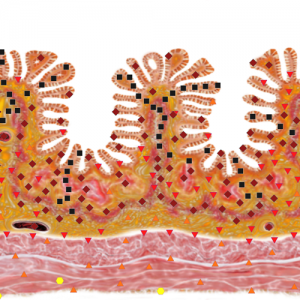 As it seen from the Table 1, data of NLS and other methods of research completely coincide at colitis, but at affection of twisted intestine only, it was possible to locate inflammatory process by NLS-research in 29 of 31 (93.5%) cases. In 2 cases NLS-graphy detected inflammatory changes not only in small intestine, but in large intestine also. The retrospective analysis of these cases has shown that they are caused by insufficient experience of an expert who worked at the initial stage of work. At affection of large and twisted intestine location of inflammatory process was established correctly in 38 of 40 (95.0%) cases. During analysis of false-negative results it was established that in one case failure has occurred because of shortening of the right parts of large intestine and a high arrangement of head of blind colon (changes in twisted intestine about 3 cm long were considered to be changes in large intestine). In other case NLS-research was carried out on next day after colonoscopy that has complicated evaluation of intestinal wall structure. It means that NLS-research must be carried out in 2–3 days after carrying out of other instrumental methods of diagnostics. Thus, we have proven high informativity of diagnostics of inflammatory process location.

Table 1. Results of various methods of research in diagnostics of inflammatory process location at Crohn’s disease.

At the second stage of work we have studied possibilities of NLS-research in revealing of destructive changes in small and large intestine at Crohn’s disease. We took endoscopic research for “the gold standard”. Stages of endoscopic changes at this pathology (remission and aggravation stages (aphthoid ulcer, ulcers, ulcers-cracks, scarring) were considered as the basis of NLS-research results analysis.

Thus we used a complex of the NLS-signs including presence of pathologically changed vessels and change of intestinal wall structure (Table 2).

Table 2. A comparative evaluation of NLS-research results with endoscopy data depending on a stage of inflammatory process

The following data was obtained by comparison of NLS-graphy data and results of endoscopic researches.

1. At endoscopic remission the structure of an intestinal wall was not changed in 93.3% of cases, affection of vessels was not detected (in 73.3% of patients) or was minor (in 26.7% of patients).

In 1 patient with remission of inflammatory process and pseudopolyposis we revealed ulcerous defects in the form of single hyperchromogenic inclusions in submucous layer, at the same time vessels affections were not expressed. It means that NLS-signs should be used only altogether for definition of an inflammatory process stage. NLS-research of this patient was carried out on next day after colonoscopy, and gas between pseudo-polyps in segmented intestine was taken for achromogenic cavities in a mucous layer. This case also says that NLS-research should be applied before colonoscopy or in 2–3 days after it.

2. During aggravation stage we noted affection of a vascular wall, which in 64.7% of cases was severe. Changes of intestinal wall structure were revealed in 82.4% of patients, that corresponded to endoscopic stage of ulcers and ulcers-cracks. However it should be noted that during aphthoid and scarrings stages (17.6% of patients), no pathologically changed vessels were observed in the presence of affected wall.

For definition of correlation degree between NLS-signs (a condition of an intestinal wall, vascularisation) and stages of endoscopic changes at Crohn’s disease we used rank correlation method of Spearman. For optimization of NLS-signs calculation depending on expressiveness of the process they were assigned with a certain amount of points. Undamaged intestinal wall was marked with 1-2 points.

Normally, changing of vessels in an intestinal wall is not detected by NLS-research, at inflammatory process pathological change of a vascular wall is registered. For evaluation of a vascular wall pathological affection degree we have singled out certain levels of vascularisation. A certain amount of points was assigned to each degree: absence of pathologically changed vessels – 0-1 point, visualisation of 1-2 focuses – 2-3 points, 3–5 focuses – 4-5 points, major changes of vessels (> 5 focuses) – 6 points.

In accordance with changing of an intestinal wall structure we have chosen some degrees of its affection, each was assigned with a certain number of points:

2nd degree (changes of intestinal wall structure in a form of hyperchromogenic inclusions in a mucous layer) – 3 points;

3rd degree (changes of intestinal wall structure in a form hyperchromogenic inclusions in mucous and submucous layers, longitudinal defects in submucous layer or total affection of a mucous layer) – 4 points;

For convenience of calculation endoscopic researches results were estimated in points taking into account severity of a disease.

During statistical processing of a material it was found that between a complex of NLS-signs of inflammatory changes in an intestinal wall and endoscopic stages of inflammatory process, a strong correlation linl exists, and it is authentic (r = 0,82 at р <0,001).

Unlike endoscopic and radiological methods of diagnostics, NLS-research can be applied without limitations, as it is safe for the patient. For acquiring of high quality information, NLS-research of intestines should be done before endoscopy or in 2–3 days after endoscopic research.