A victory in professional sports is built of many little things. A contribution of a team’s doctor to the general success is conditioned by efficiency of diagnostic techniques in timely revealing of factors limiting physical activity and, accordingly, by efficiency of their correction.

One of functional reserves of skeletomuscular system in cyclic sports is related to a phenomenon of asymmetric force exertion. This aspect is the most actual in cycling. A dissatisfaction with standard possibilities of sports medicine in diagnostics of the reasons of a muscular disbalance stimulated team’s doctors to search for new techniques.

There were several basic inducing reasons of this search:

1. Periodically carried out standard clinical and functional tests showed “normal condition” in the overwhelming majority of sportsmen. However clinical concept “healthy” within the limits of general norm is not a guarantee of stable performance of a sportsman. In the majority of these healthy bicyclists elements of non-optimum statics and difference in some muscles volume are visually detected. Thorough interview has revealed minimum periodic conditions of discomfort in digestive system, upper respiratory ways or a backbone, perceived by sportsmen as normal. Applied manual therapy not always has a long-lasting effect, therefore the disbalance of muscles returns.

2. Modern requirements to diagnostics of a functional condition of a sportsman are: promptness, informativity and reliability based on logically constructed system of simple and easily performed tests. De facto, diagnostic possibilities of the majority of team’s doctors in “field” conditions are limited by the thermometer, a tonometer, a phonendoscope and the portable electrocardiograph.

3. Trainers and sportsmen associate team’s doctor, first of all, with medicaments, but possibilities of urgent medicamentous restoration during races in Europe are limited with every year. At the moment provisions of the L’Union Cycliste Internationale (UCI) forbid any injections during competitions.

4. Completeness of applied pharmacological maintenance of sports activity is basically limited to personal empirical experience of a doctor. A method of vitamins, minerals and basic nutriceuticals deficiency detection in «field conditions», taking into consideration specific features of a sportsman, is vitally important.

5. A method of quantitative estimation of racer’s strength does not guarantee proper endurance during many-days race. More intense fatigue develops in those sportsmen with frequently recurrent muscle disbalance. A method of qualitative evaluation of a sportsman’s muscles condition is of high-demand.

6. Psycho-emotional stress of professional sportsmen is extremely high, but there is no diagnostic and correctional methods improving a resistance to such stresses, which can be used in “field” conditions.

Evaluation of nonlinear diagnostics possibilities in revealing of tone-strength muscular disbalance reasons, forming non-optimum motional pattern of pedalling in healthy bicyclists and efficiency of its restoration.

Fig. 1. Activating of muscles during rotation of pedals. A figure is taken from «I.E. Faria and P.R. Cavanagh», 1978, The physiology and biomechanics of cycling (New York: Wiley)

Studies were carried out with participation of 86 sportsmen of professional and continental cycling teams “KATUSHA”. 23% of racers are members of Russian highway and track national team. All men, aged from 19 to 38, recognized as healthy according to results of standard medical examination. 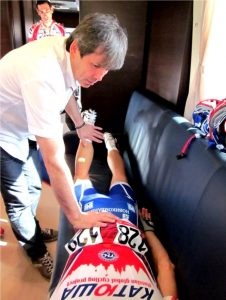 Instrumental: cycle ergometry testing of force exertion symmetry to pedals and a saddle, nonlinear (NLS) diagnostics by means of the certificated portable hardware-diagnostic complex “METATRON”-4025 manufactured by the Institute of Practical Psychophysics. Unlike the Voll’s electropuncture diagnostics method where the energy potentials of the organs and systems are measured via bioactive points, with non-linear diagnostics the evaluation of the organ’s condition is done immediately based on the resonant amplification of investigated organ’s emission and reading the parameters noncontactly by of using trigger sensors.

RESULTS OF THE STUDY

We revealed signs of asymmetry and torsion of body regions of a different degree in statics in 100 % of bicyclists. Visual diagnostics of a dynamic stereotype revealed abnormalities of tone-strength balance of agonist and antagonist muscles of typical motor patterns and advancing inclusion of synergists, neutralizers and fixator muscles into motion. A chest type of breath prevailed over a belly type.

Manual diagnostics revealed functional blocks in cervicothoracic and lumbosacral passages, torsion of a basin with relative shortening of lower extremity in 83% of sportsmen. In 3 racers true shortening of shin or hip bones from 6 to 10 mm was confirmed by X-ray.

In 20 main sportsmen cycle ergometry testing helped to study force exertion to pedals and a saddle. The difference in force was from 5% to 15%.

Fig. 4. Example of research report of E.Vorganov. Right lift-off leg is weaker by 13.4%, dissymetric position on a saddle.

Manual muscular testing of basic muscles involved in a “pedalling” pattern revealed in 1/3 racers weakness in: extensor pollicis brevis, heads of gastrocnemius and quadriceps, lumbar quadrate muscle, lumboiliac, dorsal gluteal muscle and a muscle pulling deep fascia of thigh. Testing of racers in sitting position with closed fingers (on a handle) has increased 2 times a number of findings of muscular weakness.

Thus, working position on a bicycle is a diagnostic provocation for presence of structural, biochemical, emotional or energy problems. This effect of muscular disbalance strengthening is also topical for hockey, tennis, rowing and other sports. 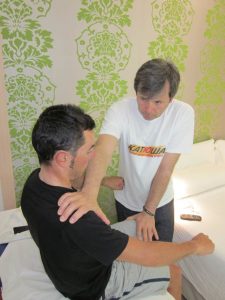 We followed the algorithm of kinesiologic diagnostics and revealed the following in these sportsmen: pachymeninx torsion signs, a spasm of phrenic diaphragm, cranial abnormalities, dysfunctions of temporomandibular joint and lower ribs, signs of nervus vagus and accessory nerve in jugular aperture compression, dysfunction of internal organs, dysfunction of proximal syndesmosis of shin and fibular bone heads, displacement of ankle bone and others.

At a following stage we searched the main reasons of the revealed muscular disbalance. In 75 % of sportsmen the main reason of associated muscles weakness were biochemical abnormalities, developing from affected organs. Along with kinesiologic diagnostics we applied method of nonlinear diagnostics in order to identify further search of limiting biochemical factors.

In all studied patients “Metatron” system has registered different degree of abnormalities of muscles functional condition severity. In most cases stress of regulatory mechanisms was revealed in those muscles which kinesiologically were evaluated as weak. 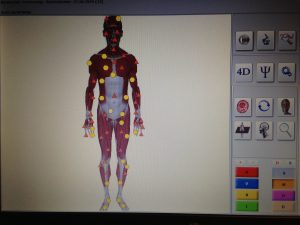 Fig. 6. Example of hardware 3D visualization of a muscles functional condition of a bicyclist with torsion of body organs. 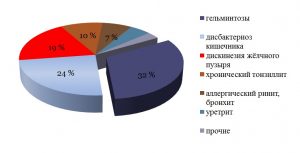 Actually, NLS-diagnostics method allows to “glance” into a prepathology condition of sportsmen and to reveal the latent reserves there. The main limiting factors of healthy bicyclists performance were functional abnormalities of biochemical processes: endogenous and exogenous intoxications, abnormalities of acid-alkali balance, albuminous, fatty and carbohydrate exchange, a deficiency or excess of certain substances. Excessive stress to reflectory weak muscles leads to formation of structural changes in them, and also in tendons, joints and bones. Fascial shortenings in antagonistic muscles are developed as a compensatory reaction to weakness of agonistic muscles. Emotional stress, specific character of riding a bicycle (restriction of upper limb girdle compensatory rotations, laboring belly breath, fixed foot) also violate a natural optimum pattern of a sportsman walking with formation of various compensatory sanogenic reactions.

Thus, nonlinear diagnostics, in any conditions and periods of competitive activity, allows to reveal limiting factors, to monitor dynamics of a functional condition of sportsmen in due time and objectify an individual approach to applied restorative actions.

1. Local differentiated treatment of problem muscles with massage, ischemic compression of trigger knots or postisometric stretching, myofascial release, stretching with percussion and others;

3. Restoration of optimum performance of muscle-fascial links by a method of motion pattern reduction and training with use of an unstable platform.

After application of restorative actions asymmetry of force exertion to pedals decreased considerably according to results of repeated cycle ergometry testing.

1. Professional racer V.Gusev always noted lesser strength in left lift-off leg at pedalling. True shortening of the left hip by 10 mm has been confirmed by x-ray. Testing of force exertion symmetry with a corresponding insert under a thorn of a left shoe did not eliminate difference of 15%. Nonlinear diagnostics of main reasons of left leg muscles inclusion abnormalities has revealed a dysfunction of temporomandibular joint. Testing with a special soft dental bar, that prevented compression of temporomandibular joint, has reduced pedalling asymmetry down to 2%. When we used it efficiency during mountain stages of races has raised.

2. Spanish racer J.Rodriguez has joined the team in 2010, standing 32nd in a world individual rating. His basic specialization is many-days races with steep, but short mountains. Long rises reduced his efficiency. In the middle of major tours we registered painfullness under a left knee and in a right coxofemoral joint. NLS-research identified the reasons of non-optimum pedalling pattern, which have been caused by functional change of a left ankle bone condition and instability of tibial and calf bone heads syndesmosis. After carrying out of restoration techniques the racer had a feeling of pedalling symmetry, his endurance has increased, which has helped him in 2010, 2012 and 2013 to take the higher place in world professional cycling.

Result of correction of the revealed limiting factors was the increase of strength, endurance and, as consequence, improvement of individual results of “Katusha” sportsmen in professional races, Russian and World Championships. “Katusha” pro-team has taken the 10th place in UCI world team rating in the first season of 2009. During last two seasons the team holds a place among three strongest teams. In an individual rating the leader of a team – J.Rodriguez has taken the 1st place in the world in 2013 3rd time. 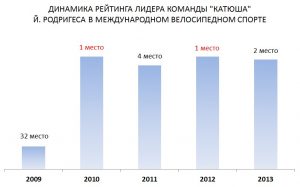 The main advantages of nonlinear diagnostics for a doctor in sports medicine are:
1. Quickness of a complex evaluation of a sportsman health condition.
2. Visualization of muscles tone disbalance.
3. Highly accurate objectification of pre-clinical conditions of organs and systems, the latent “emotional”, “chemical”, “structural” and “energy” limiting factors.
4. Possibility of identifying the true reasons of a pathological process and a muscular disbalance.
5. Operative control over dynamics of a functional condition of a sportsman and applied treatment in any conditions of training and competitive processes.
6. Documentary justification of treatment application to practically healthy sportsmen.
7. Preventive and prognostic targeting.

Integration of nonlinear diagnostics into sports medicine gives an opportunity to raise the knowledge and possibilities of team doctors of any sports in search of reserve potentials in sportsmen to a new level.