Radiology and NLS-diagnostics of lungs affections at malignant lymphomas

Lymphomas are primary tumors of lymphatic system which are divided into two basic groups: Hodgkin disease and non-Hodgkin malignant lymphomas. Lymphomas are related to tumors of immune system and grow, as a rule, from a tissue of lymph nodes.

Lymphomas comprise 1% to 4% among all revealed for the first time malignant tumors. Hodgkin disease is diagnosed in 25%–40% of cases of all malignant lymphomas.

For the last years increasing of lymphomas number in persons with immune insufficiency after organs transplantation and in patients with collagen diseases is noted. The quantity of AIDS-associated lymphomas and lymphomas in persons carrying Epstein-Barr virus has increased as well.

Secondary affection of lungs at lymphomas develops by hematogenic way or due to direct distribution from mediastinum or lungs lymph nodes on contact.

Often lungs are involved in the process at illness relapses.

For identification of Hodgkin lymphomas stage medics use the classification accepted during the congress in Ann Arbor in 1971. This classification reflects quantity of the involved organs and tissues, and also prevalence of process above and below a diaphragm.

According to Ann Arbor classification there are two forms of lungs affection: spreading from hilum to one lobe of a lung (designated by a letter E) and hematogenic spreading into lungs (stage IV).

In diagnostics of various malignant lymphomas medics apply both traditional radiological studies, which allow to reveal enlarged intrachest lymph nodes, changes of a pulmonary tissue and pleura, and modern highly technological and more informative methods of research, such as computer tomography (CТ) and computer nonlinear diagnostics (NLS) which allow to evaluate prevalence of a pathological process precisely. Data obtained from various researches gives the chance to diagnose, select the most effective treatment in due time that can promote increase of duration and quality of life.

The purpose of the present research is studying of lungs affections peculiarities, first of all by means of CТ and NLS, in patients suffering from Hodgkin lymphoma and non-Hodgkin lymphomas with drawing up of optimum algorithm of patients check-up.

72 patients (43 men and 29 women) with lungs affections due to malignant lymphomas were examined, in 41 of them Hodgkin disease and in 31 non-Hodgkin lymphomas were diagnosed. The age of patients was from 14 to 80 (on the average 56.8±1.6 years old).

In 21 patients lymphoid affection of lungs has been confirmed by histological research, in 51 by clinical research. In 14 patients to verify changes in lungs we carried out puncture biopsy of a pulmonary tissue under control of CТ or NLS with the subsequent cytologic and immunohistochemical researches of biopsy material. 3 patients were subjected to diagnostic thoracoscopy with biopsy, in 4 patients surgical operation is fulfilled.

All patients were subjected to x-radiography, CТ and NLS of thoracic organs.

Data of ray-diagnostics was studied together with results of NLS, and also clinical and laboratory researches.

CТ was carried out with spiral computer tomographs of III generation Hi Speed NX/I by General Electric and Aguillion by Toshiba.

Scanning with high-resolution algorithm with layer thickness of 1 mm and e2 filter imposing was applied to 36 patients in order to get a detailed evaluation of lung pattern condition.

NLS was carried out wirh device “Metatron”-4025 of IV generation, made by Institute of Practical psychophysics (Russia) with professional software “Metapathia GR Clinical”, allowing to receive three-dimensional image of lungs and section in any plane with all layers of thorax, vessels and lymph nodes.

NLS-graphy may be related to both methods of screening diagnostics, and to specifying diagnostics – with use of NLS-ultramicroscanning and spectral-entropic analysis (SEA) for resolution of questionable matters of lungs diagnostics. SEA allows to identify a morphological pertain of pulmonary tumoral formations by their spectral similarity to etalon processes, to evaluate metastatic affection of lymph nodes, to detect presence and character of genetic aberrations in tumoral subclones that will define, finally, amount of surgical intervention.

Processing of the received data included a visual estimation of patient’s “whole body” image and affection areas, and also SEA of morphological substrata in the affection nidi study results.

The main forms of pulmonary tissue affection, detected in patients with lymphomas, were: palpable abnormalities, fine-focal dissemination, infiltrative changes with a thickening of interlobular and intralobular interstitial tissue and peribronchiovascular thickenings, and also alveolar infiltration and pulmonary consolidation.

Nodular lesions of lungs in 55 patients with lymphomas were revealed after application of radiological method (RM) – x-radiography and CТ and in 58 – by NLS. Nodular lesions had multifocal character character in 77% of cases at RM and in 82.8 % at NLS-scanning, were bilaterial in 44.6 % at RM and in 52.7 % at NLS. Nodes in a pulmonary tissue were revealed equally often at patients Hodgkin lymphoma (85.3%) and non-Hodgkin lymphoma (74.2%). At the same time we did not note prevalence of revealed nodes on any side.

The size of revealed nodes in a pulmonary tissue was from 2 to 30 mm. In 83% of cases at x-radiography and CТ sizes of nodular lesions were less than 30 mm. Nodular lesions in lungs had rough contours.

Cavitary lesion were revealed in 4 cases, a symptom of air bronchography – in 8 cases.

In the majority of patients of lungs affections were combined with intrathoracic lymphadenopathy.

Affection of pulmonary tissue without accompanying lymphadenopathy was observed in 14 patients.

Involvement of pleura into the process was revealed by RM in 14 (18.6%) and by NLS in 16 (22.2%) of cases and in patients with lymphoma it was caused by obstruction of veins and lymphatic ducts, tumoral infiltration. Invasion of anterior chest wall was detected in 6 patients. 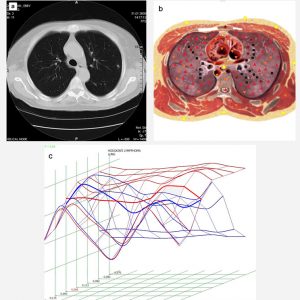 Nonspecific inflammatory changes in lungs were detected in 12 (16.6%) patients. In 9 (12.3%) patients we revealed mycotic pneumonia. When after NLS it was difficult to differentiate lymphous affection of lungs from inflammatory processes or a hypostasis of lungs, we applied SEA with the subsequent confirmation by transthoracic puncture biopsy under control of NLS. Research of biopsy material confirmed results of SEA in 99.3% of cases.

In 18 % of cases NLS detected changes in lungs at the normal data from radiological and CТ research methods, that has demanded correction of applied treatment. 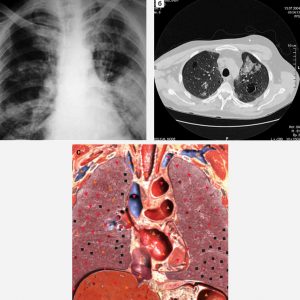 In 36 patients NLS revealed mediastinal lymphadenopathy which was not detected by x-ray and CТ.

In 43.7% of cases NLS has allowed to acquire additional information in comparison with RМ, in 25% of cases we revealed more nodes in a pulmonary tissue, in 15.8% nodes which were diagnosed by RM as unilateral, were identified a bilateral by NLS. 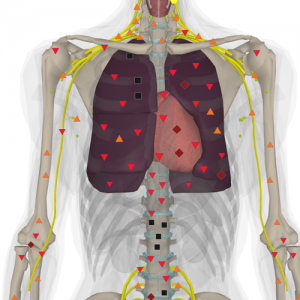 In case of doubtful results of radiographic method and CТ, 9 patients were administered to NLS-graphy with SEA, which in most cases allowed to specify character of pulmonary lesion of in patients with lymphomas.

Ultramicroscanning mode with SEA of lymph nodes and lungs allowed to reveal neoplastic character of changes on early stages.

Although at the moment the basic methods of pulmonary affections diagnostics at lymphomas are traditional radiological research and CТ, according to received data examination of new and repeatedly surveyed patients should be started with application of NLS-graphy. In the presence of pathological changes on roentgenograms and CТ, to carry out specifying diagnostics 3D NLS with SEA must be applied, because among the methods of visualisation applied in diagnostics of pulmonary affections at lymphomas the most universal is NLS-research (according to our data), which allows to define precisely not only location of a process, its spreading, but also to specify quantitative indicators of the given process. At doubtful results of RМ it is recommended to apply NLS-ultramicroscanning with SEA, which allows to reveal activity of process and to estimate its prevalence in lungs and lymph nodes.