Metastasing of various tumors in brain strongly worsens the course of a disease. However modern treatment methods such as stereotactic radiosurgery and chemotherapy potential development provide substantial life prolongation of such patients. That is why well-timed, qualitative and which is more important quick overall assessment of oncological disease spreading is the key requirement for choosing of treatment method.

Positron emission tomography (PET) with the use of radiopharmaceutical 18-Fluorodeoxyglucose has high specificity and sensitivity, which means this method is the main method in assessment of disease spreading in oncological patients at the moment. In case of suspicion for brain metastatic affection, positron tomography of the whole body allows to reveal the primary nidus and to estimate disease spreading in organism in general. But, despite its advantages, this method has some essential restrictions that do not allow its using as a screening research. First of all, this is highly technical character of the method, production of radiopharmaceutical, its transportation and utilization demand additional staff except for medical personnel, another important aspect is relatively high cost of research. Long time of scanning, restrictions related with accompanying diseases (diabetes) also narrow down potentialities of this method.

Attempts to apply computer tomography (CT) and MRT of the whole body in search of primary tumoral centre and spread of oncological process have shown that the greatest informativity of these methods was achieved in visualization of bone damages and “non-mobile” parenchymatous organs. The problem of differential diagnostics of lymph nodes hyperplasia with tumoral affection (this fact is the criterion for assessment of a stage of disease) it is still unsolved now. Aside from that computer tomography and MRT in standard sequences demand duplicated scanning with contrast strengthening which considerably increases research time.

Three-dimensional nonlinear scanning (NLS) was included into clinical practice during last years, and at the present day it is frequently used in many areas of medicine. Main advantages of new 3D-NLS method, in our opinion, are: short research time (about 30 minutes) both high sensitivity and specificity.

The use of this method provides great possibility to “see” tumoral structures against the background of non-affected tissues due to their various chromogeneity.

The objective of this research is to evaluate possibilities of 3D-NLS of the whole body in assessment of tumoral process spread in patients with metastatic affection of brain.

3D NLS-research was performed with the use of “Metatron”-4025 system, developed by IPP, Russia in partnership with Clinic Tech Inc, USA. The system is equipped with the digital trigger sensor, high-frequency generator (frequency 4,9 GHz) and continuous spiral scanning unit. Professional computer program «Metapathia GR Clinical» with possibility of three-dimensional visualisation, ultramicroscanning and spectral-entropic analysis is used together with the system.

PET-research was performed according to the standard scheme, after 6-hours starvation with water loading. 370 MBk of 18-Fluorodeoxyglucose was injected intravenously. After 60-minutes pause the scanning was performed, in the following 6 minutes – research of separate organs: brain and other tissues in 2D-image. Transaxial images were reconstructed with the use of Shepp-Logan-filter (frequency 0.35 cycles per pixel) and were processed using processing chart received at intermediate scanning. Transaxial images were aligned for each sagittal and coronary image. The quantitative assessment of accumulation standard level values was not performed.

Results and their discussion

Presence of pathological fixation zone of radiopharmaceutical on PET was the basic criterion of changes assessment, the correlation of received information on 3D-NLS was performed along with it. Intracranial changes were only estimated according to MRT.

In 2 peripheral lung cancer patients the primary tumor nidus both on PET and 3D NLS, confirmed by the results of spectral-entropic analysis was revealed. Small metastases (about 5 mm.) in lungs were also detected.

In 3 central lung cancer patients the received data of 3D-NLS with spectral-entropic analysis provided precise detection of space-occupying lesion. The following factor drew attention: detection accuracy of pathological foci at 3D NLS research, as a rule, exceeded the values received at PET procedure. Important advantage of 3D-NLS method is the absence of a signal from heart which may “conceal” tumoral formations at PET.

All patients with mammary gland cancer metastases in a brain, included in our research, were surgically treated because of primary tumor; radical mastectomy was performed during this process. In all cases the metastatic affection of brain was revealed for the first time, and in 2 cases – secondary affection of internal organs. Pic.1 shows the example of the patient with metastatic affection of a periapical zone of the right lung and the upper lobe of the left lung. Extensive affection area of the left lung at 3D-NLS draws the attention, which is possibly related with atelectasis formation.

After carrying out of NLS-research of a body we had an assumption of metastatic affection of vertebras, we additionally at once performed MRT-research in standard modes Т1 and Т2 for diagnosis confirmation. Pic.2 shows the example of MRT-research in DWI (diffusion weighted imaging) and Т2 modes on which the metastatic affection of L1 and L2 vertebras bodies were detected in stomach cancer patient. 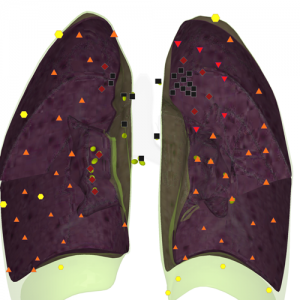 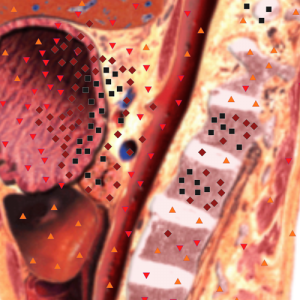 In 1 ovarian carcinoma patient 3D-NLS method was used 2 months after carried out PET-research. The patient was finishing her second course of chemotherapeutic treatment, and also underwent radio surgery course concerning multiple metastatic brain affection, however the patient pointed out the increase of pain phenomenon. Before chemotherapy at PET the large metastasis in the area of coxal cavity to the left was revealed, during control 3D-NLS research the chromogeneity of nidus (6 points according to Fleindler’s scale) with spread to the wing of ilium was detected. The received results were confirmed during CT-research. 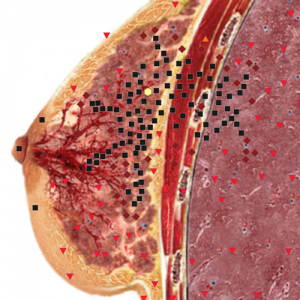 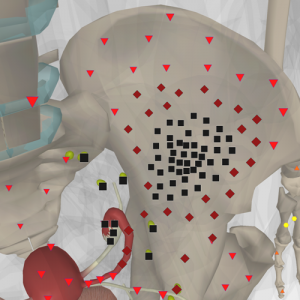 However used 3D-NLS methods at research of the whole body allowed revealing some features which must be considered for an adequate assessment of changes. In such a manner false-positive results were marked in 2 patients at NLS-images. Concentration of liquids in pleural cavity, and also ovarian cysts were wrongly interpreted.

NLS allows visualization of tissues with the initial, pre-nosological changes of tissue functioning. This fact exactly is the big advantage of this method, as well as during NLS: anatomic changes are not estimated but functional changes in tissues are analyzed.

1. Research of the whole body with the use of 3D NLS method allows detection of primary tumor source and also assessment of the spread of disease as a whole in patients with primary found brain metastatic lesion.

2. Comparative analysis of 3D-NLS and PET of the whole body demonstrated higher sensitivity of 3D-NLS method in assessment of oncological disease spread.

3. NLS-method gives the opportunity to monitor changes in due course and rapidly change treatment methods.

3D-NLS method of the whole body can be classified to the screening method taking into account the time spent and the cost price of research.