Chronic obstructive pulmonary disease (COPD) is the chronic slowly progressing disease characterized by irreversible or partially reversible (with application of bronchial spasmolytics or other treatments) obstruction of a bronchial tree. It is considered that COPD is a combination of an emphysema and affection of a bronchial tree and, as a rule, it is complicated by a pulmonary hypertensia, that is clinically manifested by respiratory insufficiency and signs of pulmonary heart.

According to American Thoracic Society the pulmonary emphysema (PE) is the anatomic alteration of lungs, characterized by pathological expansion of air spaces, located distal to terminal bronchiole and accompanied by destructive changes of alveolar walls. According to this definition, the obligatory symptom of PE is not only expansion, but also destruction of respiratory parts of lungs in the absence of the manifested signs of a pneumosclerosis. The emphysema is usually classified on the basis of changes in acinus and a secondary pulmonary segment.

Thus, COPD is a chronic inflammatory disease with primary affection of distal regions of respiratory ducts, parenchyma of a lung and formation of an emphysema which is characterized by development of initially partially reversible, and as a result – irreversible bronchial obstruction.

COPD is related to widespread diseases of a human. In the USA the tendency to increased incidence of COPD is marked: only for last period this indicator has increased by 25% in men and by 69% in women. The next years the further growth of disease is predicted. Epidemiological data related to disease incidence and death rate often underestimates importance and prevalence of COPD, as usually it is not diagnosed before clinically manifested and relatively severe stages of the disease develop. According to the American respiratory society, only 25% of disease cases are diagnosed in due time. In the USA COPD incidence grow near 15 million persons.

91 patients with clinical symptoms of COPD and control group of 24 patients with other diseases have been surveyed during 2008-2010.

The persons of both sexes and of different age categories (from 20 till 70, 58 years old on average) were studied.

In the majority of patients the main clinical symptoms were chronic cough, production of phlegm, a short wind at load. Duration of disease varied from 5 till 15 years.

In 13 patients disease symptoms were manifested gradually, in 69 clinical symptoms developed within last 5 years, and in 6 – in 15 years after beginning of the disease. However in certain cases (n = 3) we observed periods of quick progressing of illness after recovery from viral respiratory infection or prolonged pneumonia. In 45 patients disease symptoms began with the intense intoxication (weakness, sweatiness, lowgrade fever) and cough with phlegm that lasted from 2 weeks (n = 33) to 1 month (n = 24). The most typical and constant clinical sign was the short wind with decreasing of tolerance to physical stress which was marked in patients of advanced age (34%), and it was at rest in 2.7% of patients. In 30 patients with gradual development of disease the short wind was the earliest clinical symptom, aroused at considerable, and then at moderate physical activities.

The most typical clinical sign was phlegm discharge in the mornings (n = 42). In 12 patients in cases of more expressed aggravation phlegm discharged throughout the whole day, that has been due to physical stress and breath acceleration.

In 29 patients we detected asthenic bodybuild, apparent kyphosis, barrel-like shape of thorax. In 5 most severe patients we marked participation of auxiliary neck muscles in respiratory excursions. Decrease of body weight was typical in 37 patients. In 45 patients increased body temperature was marked.

Auscultation results had diagnostic value: harsh breathing detected over all surface of lungs, and dry disseminated low-pitched rale. In 52 patients we detected moist small bubbling rale at appearance of phlegm. At the same time bronchial spasmolytics did not have an essential effect. In 36 patients cough was absent or has been manifested slightly. In smoking patients (n = 16) progressing of a short wind and cough with mucopurulent phlegm was marked.

For evaluation of COPD course character, patients were examined with “Metatron”-4025 device (ClinicTech Inc., USA and the IPP, Omsk) with the high-frequency generator of 4,9 GHz frequency with the unit of the continuous spiral scanning, equipped with the computer program “Metapathia GR Clinical” with possibility of three-dimensional visualization of pulmonary tissues.

For the purpose of specifying diagnostics all patient were subjected to ray investigation. First of all, x-radiography of a thorax was carried out in two projections with SIREGRAPH CF x-ray device by Siemens.

In 10 patients we found out air achromogenic (1-2 points at the Fleindler’s scale) cavities of irregular shape with walls of unchanged hypochromogenic pulmonary tissue without visible walls. Air cavities had centrilobular location, changes were the most significant in superior lobes, especially in cacuminal and posterior segments. In 26 patients we registered areas of decreased chromogeneity, of roundish shape and the small sizes (2–3 mm), located also subpleuraly and paraseptaly. In 12 patients air cavities occupied almost the whole volume of secondary segments in supradiaphragmatic areas of lungs. In 7 patients we noted presence of large and huge subpleural blebs with hyperchromogenic walls (5-6 points at the Fleindler’s scale) and their combination with air cavities of other location.

According to a number of authors, these changes correspond to various variants of emphysema (intralobular, paraseptal, panlobular). In diagnostics of PE 3D computer NLS-diagnostics is most informative at early stages of disease.

In 17 patients NLS-graphy has detected signs of expiratory air trap in amounts from individual lobes to segments. In 7 patients the given symptom was combined with signs hypochromogeneity of pulmonary tissue at breath top. With the background of hypochromogenic zones we marked reduction of caliber of pulmonary artery’s corresponding branches. According to some authors, given symptoms indirectly evidence obliterating bronchiolitis, at which morphologists mark growth of granulations in lumen of distal bronchias and fibrosis of their walls up to almost full obliteration of lumen. As a result, at inhale the secondary lobe is filled with air, stretched, and at exhale is not fall down. The lobe restretching is not accompanied by destruction, resolution of its structures, as at emphysema.

In 5 patients of this group 3D computer NLS-diagnostics has revealed cylindrical and varicose bronchiectases of bronchial tubes of 4-8 rates, in 18 patients hyperchromogeneity (4-5 points at the Fleindler’s scale) of bronchial tubes walls and an illegibility of their contours are noted. Besides, according to 3D computer NLS-diagnostics data, inside secondary lobes occurrence of small hypochromogenic nidi against some strengthening of intralobular interstitial picture is noted in 11 patients. The given displays in the scientific literature are named as “a tree with the bulked up kidneys” or “toy little men” symptoms and they morphologically correspond to displays of infectious bronchiolitis of a various aetiology. Thus, in the given group of patients the combination of obliterating bronchiolitis with an infectious bronchitis and-or bronchiolitis is noted.

In 12 patients the combination of signs of emphysema and bronchiolitis is registered. 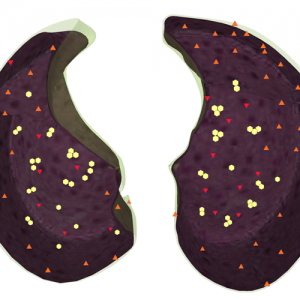 For revealing of the obstructive type short wind reasons at COPD, all patients have been divided into 3 groups in accordance with NLS-signs specified above, and within this groups a comparison of external breath function indicators is fulfilled.

Comparison of the x-radiography data and 3D computer NLS-diagnostics has shown that superfluous airiness of a pulmonary tissue is usually wrongly treated in favour of emphysema. At the same time emphysema of lesser and average intensity usually is not detected on roentgenograms. Amounts of false-positive and false-negative emphysema diagnoses according to x-radiography data exceed 57% and 34% accordingly. 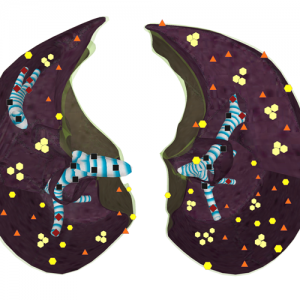 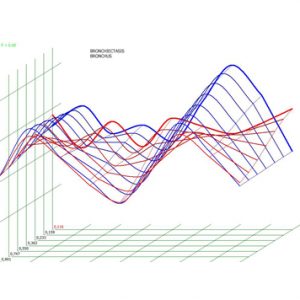 1. Along with COPD at least 2 parallel pathological processes (emphysema and obliterating bronchiolitis) develop, having different symptoms at 3D to computer NLS-diagnostics.

3. Clinical displays of a short wind at COPD are caused by intensity of obliterating bronchiolitis, instead of emphysemas.

4. 3D computer NLS-diagnostics should become a method of choice in ray diagnostics of COPD.