Colon cancer holds 2nd – 3rd place in the structure of oncological diseases in Republic of Korea and 2nd place in structure of the world’s mortality rate from oncological diseases. Only in 2009 there were 15379 cases of colorectal cancer and 5218 deaths due to this pathology registered. Risk of cancer development grows with age in both men and women. In should be noted that 75% of carcinomas develop in patients belonging to average risk group, who have no predisposing causes. Starting from the 80’s of the last century a certain decreasing of mortality rate from colorectal cancer was registered and starting from the 90’s a situation with disease incidence settled. Five year survival rate increased approximately by 12% in the last 15-20 years. It is somewhat related to well-timed detection and elimination of polyps. Only 39% of carcinomas are registered at the stage when a tumor is located within the limits of intestinal wall, and about 20% of patients already have separate metastases at the moment of colon tumor diagnosing for the first time.

Development of colorectal cancer may be prevented by well-timed detection and elimination of polyps.

Choosing of examination methods for colorectal cancer screening depends not only on reliability and accuracy of results, but patient’s trust to selected method, their inclination to undergo the examination also.

The objective of the present study is to evaluate possibilities of virtual NLS-graphy in revealing of neoplasms in colon and introduction of this method as a possibility for colorectal cancer screening.

Altogether 548 patients aged from 32 to 78 were examined. Among them: 295 (53.8%) men and 253 (46.2%) women. After fulfillment of NLS, 488 (89%) patients (in accordance with indications and their will) were administered to endoscopic colonoscopy. After examination, colonic surgical intervention was carried out in 28 patients. All ethics aspects were observed.

Indications for NLS were complaints about disorders of normal colon functioning, positive oncomarkers test, presence of occult blood in feces.

NLS-graphy of colon was carried out with “Metatron-4025” system (IPP, Russia), equipped with continuous spiral scanning unit with generator frequency of 4.9 GHz and digital trigger sensor. The system was fitted with professional computer software “Metapathia GR Clinical” with a feature of three-dimensional visualization of colonic wall, NLS-ultramicroscanning mode with spectral-entropic analysis (SEA) of tissues in an examined area.

Interpretation of acquired axial crosscuts after all examinations was accompanied by application of the following programs: two-dimensional NLS, three-dimensional intracavitary reconstruction (virtual dissection) and DeepVision (allows to visualize internal and deep structures of a body, normally hidden by other anatomical structures) and FastVision (allows to zoom in and study separate anatomical structures in every detail) modes. A part of the study was carried out using program of continuous spiral scanning and automatic search of an area with a suspicion of a tumor presence. Analysis of acquired images, their interpretation with use of above mentioned computer programs were carried out by one therapist.

Revealed during examination neoplasms were registered in interpretation reports with mentioning of their location, size, structure, shape and chromogeneity. Identification of morphological structure of a neoplasm was carried out with use of NLS-ultramocroscanning mode with spectral-entropic analysis, which allowed to check character of a neoplasm by comparing of its spectral similarity to etalon process. Results were compared with findings of endoscopic colonoscopy and histological study protocols of removed neoplasms, suspected of being tumorous. Results of spectral-entropic analysis were confirmed by histological studies in 89.7% of cases.

Altogether 788 space-occupying growths were detected in 402 (73.4%) of 548 examined patients. In 21 (2.7%) cases colorectal cancer was diagnosed, the remaining 767 growths were verified as polyps (see Table 1). In 74 cases they were identified as flat polyps (its root is twice larger than its height) with visualization in a shape of half-oval hyperchromogenic node in a colonic wall (5 points at Fleindler’s scale). The best visualization was in NLS-ultramocroscanning mode. Minimal diameter of a revealed by NLS growth was 2 mm. To increase a sensitivity in revealing of small polyps we had to compare image of a colon in NLS-ultramocroscanning mode with spectral-entropic analysis. Multiple polyps were revealed in 6 (1.5%) of 402 patients. Polyps were properly visualized both on axial crosscuts and in NLS-ultramocroscanning mode with spectral-entropic analysis as a hypechromogenic structure (5-6 points at Fleindler’s scale) at edges and isochromogenic (2-4 points) in a center of a polyp. Application of endoscopic colonoscopy confirmed in all patients presence of polypous growths, detected by spectral-entropic analysis, size of which was above 8 mm. Morphologically verified by spectral-entropic analysis polyps were of various histological structure; results of polyps histological study are represented in the Table 1.

Colorectal cancer detected in 21 (3.8%) of 548 examined patients had various character of growing and localization. Exophytic growth of a tumor was detected by spectral-entropic analysis in 6 (29%) of 21 patients. Cancerous growth of lesser size (18 mm in diameter) in one patient looked exactly the same as flat polyp and was verified by application of spectral-entropic analysis. We managed to identify its morphological character after histological research only. Larger tumors, sized from 20 to 50 mm (in 5 patients) looked like asymmetrical focal growths with hyperchromogenic wall (6 points at Fleindler’s scale) and achromogenic center (1 point at Fleindler’s scale). In 15 (71%) of 21 patients carcinoma had circular type of growth. At such type of growth we detected thickening of a wall in an area of a tumor, its rigidity (rigidity was identified as a flattening of a wall and absence of haustration in this area), application of spectral-entropic analysis allowed to make more reliable judgment about carcinoma. Spectral-entropic analysis of a colonic wall, confirmed by histological study of cancerous growths, revealed adenocarcinoma in 20 cases and tubular cell carcinoma in one case.

It was noted that large nodes were localized more often in blind intestine and ascending colon, when average-sized nodes (20-30 mm in diameter) were distributed in a colon evenly. Distribution of malignant neoplasms of colon regarding their location is shown in the Table 2. 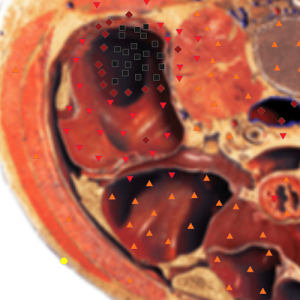 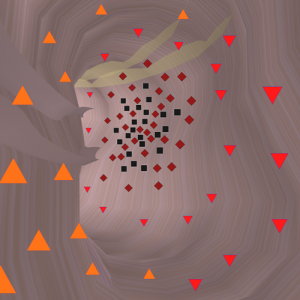 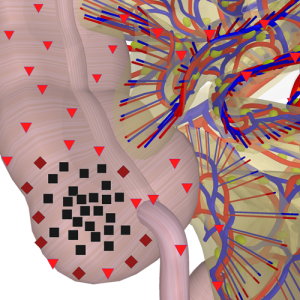 Pic. 3.Multidimensional NLS-scopy of a patient, 52 years old. NLS-gram of coronary cavity through blind intestine with visualization of a tumor. 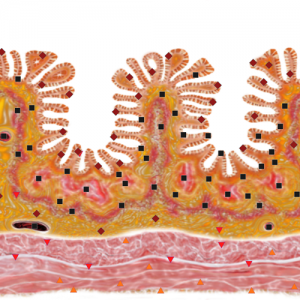 Apart from evaluation of character of tumorous growth, NLS-ultramocroscanning with spectral-entropic analysis allowed to detect enlarged mesenteric lymph nodes in 8 patients, and to reveal hepatic metastases in 3 patients. Study of colonic wall, paraintestinal tissues and parenchymatous organs can be done using NLS-graphy. These changes are visualized on axial crosscuts and reconstructed multidimensional and multiplanar images. Evaluation of colonic wall condition, paraintestinal changes, and changes in parenchymatous organs of abdomen allow to identify a stage of an oncological process.

Table 2. Location of malignant tumors in a colon (n=21), revealed by NLS-ultramocroscanning with spectral-entropic analysis.

NLS-graphy has revealed 89 (11.3%) of 788 neoplasms in areas of a colon, which were inaccessible for endoscopic colonoscopy (dolichosigmoid, dolichocolon, evident spasm, postsurgical stenosis, etc.).

In 2 (0.3%) of these patients spectral-entropic analysis and following histological study have revealed colon cancer. 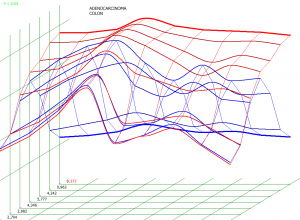 In total sensitivity of NLS-graphy in revealing of space-occupying masses was 98%, its specificity – 89%.

The study has shown high rate of sensitivity of NLS-graphy in revealing of various colonic pathologies, in particular in revealing of space-occupying masses – 98%. NLS-graphy is much more comfortable for a patient than endoscopic colonoscopy and irrigoscopy. NLS also has a high-throughput and has no radiation exposure, in comparison to irrigoscopy. A distinctive feature of NLS-graphy is a possibility to study a condition of colonic wall and length of its affection, evaluate of paraintestinal changes, condition of lymph apparatus, mesenterium and parallel parenchymatous organ of abdomen. This method is recommended at incomplete or contraindicated colonoscopy or study of prestenotic parts of intestine. In modern oncology, an issue of revealing and treatment of benign pre-cancer neoplasms, which can have no symptoms for years and quite widely spread, comes to the fore. This issue can be solved successfully by NLS screening.

Therefore introduction of screening NLS-graphy along with endoscopic colonoscopy and tests for occult blood in countries with high index of colorectal cancer, such as Republic of Korea, is one of the solutions for decreasing of death rate due to this pathology.