Visualization of urethra was carried out mainly by means of endoscopic and roentgenologic methods of study for many decades. However all of them are more or less invasive and not always allow to get information about condition of tissues surrounding urethra. Besides, these studies are different in required time and in applied procedure, which creates certain difficulties for comparison of acquired results.

Over the last years the following methods are used to study urethra – ultrasound cystourethroscopy, echourodynamic examination, Doppler sonography and three-dimensional ultrasound visualization of urethra. However zonal limitations of acquired information (prostatic and membranous regions of urethra), one-dimensionality of one methods and insufficient resolution of another methods restrain their wide application.

At the same time the last decade is characterized by explosive development of medical equipment. Non-linear diagnostics (NLS) is one of the most shining examples of practical implementation of scientific progress achievements into diagnostics of a wide range of illnesses. Introduction of three-dimensional NLS-graphy (3D NLS) allowed to overcome a number of shortages and limitations of NLS and gave an incentive to further development of the method. Development of new algorithms of organs reconstruction promoted extending of 3D NLS-graphy’s application field. A possibility of reconstruction of images with overlay crosscuts and rendering of high-quality three-dimensional models without invasion and breaching of organ’s functions has become the optimal tool in solving of many diagnostic goals. The main features of 3D NLS-graphy are its objectivity, high resolution capacity, a possibility to get a three-dimensional image of an organ, and, of course, its non-invasive character. Besides, 3D NLS-graphy allows to study not an organ or its segment only, but surrounding tissues as well.

Analysis of NLS application results in Europe and America has shown that using of this method in urinology is limited, as a rule, by study of kidneys, urinary bladder and prostate. In available scientific references we have not found any studies of 3D NLS-graphy application in diagnostics of urethra diseases.

In 2010-2011 in urology department of Curie Institute’s clinic a new diagnostic method of urethra visualization was applied. 3D NLS-graphy of urethra was administered to 19 patients from January 2010 to February 2011. Studies were carried out with use of Metatron-4025 system (IPP, Russia).

Patients’ age varied from 21 to 61. Range of diseases at which the method was applied is the following:

Method of 3D NLS-graphy of urethra. NLS-scanning program was arranged in such manner when studied area corresponded to a space from vesicourethral segment till external urethral opening. The study program lasted less than 30 minutes.

After the study, analysis of acquired data was carried out in step-by-step mode, i.e. analysis of two-dimensional computed NLS-images. Further on 3D NLS-reconstruction of urethra (rendering of three-dimensional model) in various projections was carried out. When was necessary, we applied NLS-ultramicroscanning with spectral-entropic analysis (SEA), that allowed to gain an impression of genesis and character of a neoplasm without a biopsy. We believe that this non-invasive method is a quite valuable research instrument and in some cases it may significantly update or replace endoscopic study.

NLS-study was administered to18 patients. All studies was completed with 3D-reconstruction of an image, in 14 cases 3D NLS-ultramicroscanning with spectral-entropic analysis was applied. Analysis of acquired results (step-by-step crosscuts, three-dimensional images and ultramicroscanning with spectral-entropic analysis) allowed to ascertain a diagnosis, localize a pathological process, evaluate size of pathological nidus and urethra affection character and check condition of surrounding tissues in all patients.

Information value of the study is demonstrated by the fact that in 3 of 10 patients, suffering from urethra affection, common urethrography and urethroscopy did not identify character of affection in urethral striction region due to intense cicatrical process. Application of three-dimensional reconstruction of urethra and analysis of images in various projections allowed to specify peculiarities of pathological process in an area of pathological nidus in all patients. Initially cystography detected hyperplasia of prostate gland intermediate lobe in one patient. Analysis of step-by-step crosscuts and ultramicroscanning with spectral-entropic analysis has revealed a hyperchomogenic nidus in an intermediate lobe of prostate gland, SEA allowed to detect a tumor. Following optical urethrocystoscopy confirmed our findings: in the area of urinary bladder neck a growth of 8×6 mm diameter was detected.

In those cases when benign hyperplasia of prostate gland was the reason of infravesical obstruction, 3D NLS-graphy allowed to reveal affection of urethra in its post prostatic region and identify the reason of urination disorder. In a patient with urethral stricture, which developed in 10 years after transvesical adenomectomy, 3D NLS-graphy revealed, besides stenosis of urethra, a hyperchromogenic node of prostate hyperplasia (6 points at Fleindler’s scale). SEA gas shown high spectral similarity to “benign prostatic hyperplasia” etalon process (D=0,127).

Therefore at the present moment three-dimensional NLS-graphy of urethra is a valuable non-invasive diagnostic method that allows gathering detailed information about pathology of an urethra. It should be emphasized that acquired information may reflect a condition of urethra with regard of dynamics of applied therapy.

Our experience allows to mention the following advantages of 3D NLS-graphy: 1) it is possible to get multidimensional image of urethra, which significantly increases space perception of the organ; 2) acquired data is characterized by high degree of accuracy and objectiveness; 3) evaluation of surrounding tissues and their involvement into pathological process is also carried out; 4) the method is non-invasive; 5) there is a possibility of retrospective reconstruction of crosscuts with varying pitch; 6) radiation exposure and risk of urinary ducts infection development is decreased; 7) study of urethra is carried out taking into account dynamics of treatment; 8) low labor intensity of a research and decreased time of a patient stay in a hospital; 9) a possibility to carry out non-invasive morphological research of volumetric growths’ structure.

Another advantage of the method is its low cost in comparison to CT and MRI. 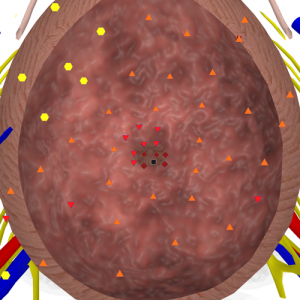 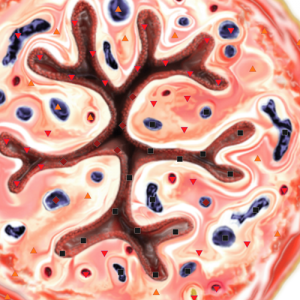 Pic. 4. NLS-ultramicroscanning of urinary duct. Transverse crosscut in area of membranous part. We see affection of mucous tunic and pathological changes of veins.

From year to year a range of diagnostic techniques increases, new methods are introduced and old ones are improved. Diagnostics becomes early and more accurate. Application of a new diagnostics method, such as three-dimensional NLS-graphy, allows to specify peculiarities of clinical course of many diseases affecting urethra, it extends our knowledge about a disease, therefore promoting successful treatment.

Undoubtedly, 3D NLS-graphy is not an alternative for other methods of urethra study, which are applied now. However application of some of them is not always possible or acquired information is insufficient. In such situations offered method can answer many questions.