Initial malignant tumors of bones are extremely rare. In the structure of malignant lesions they hold approximately 0.2%. However consequences of such lesions are severe, often resulting in a negative prognosis regarding patients’ life. According to WHO in economically developed countries up to 5000 new cases of malignant tumors of locomotor apparatus are registered and about 790 people die every year.

In this case only several primary tumors, such as osteogenic sarcoma (35%), chondrosarcoma (30%) and Ewing’s sarcoma (16%) are the most frequent and determine appearance of clinical symptomatology. At the same time it is well known that osteogenic sarcoma and Ewing’s sarcoma develop mainly in children and young people, but chondrosarcoma is diagnosed in adult and elder patients. Senior age groups are also characterized by metastatic lesions of bones.

As a rule, malignant neoplasms of locomotor apparatus give different and non-specific clinical symptomatology. In the majority of cases an assumption of malignant lesion of bones appears when, besides clinical manifestations (pain, swelling), roentgenogram also shows pathological changes. It can be various variants of osseous destruction, periosteal reaction, pathologic fractures, changes of soft tissues. At the same time roentgenologic semiotics gas several similar signs at various pathological processes. In particular, a single nidus of osseous lytic destruction, revealed by a roentgenogram, can be a consequence of both chondrosarcoma and metastasis. However due to physical peculiarities of development, traditional roentgenology method cannot differ these two processes. X-ray computed tomography has more possibilities in differing of chondrosarcoma and non-vertebral metastasis. CT may help in defining of osseous destruction length, in evaluation of soft-tissue component structure. Nevertheless if a process is located in long bones, at presence of lytic destruction of soft-tissue component, specificity of this method also decreases. New method of computed three-dimensional NLS-graphy, as we believe, also can be used to detect chondrosarcoma and metastasis. In available references we have not found information about application of NLS-method for differential diagnostics of chondrosarcoma and metastatic lesions.

The objective of our study is to research possibilities of NLS in differentiation of chondrosarcoma and non-vertebral metastasis in adult and elder patients.

To achieve our goal we studied NLS data of 8 patients with chondrosarcoma and 5 patients with metastases. Patients were of almost the same age and had similar localization of a pathological process. Technical parameters of NLS-researches were also identical.

Chondrosarcoma group consisted of 8 patients (4 men and 4 women) with primary and secondary neoplasms, aged from 36 to 68. In three patients a tumor was located in pelvic bones, in 3 – in a femoral bone and in another 2 patients – in an area of upper third of a shin bone.

Roentgenological study of these patients revealed the following: induration of osseous structure; intraosseous nidi of lytic destruction; thinning and sapping of a cortical layer; eccentric disturbance of a cortical layer in form of deformation due to pressing; pathologic fracture; ectostcal soft-tissue component.

In the group of patients with metastases there were 5 met aged from 54 to 72. A source of metastases in 3 of them was lung cancer, in another one – retroperitoneum cancer (mesenchymoma). Localization of a primary tumor in another one patient was not identified.

Metastases were located in 2 patients – in pelvic bones, in another 2 – in a femoral bone, and in the last on – in a shin bone. Roentgenological study of these patients revealed various variant of osseous lytic destruction. The diagnoses were histologically verified in both groups of patients.

All patients were subjected to combined NLS-graphic research. NLS was carried out with Metatron-4025 system (IPP, Russia), with digital trigger sensor, with a generator of 4.9 GHz frequency and a feature of three-dimensional visualization. During NLS-research we evaluated and compared a shape and a size of tumorous nodes, their contours and chromogeneity of neoplasms. Using ultramicroscanning with spectral-entropic analysis we evaluated a morphological structure of tumorous nodes by spectral similarity with etalon processes, and condition of surrounding tissues.

In the group of patients with chondrosarcoma maximum size of revealed meoplasms ranged from 4 to 15 cm (11.4 cm on the average).

In three (37.5%) studied patients a node was two-component, hypechromogenic (6 points at the Fleindler’s scale), it consisted of intraosseous and ectostcal parts, was of sand-glass shape. In another three (37.5%) patients with chondrosarcoma located in pelvic bones, tumors were of multinodular form. In 2 (25%) patients shape of a tumor was roundish. Contours of neoplasms were uneven in 5 (62.5%) patients, even – in 3 (37.5%) patients. In all cases hyperchromogenic neoplasms had distinct contours.

In 2 (25%) patients we registered a perifocal edema, which was shown as a moderately chromogenic structure (3-4 points), in 3 (37.5%) patients – neurovascular plexus was involved into the process.

In the group of patients with chondrosarcoma NLS-ultramicroscanning with SEA was administered to 6 patients. In this group we diagnosed typical septal and lobular signs in researched patients. 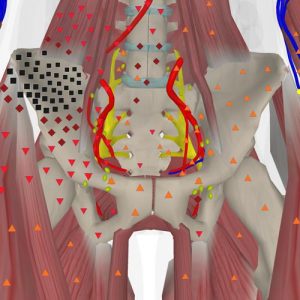 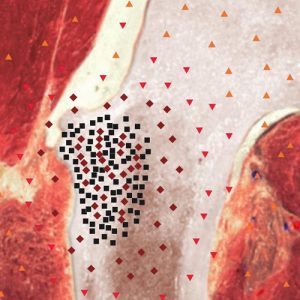 Pic. 2. Patient Ch., 69 years old. NLS-scanning. Secondary chondrosarcoma of an upper third of a right shin bone. Nidus of a tumor is heterochromogenic, a tumor has septal structure.

In 3 (37.5%0 patients with localization of the process in proximal parts of a thigh NLS-tomogram showed dense isochromogenic structure. At the same time we detected achromogenic areas in a structure of nodes, which we regarded as manifestations of tumorous necrosis. In 2 (25%) patients with localization of a node in the upper third of a shin bone, NLS-ultramicroscanning showed large cell structure of chondrosarcoma. NLS-ultramicroscanning with SEA was administered to a patient with primary chondrosarcoma of a left cotyloid cavity. At that honeycomb structure of a tumor and small soft-tissue hypochromogenic component were revealed. Application of NLS-ultramicroscanning allowed to evaluate a length of a tumor more precisely and reveal typical for this type of neoplasms septal and lobular signs.

In the group of patients with metastases, when a pathological process was located in long bones, maximum size of neoplasms ranged from 2 to 5 cm. In one patient a node was located inside a bone, in 2 patients a node destroyed a cortical bone and had small ectostcal component. In 2 patients with localization of a process in pelvic bones maximum size of metastases varied from 5 to 8 cm. In both observations a metastatic node was located in a haunch bone both inside and outside of the bone. On the average size of neoplasms was 4.3 cm.

Shape of metastases in all patients was close to roundish, had hyperchromogenic structure, indistinct and uneven contours. At peripheral areas of nodes we registered an area of perifocal edema 94 points at the Fleindler’s scale).

According to SEA results in one patient we detected a necrosis of metastatic node, in 1 – periosteal coverage reaction in a form of spiculated periosteal reaction, in 1 – we found involvement of neurovascular plexus into the process.

NLS-ultramicroscanning with SEA was fulfilled in 2 cases. In both observations it was lung cancer metastases, in the first case located in a wing of ilium, in the second – a shin bone. With ultramicroscanning we were able to define contours of a node and necrosis area more distinctly, to see spiculated periosteal reaction more clearly. 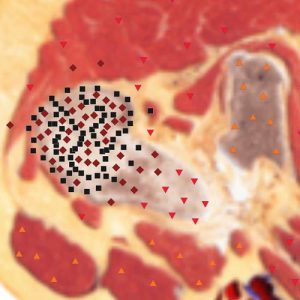 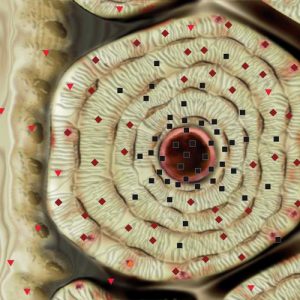 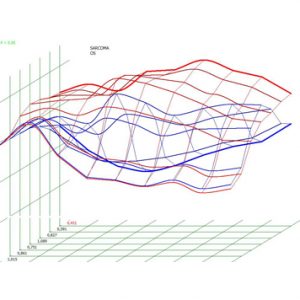 NLS is a reliable method of chondrosarcoma and bone non-vertebral metastasis diagnostics in patients of adult and elder age.