In order to study possibilities of combined NLS-study in diagnostics of the orbital cellulitis we analyzed results of examination of 60 people (120 orbits): 25 healthy people and 35 patients suffering from the orbital cellulitis. All patients were subjected to a standard ophthalmologic examination and combined NLS-study of an orbit and an eye, including three-dimensional ultramicroscanning and spectral-entropic analysis of tissues structure. Combined NLS-study allowed to reveal typical for the orbital cellulitis NLS-graphic signs, such as dilation of retrobulbar space and increasing of its chromogeneity. Using combined NLS-study we specified localization of a pathological process in an orbit, evaluated involvement of eyeball, orbit muscles and optic nerve into inflammatory process, which ensured choosing of proper treatment tactics. Repeated NLS-graphic studies allowed to evaluate efficiency of treatment.

Orbital cellulitis is a diffuse progressing acute inflammatory process accompanied by infiltration and purulent melting of orbit tissue. The disease may develop in any age, but more frequently children of 4-5 years old and young people of working age suffer from it. In children orbital cellulitis is preceded by acute respiratory disease, in adults – trauma, chronic and acute inflammation of pneumatic space, mouth cavity, sepsis.

Development of acute inflammations of orbit and their complications is provided by anatomic and topographic peculiarities of an orbit, such as neighbouring cranial cavity and sinuses, connection of arteries with systems of external and internal carotid artery arteries, absence of valves in orbit veins. Orbital cellulitis may cause intracranial complications and endangers not only an eye, but patient’s life also. All these factors set certain requirements for a modern diagnostics in order to choose adequate treatment. Efficiency of treatment depends on adequate evaluation of a pathological process, specifying its localization, detecting of necrotic decay presence. Solving of this question is impossible without application of modern visualizing diagnostic methods. Along with traditional methods of investigation (analysis of anamnestic data, order of clinical symptoms appearance, laboratory and functional tests), ultrasound, computed tomography and recently appeared NLS-diagnostics method allow to set a diagnosis on an early stage, which ensures choosing of proper treatment.

In recent years many new technologies were developed and then introduced into practical ophthalmology. NLS-study is becoming a leader of screening diagnostics among various methods of visualization thanks to a number of aspects (simplicity, availability, informativity, safety, absence of ionizing radiation and affordability). It was found that NLS-picture of orbital cellulitis at ultramicroscanning is characterized by asymmetry and dilation of retrobulbar space, changing of its structure and chromogeneity. However many important aspects of this issue are still unsolved: possibilities of three-dimensional NLS-study, ultramicrocscanning in combination with spectral-entropic analysis (SEA) of an orbit in diagnostics of the disease are not researched; information about application of combined NLS-graphy in evaluation of orbital cellulitis clinical course and treatment efficiency is missing. Thus study of this problem must be considered essential.

The objective of the study is to evaluate diagnostic possibilities of combined NLS-graphic study, including three-dimensional NLS-graphy, ultramicroscanning and spectral-entropic analysis of tissues structures, in examination of patients suffering from orbital cellulitis.

Material and methods of the study

All patients were subjected to a standard ophthalmologic inspection, which included external examination, analysis of an eye position in an orbit, condition of eyelids, conjunctiva, ocular motility, eyelids closing, eyeball reposition, detection of diplopy presence, visiometry, perimetry, biomicroscopy, ophthalmoscopy, exophthalmometry according to Hertel.

Patients with orbital cellulitis were subjected to plan radiography of pneumatic space. Patients were checked-up by E.N.T. specialist and stomatologist or maxillofacial surgeon.

NLS-study was carried out using “Metatron”-4025 system with professional software “Metapathia GR Clinical” (manufactured by the IPP, Russia and Clinic Tech Inc., USA), equipped with non-linear sensor with operating frequency of 4.9 GHz. During the study we evaluated chromogeneity of orbit tissues, length of retrobulbar space, condition of optic nerve and extraocular muscles of an orbit.

Three-dimensional NLS-graphy, thanks to application of 4D Tissue and DeepVision functions, allowed to study content of an orbit layer by layer, specify localization of a pathological process. We visualized cross-cuts of extraocular muscles and optic nerve in various projections, it allowed to define their relation with orbital structures and pathological changes that appeared as a result of orbit inflammation.

Statistical processing of acquired data was carried out by standard methods. NLS-graphic parameters of healthy orbit of patients with orbital cellulitis were included into a group of healthy ones. A difference considered to be reliable at p≤ 0.05.

Results of the study and discussion

The reason of orbital cellulitis development in 5 patients was a trauma, 2 of them – with penetration of a foreign body to an orbit, another 2 patients – combined with craniocerebral injury and in one case – with eye damage. In 26 patients orbital cellulitis has developed as rhinosinusogenic complication against the background of acute polysinusitis or aggravation of chronic polysinusitis. In 2 patients orbital cellulitis was a result of chronic periodontitis. In one patient we registered a complication after dacryocystorhinostomy administered due to chronic purulent dacryocystitis. Hematogenic introduction of infection into an orbit was registered in one patient suffering from acute bronchopneumonia.

NLS-graphic changes of an orbit’s content were visualized in all patients with orbital cellulitis. 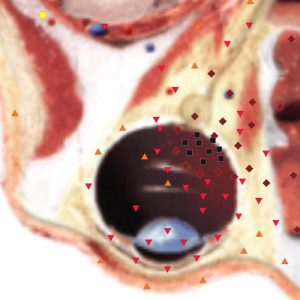 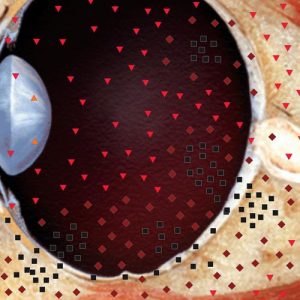 We detected increasing of an orbit’s tissues chromogeneity of various extent, which reflected intensity of inflammatory changes. Informativity of this symptom increased when we carried out three-dimensional NLS-graphy of inflammation area; it allowed to specify the localization of orbital cellulitis. It was important for detecting of a reason that caused orbital cellulitis and thus for choosing of the proper treatment. But in case of severe orbital cellulitis we detected diffuse increasing of retrobulbar space tissues chromogeneity, which prevented us from defining a quadrant of an orbit with the most severe pathological changes.

In case of abscessation in retrobulbar space, cavities with uneven edges and hypechromogenic content (6 points at Fleindler’s scale) were visualized. Application of three-dimensional NLS-graphy with ultramicroscanning mode allowed to specify the extent of tissues affection. Using virtual projection function we were able to select the most interesting cross-cut and thus to locate pathological process with high precision.

When a cavity was detected we carried out lancing of abscess. NLS-study allowed to specify localization and volume of pathological neoplasm, which conditioned amount and tactics of surgical intervention. During post-operative period repeated NLS-graphic studies helped to evaluate the efficiency of the treatment.

Latest models NLS-diagnostic systems (“Metatron”-4025) can visualize in 3D mode an orbit up to its top, which we regarded as unquestionable advantage of such systems. 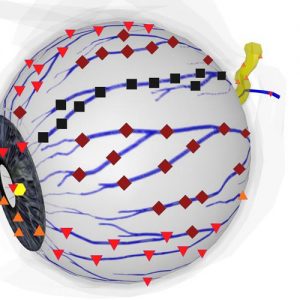 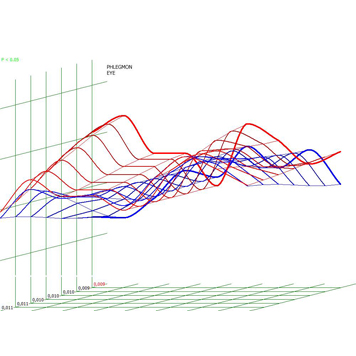 NLS-study allowed to reveal pathological changes of eyeball in 5 examined patients. In one patient with combined trauma of orbit, penetrating corneoscleral wound, rupture of internal part of an upper eyelid of a right eye, open fracture of frontal sinus anterior wall, symptoms of endophthalmitis were found. In remaining 4 patients thickening of eyeball membranes was visualized.

Studies in ultramicroscanning mode detected presence of hyperchromogenic stripes in retrobulbar space in two patients. Application of SEA specified that it was dilated stagnant veins of an orbit. Detected NLS-graphic changes together with clinical and laboratory data allowed to diagnose a complication – thrombophlebitis of an orbit that required changing of treatment tactics.

As shown result prove, combined NLS-study of patients suffering from orbital cellulitis allow to set a diagnosis; define rate of orbit’s circulatory dynamics violation and involvement of eyeball, orbit muscles and optic into inflammatory process; specify a localization of pathological process in an orbit and choose the proper treatment tactics. Using of combined NLS-graphy also allows to evaluate efficiency of chosen treatment of patients with orbital cellulitis.