Possibilities of modern NLS-technologies in specifying diagnostics of endometrium cancer

Rampant development of computer technologies of recent years and their active introduction into methods of medical visualization resulted in appearance of new methods, offering a possibility to acquire three-dimensional image of a researched object. The mentioned trend, first of all, applies to non-linear (NLS) computed diagnostics. Application of modern three-dimensional modes in NLS-graphy, such as multiplanar reconstruction, detailed reconstruction of an object (Fast Vision), transparency control (Deep Vision), pseudo-roentgen mode and using of special programs for automatic reconstruction of variously shaped objects (4D Tissue) provided a possibility to create highly informative virtual multidimensional images of various organs. Using of three-dimensional NLS-graphy for evaluation of uterine cavity condition and for study of pathological processes in endometrium, according to a number of authors, is more informative than ultrasound research and CT.

Material and methods of the study

In order to study possibilities of modern NLS-methods in specifying diagnostics of endometrium cancer (EC) authors carried out NLS-study of 64 patients with morphologically verified EC; average age of patients was 61.2.

Structure of various stages of endometrium cancer in patients is shown in Table 1.

Morphological forms and their frequency in EC patients is shown in Table 2.

NLS-research was carried out with Metatron-4025 system (IPP, Russia). NLS-research was fulfilled by high-frequency trigger sensors capable of multidimensional data gathering in an automatic mode, with 4.9 GHz frequency.

To study structural peculiarities of uterus and endometrium we used standard two-dimensional mode and method of three-dimensional NLS-graphy with various variants of image reconstruction.

Time of multidimensional data gathering depended on scanning speed and was in the range of 2 – 5 seconds.

Study of vascular and haemodynamic peculiarities of regional blood flow at endometrium cancer was fulfilled with three-dimensional NLS-angiography mode, which helped to get a multidimensional image of tumorous blood flow angioarchitecture.

Results of the study and discussion

In our NLS-research to study morphological peculiarities of tumorous lesion at EC we used method of three-dimensional NLS-graphy with spectral-entropic analysis (SEA). At the same time, in image superficial reconstruction mode, rendering of uterus frontal crosscuts was fulfilled, which was impossible when traditional two-dimensional NLS-graphy was applied.

At T1a stage in 100% of cases uterine cavity was visualized with distinct and smooth contours. In 58.8% of cases a content of uterine cavity had homogeneous moderately chromogenic structure, in a projection of one of uterine angles we detected a tumorous lesion in a form of roundish inclusion with sufficiently distinct and smooth contours, of increased chromogeneity (5-6 points at Fleindler’s scale).

At T1b stage in 71.4% of cases we registered lesion of one of uterine walls, at the same time distinct and uneven contours were detected. Internal structure was mainly hyperchromogenic (5-6 points), with nodulated surface. In 31.8% of cases we registered a tumor in uterine cavity. In projection of one of uterine angles, in a form of roundish neoplasm, with distinct and uneven contours, of hyperchromogenic structure. 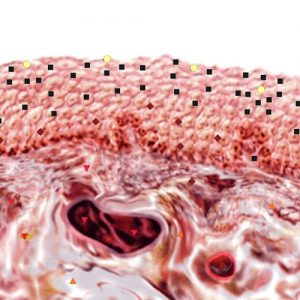 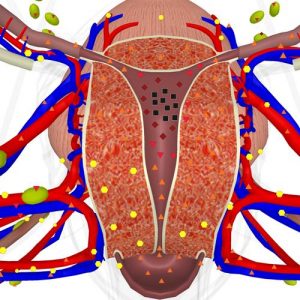 T2 stage is characterized in majority of cases (73.3%) by affection of midline structures in internal os area and in superior third of uterine neck (distinct and uneven contours).

So, as the above mentioned data shows, increasing of endometrium affection and invasive growth indices decreasing accompany tumorous invasion into myometrium. 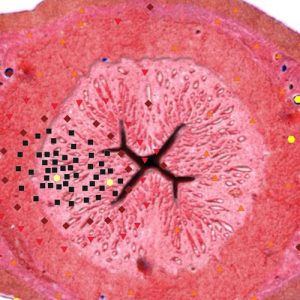 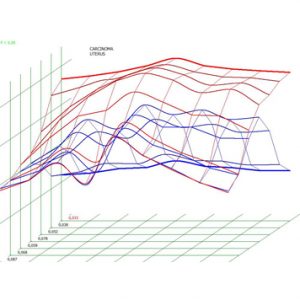 In 15.6% of studies we registered a significant affection of uterine tissues (6 points at Fleindler’s scale). At the same time in 7 patients uterine cavity was filled with a content of homogeneous hyperchromogenic structure, in 3 patients – of heterogeneous isochromogenic structure due to fine suspended matter. Application of three-dimensional NLS-graphy with SEA in this case allowed to evaluate accurately a condition of unaffected endometrium, morphological character, localization of a tumor, its metastasis into uterine cavity, form of growth, place and degree of invasion into myometrium.

Intratumoral blood flow was visualized in 98.6% of endometrium cancer cases. Analysis of tumor vascularization helped to single out various variants of NLS-angiographic pattern, basing on which four types of NLS-angiograms were identified.

1st type (31.3% of cases) was characterized by non-uniform strengthening of intraendometrial blood flow due to local increasing of fixed points number. At the same time we did not register increasing of hyperchromatic fixed points in subendothelial area.

2nd type (32.8% of cases) was characterized by total strengthening of intraendometrial blood flow due to large amount of randomly placed isochromogenic fixed points with simultaneous local (57.2%) or total (42.8%) increasing of hyperchromogenic points number in subendothelial area.

3rd type (15.6% of cases) was characterized by significant increasing of moderately chromogenic points number in in subendothelial area against the background of minor strengthening of intraendometrial blood flow.

4th type (20.3% of cases) differed from the three first types by presence of large amount of randomly placed isochromogenic fixed point in a projection of midline structures of uterine cervix.

In order to study intratumorous blood flow and its proper visual evaluation we used a method of three-dimensional NLS-graphy in combination with ultramicroscanning of vessels and following 3D-reconstruction of acquired image. Analysis of three-dimensional NLS-angiograms allowed to reveal disorganized type of blood flow, having the following distinguishing characteristics: irregularity of vessels affection inside a tumor, random and multidirectional lesion of vessels walls.

Therefore three-dimensional NLS-graphy with spectral-entropic analysis in combination with broad spectrum of modern NLS-graphic methods have strengthened positions of NLS-method in intranosological diagnostics of endometrium cancer, sovling a wide range of objectives:

– accurate localization of a tumor in an uterine cavity;

– depth of invasion into myometrium;