Efficiency of one of the most widely spread rheumatic disease – rheumatoid arthritis (RA) treatment has increased greatly in the last decade because of development and introduction into clinical practice of new medications, which can prevent inevitable progressing of joints destruction and joint dysfunction in patients with RA. Studies of RA pathogenesis allowed to make a conclusion about necessity in active early treatment, application of basic anti-inflammatory therapy (BAIT), because it can help to modify clinical course of the disease more efficiently and also it ensures positive prognosis for functional condition of affected joints. Appearance of new group of preparations – biological agents (antycytoktine therapy) and their application in combination with traditional means of BAIT allow to achieve a significant success in treatment of RA patients. At the same time it was found that duration of “therapeutic period” – a period of time since the moment of definite RA diagnosing till the moment when active therapy poorly affects joints destruction – is quite short – a year approximately, and the best results are achieved in the beginning of a therapy, within first three months since the incursion of the disease.

All abovementioned showed a need in perfection of existing methods of hardware visualization of bones and joints, especially of hands and feet, because typical affection of peripheral joints is one of diagnostic characters of RA. Traditional method, tested by decades of practical application and numerous clinical trials – roentgenography has sufficient specificity and accuracy – 93.7% and 85.5% correspondingly, but poor sensitivity – 77.2%. However because of physical parameters standard roentgenography cannot reveal affection of soft tissues, and achieved result – two-dimensional image, representing a summatory picture of various areas of a bone, has a certain limit of sensitivity and cannot be repeated frequently, due to dosage of exposure radiation, absorbed by a patient.

The researchers have carried out a number of studies which revealed the following: firstly, roentgenography does not allow to predict RA development in patients suffering from it, it is highly specific (96%), but low sensitive (17%); secondly, roentgenography data correlate with RA diagnosis during later stages since the moment of diagnosing, which is confirmed by other studies data.

The problem of an early diagnostics of RA is in revealing of minima, pre-erosive changes in joints and surrounding soft tissues, and also in defining of changes in arthrodial cartilage, synovial membrane, ligaments, tendons and bone marrow.

Modern radiodiagnosis of osseous-articular system affection includes ultrasound research, bones scintigraphy with contrast agent, destometry of hands and feet bones, CT and the latest methods, such as NLS-studies. We will not describe in details advantages and disadvantages of each of mentioned methods. However it should be noted that at the present moment the greatest interest is generated, apart from traditional roentgenography, by NLS-graphy, which can be fulfilled with two types of devices – low-frequency with a feature of two-dimensional visualization only (“Metatron”-4017 system with 860 MHz generator frequency) and high-frequency devices with a feature of three-dimensional reconstruction of an image (“Metatron”-4025 system with 4.9 GHz generator frequency). 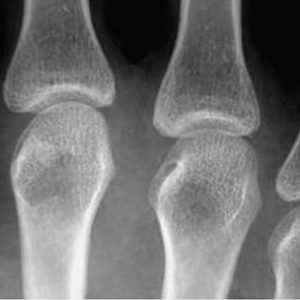 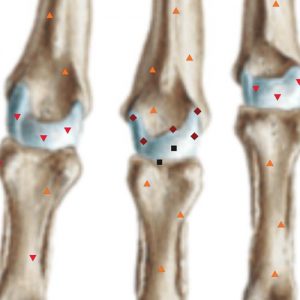 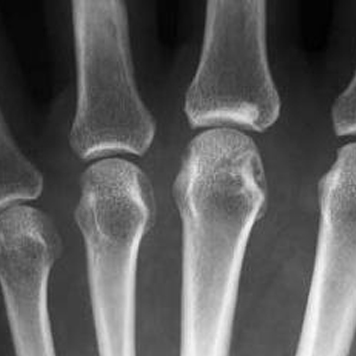 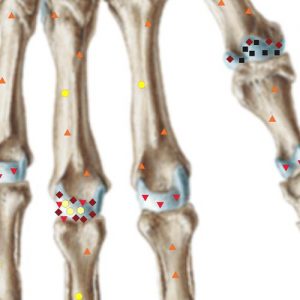 At the present moment there are no scientific works describing application of NLS in early diagnostics of RA. Until now the method is still not verified and consequently should be investigated further. Also high hopes are put on this method, because according to our data basing of results of NLS-study it is possible to carry out early and complete diagnostics of RA, stratify patients in accordance with erosive changes development risk rate and choose a proper tactics of patients with an early RA treatment. Thanks to the absence of radiation exposure, NLS research can be repeated quite frequently – it will allow to monitor changes in joints and surrounding soft tissues condition and efficiency of applied treatment, including with application of “biological” agents.

Thanks to comparatively affordable price of such equipment and simple requirements for installation of NLS-system, it finds more extensive application in comparison with CT and MRI. Also we should emphasize comparable sensitivity and specificity of researches with these devices.

At the present moment the major part of carried our researches in Russia represents studies with comparatively small amount of patients with application of low-frequency NLS-systems of obsolete models, “adjusted” to carry out researches of hands and large joins mainly. The present article gives qualitative characteristics of hands affection main symptoms, revealed with high-frequency systems “Metatron”-4025 for 3D NLS-diagnostics of patients with an early RA.

Possibilities of NLS-research method in visualization of processes related to affection of bones, joints and periarticular structures allowed to reveal and describe new data corresponding to typical manifestation of an early RA. Such finding include: ostitis, synovitis, destructive changes of bone tissue (cysts and erosion), tendinitis and tendinous synovitis, changes in arthrodial cartilage and changes in surrounding muscles.

Results of SEA correlated with materials of histological and cytological studies of samples taken from nidi of osseous and articular tissue affection in 87.8% of cases.

At the present time the majority of NLS-studies at RA are carried out to evaluate correlation between data regarding ostitis and osseous tissue destruction prognosis (often in combined research with the other laboratory indices, such as level of cyclic citrullinated peptide antibodies (CCP), C-reactive protein (CRP) and rheumatoid factor (RF). According to the results of these such a strong positive correlation between these 2 parameters was registered, which has a significant importance from the point of view of a disease functional outcome prognosis and monitoring of treatment effect to bones condition from the objective point of view, not basin on patient’s subjective perception (patient’s complaints) or indirect indices (laboratory activity, co-occurring synovitis and edema of surrounding tissues).

At ostitis hyperchromogenic areas in affected region of a bone are registered. One should differ such picture from osseous cysts and erosions which are also hyperchromogenic, have distinct edges and, as a rule, are small in size. Ostitis frequently goes together with synovitis, tendinitis and is combined with erosions and intraosseous cysts. However, osteitis may be the only symptom of possible erosive changes in this bone, especially at the early stages of a process or after treatment with anti-inflammatory medications, which together with other signs of activity and clinical data is an important symptom of a poor prognosis. SEA has fundamental importance at diagnosing of ostitis.

Synovitis of peripheral joints is one the diagnostic signs of RA, that can be easily revealed by NLS. Applied at the present moment traditional methods of arthritis evaluation by clinical examination has sufficient diagnostic accuracy, sensitivity and specificity – 81.5–85.3%, 79.4–86.6% and 83.5–86.6% for various joints of hands correspondingly. However this method has an obvious limitation – it is quite difficult to evaluate properly clinically present edema of hands and/or feet in patients with high body mass or peripheral edemas of various origins. 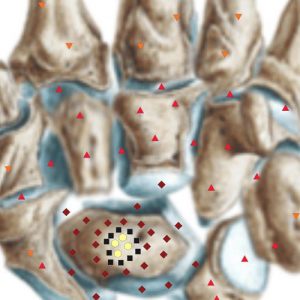 Pic 5. NLS of a wrist (cor). A cyst in a lunate bone surrounded by bone marrow edema area. Synovitis of a wrist joint.

Pic 6. NLS of a wrist (cor). Intense synovitis in wrist, intercarpal and metacarpophalangeal joints (grade 3 according to OMERACT-RAMRIS). Major cyst of a capitate bone.

Three-dimensional NLS-graphy with application of NLS-ultramicroscanning mode and spectral-entropic analysis allows to fulfill proper early diagnostics of synovitis. Recent study has shown that applying of NLS-ultramicroscanning mode with SEA helps to carry out differential diagnostics between RA and polymyalgia rheumatica – in the first case hyperchromogeneity of a nidus inside joint capsules (a symptom of inflammatory liquid accumulation) was registered, in the second case – in surrounding soft tissues. 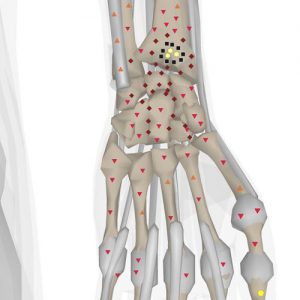 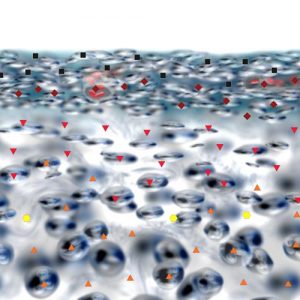 Synovitis is detected by NLS-scanning as an area of increased chromogeneity (4-5 points at Fleindler’s scale) in regions corresponding to anatomical location of synovial fluid.

We have revealed a correlation between intensity of wrist joint synovitis in NLS-image and by clinical indices (edema and morning stiffness), also we noted great sensitivity of SEA at synovitis diagnosing confirmed by biopsy (in 93.9% of cases). Another observation – we revealed high correlation between data of joints synovial membrane biopsy morphological research and results of NLS-ultramicroscanning with SEA of knee and elbow joints (in 89.8%).

According to OMERACT there are no difference between cysts and erosions, and destruction degree is measured in points from 1 to 6. In a work of A.U. Vassiliev cysts and erosions are studied separately, but in our study we preferred to use international method of evaluation OMERACT–RAMRIS.

Higher diagnostic possibilities of NLS in revealing of bone tissue destruction are defined by physical parameters of this method. Differing from roentgenography, where the basis of the method is absorption of x-ray radiation by osseous tissue, application of non-linear scanning method is based on evaluation of background information noise released by destructing biological structure. That is why NLS-diagnostic method allows to evaluate the earliest pre-clinical changes in organs and tissues, which is impossible to do using other hardware methods of investigations (x-ray, ultrasound, CT, MRI), that can detect already formed, “perceptible to the eye” pathological process.

This peculiarity of the method and the fact that NLS-graphic method (layer by layer crosscuts of an image, differing from standard roentgenography giving a summation image) allows to reveal much more changes in bones, joints and surrounding soft tissues. At roentgenography erosions located on the anterior and posterior surfaces of a bone and intraosseous cysts are “screened” by surrounding bone tissue and therefore cannot be revealed by roentgenography, but can be easily found by NLS-study.

A peculiarity of hands and feet anatomical structure is a presence of multiple different structures closely interconnected with each other and having different functions. Surrounded by fascial compartment tendons are holding a certain place among them, but from the point of view of RA diagnostics their affection per se is not significant and it is not included into diagnostic criteria. However considering that the changes in muscles tendons may be important for differential diagnostics of RA, and also that they contribute to development of joint stiffness and frequently accompany described earlier synovitis, we believe that it is necessary to mention this diagnostic possibility of NLS-visualization of tendons affection.

Until today the only approach to evaluation of tendinitis/tendinous synovitis intensity is still not defined. According to our data tendinitis at NLS-ultramicroscanning is shown as hyperchromogenic region in areas surrounding tendons of flexor and extensor muscles and evaluated at 5-6 points at Fleindler’s scalre. Development of tendinitis is an adverse factor for prognosis of hand joints functional condition and risk factor for development of joints destructive affection. That is why we believe necessary to recommend to carry out this evaluation in addition to standard method according to OMERACT–RAMRIS.

A possibility to “treat” erosion is by no means unimportant attribute. This phenomenon is registered regarding erosions both revealed by roentgenography and NLS-research. This notion means “disappearance” of erosion at the repeated after a while studies. There are discussions going about what this phenomenon means morphologically. Maybe solving of this question lies within the scope of NLS-method application. Probably it will be possible to create a wave spectrum of this process and starting out from it to define a morphological picture.

Owing to introduction of new methods of RA treatment and a need in an early diagnostics of the disease, NLS-study has become quite spread in rheumatologic practice. At the same time traditional method of radiology – standard roentgenography of joints still remain important.

Thanks to changing of treatment standards, at the present time in many medical centers around the world studies of applicability and efficiency of new diagnostic methods are being done.

Three-dimensional NLS is the most convenient, sensitive and comparatively affordable method of patients with early rheumatoid arthritis check-up, which can be used to predict various outcomes of joints incompetence and to monitor efficiency of applied therapy, in particular, with new “biolopgical agents”.

The main symptoms revealed at NLS-study of bones and the most inportant in early diagnostics of RA are destruction of bone tissue (erosions, cysts), ostitis and synovitis (tendinitis).