Skeletal system is the most frequent localization area of distant metastases in case of breast cancer (BC). Metastases in bones develop in 30-80% of breast cancer patients in the course of the disease. Bones are affected in the first place in 26-50% of patients who suffer from disseminated form of the disease. According to the information available the mostly affected areas are: vertebral column and pelvic bones. At the same time the risk of metastatic skeletal affection is high in case of generalized stages of disease; in case of I-II stage of disease the risk does not exceed 2.6%. That is why routine skeletal screening examination aimed at the detection of metastases in early disease patients with no clinical symptoms of bones affection is considered as unreasonable. Bone scan is usually used as a screening method in patients with common form of disease or upon availability of clinical data confirming bones affection. However bone scanning results are frequently uncertain due to low specificity of the method; also such method is not good at detection of lytic metastases. Roentgenologic research methods (including traditional radiography and computer tomography) are used to specify received data. Computer tomography is chosen more frequently as long as traditional radiography is under-sensitive and it detects destruction foci only in case of considerable loss of bone substance.

Computer tomography allows separate visualizing of cortical and trabecular bones and also surrounding soft tissues, though it also does not provide an early diagnostics of metastatic lesions in bone marrow.

The advantages of new 3D NLS method are: direct display of bone marrow and the visualization possibility of its tumor infiltration before any bone alterations appear.

Other considerable advantages of 3D NLS-method are: availability, usability and fast rate of examination. The latest technical achievements in this field led to the creation of special modes in 3D visualization (4D Tissue, DeepVision, FastVision) which provide exceptional image quality.

Unique ultramicroscanning technique (which exists only in NLS-method) with the use of spectral-entropy analysis allow determination of morphological affiliation of the formation according to its spectral similarity to model processes, assess metastatic lesion of skeletal bones, surrounding soft tissues and lymphatic nodes, determine the presence and type of genetic aberrations in tumoral subclones which eventually will determine the scope of surgical treatment.

Characteristics of examined patients. Prospective study includes 33 breast cancer patients. They were randomly selected from April, 2009 up to June, 2010. The average age of patients is 51 (from 30 to 68). Among examined ones there were 9 patients with breast cancer diagnosed for the first time, the rest of 24 patients were examined at different dates after combination therapy. Inclusion criteria into the study were the following: widespread stage of the disease at the moment of diagnosing and/or high clinical possibility of bone metastases in the process of case follow-up after special treatment of breast cancer.

All patients were treated with the use of 3D NLS and CC with 99mTs-Technephore. Time interval between the researches did not exceed 25 days. X-ray examination including helical computer tomography (HCT) of thoracic and abdominal cavity or clinical observation with duration of not less than 6 months including radiological research methods of skeletal system served as a referential method; nonperforating trepanobiopsy of flank bones with histopathological examination of received material was performed in 6 patients to verify metastatic lesions of pelvic bones.

3D NLS method. Scanning was performed using «Metatron»-4025 system with software program which allows visualization of all skeletal bones, surrounding soft tissues and lymphatic nodes. NLS-research started from the assessment of the whole body and then the following body parts were assessed at detailing: head and neck; torso and proximal shoulder parts; pelvis and proximal femora parts. Research protocol for each anatomical part included the following data: large-scale NLS-scanning in 3D mode at 3 mutually transverse planes; ultramicroscanning mode in the regions of interest with spectral-entropy analysis. Total time required for the research was approximately 30 minutes.

Bone scanning method. Skeletal system bone scanning was performed with the use of two-detector gamma camera according to the standard method in anterior and back view in 2 hours after intravenous injection of 740 Mbk 99mTs-Technephore.

Data analysis. Focal or diffuse (homogeneous or heterogenous) chromogenecy increase of the focus more than 4 points according to Fleindler’s scale was considered as a sign of metastatic lesion during NLS-graphy. Changes of bone marrow were considered as benign in case of their localization directly under degenerative changed disks or near to the articular surfaces. Spectral-entropy analysis had crucial significance in all cases.

High spectral similarity (D<0,425) with etalon «Metastatic tumoral subclone» generally referred to metastatic lesion focus. Results verification of spectral-entropy analysis was performed based on histologic examination of trepanobioptates received after trepanobiopsy of bony tissue in the area of interest. The results of spectral-entropy analysis were confirmed by the histological methods in 99.1% of cases.

The probability of metastatic lesion (when performing bone scanning) was assessed according to the localization and quantity of super-active foci with consideration of radiopharmaceutical hyperfixation in them.

Skeletal system was divided into 10 anatomical parts to perform analysis of research results. These parts were: neck vertebrae, thoracic vertebrae, lumbar vertebrae, pelvic bones, cranial bones; proximal parts of thigh bones; proximal parts of humeri, collar bones and scapulae; ribs; breast bone. The research results were determined individually to each anatomical part in whole considering it as a single lesion regardless of the number of metastatic lesions in it. 3D NLS and bone scanning results for each part were ranked as positive, controversial or negative. Result verification was performed based on X-ray examination data, including helical computed tomography, histological inspection or clinical observation with the use of radiology methods

Comparison of diagnostic effectiveness of 3D NLS and bone scan was performed by receiver operating characteristic curve method with the use of application statistical programs package SPSS 11.5 for Windows. As supplementary to it the detailing of detected lesions in skeletal system parts was performed for each method.

As can be seen from the above we used 3D NLS method which allowed receiving images of proximal parts of femoral and humerus bones, pelvic bones and major part of axial skeleton, ribs and cranial bones with quality suitable for diagnostic purposes.

In total 330 skeletal parts were assessed in 33 of patients with the use of NLS-graphy and bone scanning, verification was performed in 200 parts which were used for the further analysis. Metastatic lesion was diagnosed in 126 parts out of 200, in 74 parts there was none.

NLS-graphy detected 114 out of 126 parts, controversal results were received in 2 cases (both did not confirm at verification), no false-positive results. In the mode of NLS-ultramicroscanning the majority of metastatic lesions visualized well.

Bone scanning detected 87 out of 126 parts, controversal results were received in 20 cases (16 of them did not confirm at verification), 1 case of false-positive result.

Response curves were modeled in coordinate axes «sensitivity» and «specificity». Diagnostic effectiveness of the test when using receiver operating characteristic (ROC) method is defined by the area under curve; notably that the bigger the area the more effective method is. Area under curve for NLS-graphy was 0.951±0.016 (95% DI 0.920–0,982), for Bone scanning–0.821±0.026 (95% DI 0.764–0.879). It shows the higher diagnostic efficiency of NLS-graphy in comparison to bone scanning. After that the number of detected lesions with the use of each method according to individual anatomical skeleton parts was compared. As can be seen from pic.4 the metastatic lesion of skeletal system was detected more frequently (in majority of examined parts) with the use of NLS-graphy than when using bone scanning. Bone scanning proved to be more effective at X-raying of ribs and cranial bones. Diffuse lesion of pelvic bones detected at NLS-graphy in 6 patients was proved by the results of nonperforating trepanobiopsy of flank bones; notably that in 3 out of 6 patients there were no changes on scintigrams.

High efficiency of NLS-graphy in detection of tumoral infiltration of bone marrow was demonstratively proved by our researches and it has determined the intention to change from NLS-visualization of separate skeletal system parts (where bone metastasis may supposedly locate according to the data of other research methods) to NLS-screening of bone metastases in the whole body. Originally such screening was performed by sequential NLS-scanning of 5-7 anatomic parts spreading to the whole skeletal system. The first assessment of results of NLS-graphy in Russia (Andriyanov A. and others) showed that its diagnostic effectiveness surpasses bone scanning. The reason is clear since NLS-graphy allows metastases detection in bone marrow before any osteolytic and osteoblastic bone response appear, i.e. at an earlier stage than in bone scanning.

The recent years are characterized by an active development of new NLS-graphy technologies. In the first place it is 3D-ultramicroscanning technology initially intended for angiographic NLS-researches.

The assessment of received image quality showed that it has the best quality and it is quite usable for diagnostics concerning the majority of examined skeletal parts. The comparison of diagnostic effectiveness by ROC curve method showed the predominance of NLS-graphy screening over bone scanning method. The key advantage of NLS-graphy was the detection of the more spread metastatic affection in spine and pelvic bones.

Treatment of patients with bone metastases of breast cancer is possible by means of various methods, including radiation, drug or systemic treatment and also surgical, multimodality and combination therapy. Precise evaluation of metastatic lesions prevalence has important significance in choosing of correct treatment mode.

According to the references data 41% of bone metastases are multiple in case of breast cancer and 37% of them are combined (i.e. other organs are also affected along with skeletal system). Performed research has demonstrated that NLS-graphy allows effective detection of metastatic lesions not only in skeleton but also in liver, brain and even lungs. 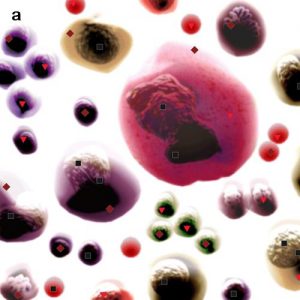 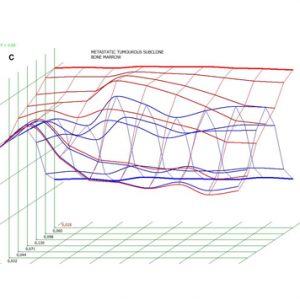 Although for a variety of reasons NLS-graphy in our country cannot be regarded as an alternate method to bone scanning when performing screening test of bone metastases of breast cancer; such method may be used in patients with inconclusive results of bone scanning and high clinical risk of metastases formation and also in cases when correct information on spreading of metastatic process is necessary for the choice and planning of treatment method appropriate to the extent of lesions.

NLS-graphy performed by the sequential scanning of three anatomical parts allows more effective (in comparison to bone scanning) detection of bone metastases in the majority of anatomical parts. NLS-graphy is a promising screening technique of bone metastases and it allows simultaneous detection of metastases in other organs; it helps the clarification of further examination program and the reduction of applied number of diagnostic techniques.