Malignant pancreatic neoplasms incidence in Russia was 9.2 cases per 100 thousand people (3% of all malignant neoplasms) in 2009. High incidence rate of malignant pancreatic tumors is peculiar to group of people above 75 (45.8%). On the other hand constantly improving methods of surgical treatment require more precise and well-timed diagnosing of pancreas diseases. It is especially pressing at pancreas cancer, diagnosing of which still remains one of the most difficult tasks of the modern diagnostics. Low percentage of pancreas cancer operability (less than 10% on the average) and unsatisfactory distant results of extensive and standard gastropancreaticoduodenal exsection are related, first of all, to diffused character of the disease in patients at the moment of surgical intervention. That is why a precise diagnostics of pancreas cancer at the early stages is the necessary condition for successful treatment. Today in the well-equipped medical institution search of nidal affection of pancreas is carried out with the help of such standard methods of visualization as ultrasound, CT and MRI, their diagnostic value for evaluation of pancreas condition is unquestionable. At the same time, recent development of new computed NLS-technologies forces us to reconsider importance of this method in search of space-occupying processes in pancreas and puts this method forward. It became possible after introduction of new NLS-technologies, such as three-dimensional NLS-graphy, ultramicroscanning with spectral-entropic analysis (SEA), NLS-angiography and others into a practice. These technologies provide very high space resolution of NLS-research, allow to evaluate morphological character of neoplasms non-invasively, acquire precise topographically oriented images of various blood vessels.

In this work we tried to specify diagnostic potential of new non-linear technologies at search and differentiated diagnosing of space-occupying affections of pancreas.

The present study is based on materials of combined diagnostics of 28 patients with local changes in a structure of pancreas. In 16 patients pancreatic cancer was diagnosed (the 1st group), in 3 patients – pseudo-tumor-like pancreatitis (the 2nd group) and in 9 patients – chronic pancreatitis with ganglions (the 3rd group). NLS study of all patients was carried out using “Metatron”-4025 system of the last generation, equipped with digital trigger sensors with 4.9 GHz generator, “Metapathia GR Clinical” software with a feature of three-dimensional reconstruction of organs and tissues. The study started with evaluation of a pancreas parenchyma in three-dimensional mode. A condition of major retropancreatic vessels was evaluated with the help of NLS-angiography methods, including three-dimensional reconstruction. To specify affection character of vessels in pancreas parenchyma we used a method of three-dimensional reconstruction in ultramicroscanning mode. In 11 patients with assumption of pancreatic cancer we used NLS-ultramicroscanning with SEA, which allowed to define morphological structure of a neoplasm.

At a study in three-dimensional mode of all patients suffering from pancreatic cancer (the 1st group) a hyperchromogenic (6 points at the Fleindler’s scale) solid neoplasm of homogeneous structure with uneven and indistinct contours was visualized.

Diameter of the neoplasm was 2.5-7.2 cm (4.3 cm on the average). Analysis of images in NLS-ultramicroscanning mode made possible to visualize contours and structure of the neoplasm more precisely. In 2 cases (12.5%) in the structure of a solid neoplasm a cystic component, non-visualized in usual mode, was detected.

In all patients with pseudo-tumor-like form of chronic pancreatitis (the 2nd group) three-dimensional mode showed affection of pancreas head (4-5 points at the Fleindler’s scale) with moderate heterogeneity of parenchyma’s structure. 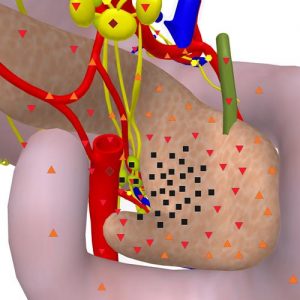 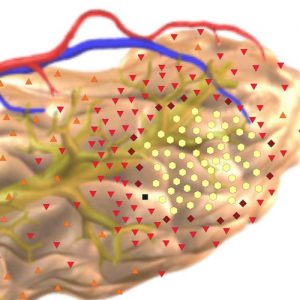 In the group of patients with cystic form of chronic pancreatitis three-dimensional mode showed cysts with localization in pancreas head area as achromogenic neoplasms (1 point at the Fleindler’s scale) with heterogeneous structure of 3.6 cm size on average in 4 patients (44%). Using of ultramicroscanning mode allowed to visualize clearly achromogenic structure of cysts with internal hyperchromogenic walls. In the rest 5 patients cysts were localized in body and tail of the gland; this mode improved visualization of contours and internal structure of cysts. 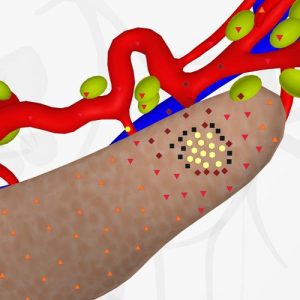 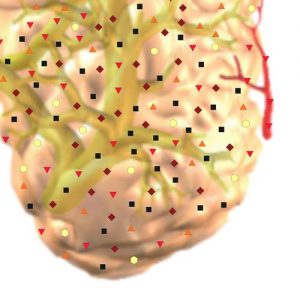 In the groups of patients with pseudo-tumor-like and cystic forms of pancreatitis the study has revealed damages of retropancreatic vessels walls as a consequence of acute pancreatitis.

For differential diagnostics between pseudo-tumor-like pancreatitis and pancreatic cancer we used SEA, results of which were confirmed in 97.2% by biopsy. 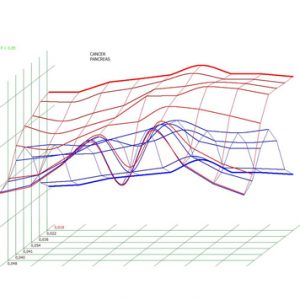 Modern methods of NLS-scanning – ultramicroscanning, spectral-entropic analysis, three-dimensional reconstruction of organs – allow to gather additional information about a structure of a tumor, extent of retropancreatic vessels and lymphnodes involvement into a pathological process, which is quite important for planning of surgical intervention. Accuracy of NLS with ultramicroscanning and SEA in detection of tumorous invasion at pancreatic cancer is 89 – 98%.

A comparative analysis of common NLS-data and ultramicroscanning with SEA data has proven unquestionable advantage of new technologies in representation of pancreas structure. Using ultramicroscanning we managed to define limits of tumorous infiltration and visualize solid and cystic component of space-occupying masses in pancreas parenchyma. We should emphasize high information value of the new technologies in revealing of cystic structures. Thanks to proper study of liquid component such diagnostics becomes quite easy and comfortable for a therapist.

Another important advantage of the new NLS-technologies is a possibility to visualize affected retro- and intrapancreatic vessels. Scanning in NLS-ultramicroangiography mode makes possible to acquire precise information about condition of pancreas parenchyma microvascularisation. Application of three-dimensional reconstruction allows to get precise spatial image of vessels, including those in space-occupying mass. Differential diagnostics of pancreatic cancer and pseudo-tumor-like pancreatitis was highly reliable at application of SEA. Prospect of the NEW NLS-technologies application we relate to simultaneous acquisition of multidimensional images a gland’s parenchyma and vessels. Virtual programs promote transferring of high-quality three-dimensional pictures with required prospective and any scale.

Thus computed NLS-technologies give conceptually new diagnostic information about patients with space-occupying masses in pancreas. Achieved results put forward NLS-method as a competitor of CT – “the gold standard” of nidi searching in pancreas.