To determine information value of 3D NLS-graphy in detection of gall-ducts concretions a retrospective analysis of 42 patient’s clinical histories was performed. These patients were taken to the clinic with the symptoms of biliary obstruction (concrements of common bile duct) (main group). The control group consisted of 30 patients with no signs of gastrointestinal tract system and hepatobiliopancreatic system diseases who were treated at in-patient hospital. Comparative analysis of the results of three-dimensional NLS-research and common NLS-graphy data in 2D, X-ray computed tomography, endoscopic retrograde cholangiopancreatography and intraoperative findings was carried out. The advantages of 3D NLS-graphy in detection of small concrements (5mm. and less) were demonstrated. The response level (94.7%) and the specificity (97.4%) of 3D reconstruction of an image methods in detection of small concrements significantly surpass the response level (59.5%) and the specificity (75.1%) of common 2D NLS-research.

NLS-research methods in primary diagnostics of diseases of abdominal cavity organs become more and more available. Up to the present moment the NLS-images were in 2D which did not cover the dimensioned interrelation of structures under research. Significant information volume and accuracy increase is required to achieve fundamental improvement in NLS-image quality.

That is why appearance of «Metatron»-4025 systems with 3D pictures feasibility became a new development stage of NLS-graphy. The multidimensional reconstruction mode is based on rendering of 3 mutually perpendicular imaging planes of the organ. The advantage of such method is getting of accurate topographic-anatomical interrelations between targeted structures which results in improvement of picture perception.

Prognostic significance of 3D non-linear picture reconstruction in practical diagnostics is still being updated at the present moment. One of the possible upcoming trends of usage of the given procedure is an early detection of pathological changes in gastro-intestinal tract organs which requires emergency and scheduled surgical measures.
NLS-diagnostics may become a procedure of choice for detection of concrements and dilatation degree of bile passages. When examining of patients with choledocholithiasis the classical picture of concrement is a hyperchromogenic structure (5-6 points according to Fleindler’s scale) of various forms. The accuracy of 3D NLS-diagnostics of choledocholithiasis is more than 95.0%.

Due to approximate density values of cholesterol stone and bile surrounding it the use of X-ray computed tomography does not allow concrements visualizing of the common bile duct especially in case of their small sizes and the lack of bile or pancreatic ducts ectasia. Also because of this the concrements cannot be differentiated with major duodenal papilla cancer. In this case the use of 3D NLS-research with spectral-entropic analysis is mostly reasonable in diagnostics of complicated cases of choledocholithiasis in case of accompanying chronic indurative pancreatitis and also for differential diagnostics of choledocholithiasis with pancreatic gland and bile ducts tumors. X-ray computed tomography is less sensitive to the detection of choledocholithiasis but it identifies more accurate the side and the cause of extrahepatic biliary obstruction in comparison with 2D NLS-diagnostics.

The objective of this study is to determine information value of 3D NLS-graphy in the detection of bile ducts concrements.

MATERIAL AND METHODS OF THE STUDY

Retrospective analysis of 42 case records of patients who entered a hospital in 2008-2010 with symptoms of biliary obstruction (concrements of common bile duct) was performed. These patients formed the main group. The duration of symptoms in the main group patients varied from 2 days to 3 weeks. The control group consisted of 30 patients with no signs of gastrointestinal tract system and hepatobiliopancreatic system diseases (Table 1) who were treated at in-patient hospital.

At the first stage all patients underwent common 2D NLS-research of hepatobiliarypancreatic system organs including NLS-research of bile-excreting ducts, major duodenal papilla and head of pancreas. Then the methods of 3D NLS-reconstruction of an image and other instrumental and laboratory methods in accordance with medico-economical standards for given nosological entity were applied to determine the nosological form of the disease.

– multiplanar volumetric reconstruction of images with formation of a cube, cross section of which can be examined in any of three orthogonal projections.

Using multiplanar volumetric reconstruction of pictures function one can receive multidimensional picture of any anatomical structure. After that the data analysis is performed without presence of the patients.

The results of 3D NLS-research were correlated with the results of common NLS-graphy in 2D mode, X-ray computed tomography, endoscopic retrograde cholangiopancreatography and intraoperative findings (Table 2).

When using surface volumetric reconstruction and multiplanar volumetric reconstruction of pictures modes the sharpness of visualization of volumetric formations located in hard-to-reach parts of common bile duct (pre-papillary part), Vater’s papilla or pancreas head areas significantly improves. Especially it is important for elderly patients who are not always can be subjected to invasive manipulations.

One of the common complications of gallstone disease is choledocholithiasis. Choledocholithiasis with temporary biliary hypertension is the most difficult one for the diagnostics (when the size of concrement is a bit smaller than the diameter of common bile duct, so-called valvular stone). In this case the detection of concrements in common bile duct is quite difficult. The complexity of diagnostics is in the absence or insignificant dilatation of bile ducts and small sizes of concrements.

Choledocholithiasis was diagnosed in 39 of 42 patients upon performance of a common 2D NLS-examination. In case of 3D reconstruction of NLS-image the concrements in common bile duct were detected in 40 out of 42 patients. In 2 patients the concrements with diameter less than 3 mm. were not detected during ultrasonic inspection (in the beginning of 3D NLS-graphy method application when concrements were located in the ampulla of major duodenal papilla and the absence of common bile duct dilatation). In these cases choledocholithiasis was detected as a result of diagnostic endoscopic retrograde cholangiopancreatography performance. 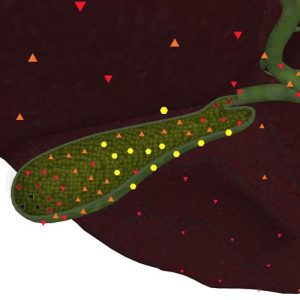 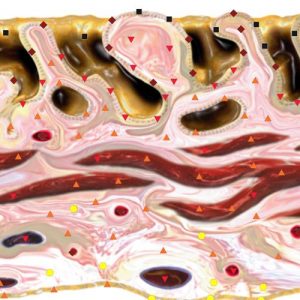 The use of 3D processing modes of NLS-picture allowed slight improvement of small concrements visualization (4 mm. and less) especially in case of lack of biliary hypertension symptoms or insignificant increase of the diameter of common bile duct (Table 4). Used methods of superficial and multiplanar volumetric reconstruction of pictures of anatomical structures allowed significant improvement in detectability and finding of concrements position. The response level (95.2%) and the specificity (97.9%) of 3D reconstruction methods of picture in detection of concrements exceeds the response level (62.9%) and the specificity (86.8%) of a common 2D NLS-research. The main problem in diagnostics of choledocholithiasis was to determine the number and real size of concrements.

X-ray computed tomography was used to confirm the symptoms of bile passages and major pancreatic duct ectasia. Endoscopic retrograde cholangiopancreatography procedure (response level and accuracy more than 99%) had priority in confirmation of «choledocholithiasis» diagnosis. But the use of given method in 23.5% of cases was accompanied by the development of complications (technical complications upon removal of concrements, haemorrhage, development of acute pancreatitis).

From biomedical blood measurements the following valid changes were received: precipitation of erythrocyte sedimentation rate, total bilirubin level increase (mainly caused by the direct fraction), amylases (in case of acute pancreatitis appearing), alkaline phosphatase and aminotransferase and also carbohydrate antigen (CA-19-9) in patients with evident biliousness more than 37 IU/ml. It should again be noted that various types of operative interventions on gall bladder and bile passages were performed in 27 patients (64.3%) who suffered from choledocholithiasis.

As can be seen from the above, 3D NLS-graphy is an all purpose screening diagnostics method of hepatobiliary system organs diseases. This is a new high-precision technological effective special research method targeted at solution of clearly marked clinical problem. In the present time the methods of 3D NLS-research allow more demonstrable presentation of received results and it makes easier to interpret them by clinicians. 3D NLS-graphy expands opportunities of the common 2D NLS-research due to space pattern and cross-sections previously not available for examination. The use of specific data (especially on the stage of application of the new technique) does not exclude the use of generally accepted algorithm of patient examination but it allows more accurate interpretation of the obtained results. Given technique may be used at an early stage of patient examination because of its availability, relative low-price of the research systems and saving of the time needed for drawing of the conclusion.