Lacrimal passage diseases are one of the most widespread among eye diseases. Lacrimal passage disorders registered in all age groups. Such disorders found 8 times more in women than men patients. Such patients consist 10% of the total number of ophthalmological branch patients according to our records. R.Kuran researches show that there are 6-25% of such patients (2-7.5% among these numbers suffer from chronic dacryocystitis). Because of its frequent involvement into pathological processes, detailed information on anatomic-topographic features of lacrimal passages must be provided. Dacryocystitis accompanied by lacrimation causes a lot of uneasiness and lowers working capacity of the patients, especially if it involves accurate and scrupulous job performance (doctors, aviators, assembling fitters). Dacryocystoradiography is a standard diagnostic technique in such pathology. This method allows evaluating both lacrimonasal passages condition and obliteration progression, though soft tissues and facial osseous structures summation does not provide exact localization of the process. It also does not provide affinity estimation with nose accessory sinuses.

Condition estimation of normal and pathologically changed lacrimal passages based on available and effective hardware diagnostics methods remains problem number one at present.

Nowadays potential of NLS and also CT (computer tomography) research methods is not used at its maximum and it is not implemented in medical treatment standards. Therefore the implementation of hardware diagnostics high-tech methods is a must to fulfil adequate and effective lacrimal passages diseases diagnostics.

Contrast enhancement was performed after prewashing of lacrimal passages via lacrimal openings by physiological solution. Thickness of tomographic slice – 0.38 mm. Multiplanar reconstructions in coronary, axial and sagittal sections were modelled.

After using of multispiral computer tomography with contrast enchancement, chronic dacryocystitis was characterized by lacrimal sac enlargement on average up to 15.0 × 10.0 × 10.0 mm., with even sharp contours, homogeneous contents; canaliculi were enlarged up to 10.0 mm., sharp-contoured. Luminal narrowing of nasolacrimal duct was registered in 4 patients; complete lumen obliteration was registered in 4 other patients. Narrowing in distal part of nasolacrimal duct was registered as the most often factor. Thus pathology of accessory sinuses of nose was diagnosed in 7 patients. 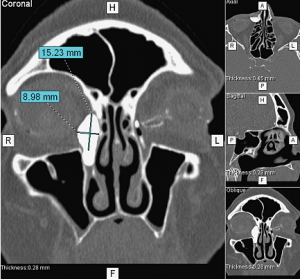 Chronic post-traumatic dacryocystitis was diagnosed in 2 patients after using multi-layer spiral CT with contrast enchancement. Acute ectasia (15.5 × 7.6 mm) of lacrimal sacs on both sides with sharp and straight contours was registered. In both cases nasolacrimal ducts did not visualize due to osseous structures injury of nasolacrimal ducts.

Lacrimal ducts obliteration was diagnosed using multi-layer spiral CT with contrast enchancement. Patency blockade of lacrimal ducts with no contrast substance in subjacent parts of lacrimal passages was registered. Moderate widening of lacrimal ducts lumen up to 1.1 mm. with sharp and straight contours was also found.

In case of such pathology, it is preferable to perform NLS after surgical intervention and placement of silicone capillary tube. 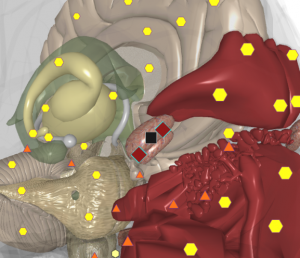