For the last few years significant changes in diagnostics of renal tumors have taken place.

Introduction of NLS-scanning into medical practice as a screening-method of renal neoplasms detection has led to increasing of revealed “symptomless” patients, for whom diagnosing of renal tumor was completely unexpected. Epidemiology of renal tumor at the present moment is characterized by increasing of disease incidence, which is mainly related with improving of diagnostics. At the same time a number of patients with remote metastases of renal cancer has decreased from 25% to 5%. Number of patients examined due to manifestations of renal neoplasm (haematuria, pain in lumbar region, palpable mass in hypochondrium) has been constantly decreasing. Pathomorphism of a disease has happened – extrarenal symptoms are its typical signs, but above mentioned standard triple does not allow to set a diagnosis in proper time and is typical for late stage of blastomatous process.

The recent years were marked by introduction of three-dimensional (3D) computed NLS-graphy, in addition to common two-dimensional study. Computed modeling of spatial relations of various renal structures is carried out in by ultramicroscanning with spectral-entropic analysis (SEA) with three-dimensional reconstruction that allows to specify location of a neoplasm in relation to renal vessels and calices-pelvis system in various projections, to identify morphological structure of neoplasms by spectral similarity to etalon processes. Three-dimensional NLS-graphy allows to detect space-occupying mass in more than 95% of patients, to identify nature of an illness almost in 90% and to identify cancer stage in 80-85% of patients. Extensive diagnostic possibilities of mentioned methods were the reason to reconsider the importance of NLS-graphy for patients suffering from renal tumor. Supporters of this point of view emphasize lesser financial expenses because of decreasing of both examination time and time of patient’s stay in hospital before surgical intervention. When a tumor is revealed by common two-dimensional examination, three-dimensional computed NLS-ultramicroangiography is applied as the next step. The advantage is given to ultramicroangiography with three-dimensional reconstruction because of a possibility to get an image of vasculature by non-invasive method. If there is a suspicion for renal cancer growing into renal vein or inferior vena cava, NLS- ultramicroangiography is a method of choice as well. If character of a neoplasm is unknown, spectral-entropic analysis with following monitoring by needle biopsy of a kidney under NLS-guidance is applied. Morphological study of tumorous tissue and identification of tumorous cells differentiation stage using spectral-entropic analysis prior to surgical intervention is one of the criteria for choosing of organ-removing or organ-preserving surgery. Results of SEA were confirmed by needle biopsy findings in majority of cases (97.3%).

In the period of 1992-2002 we have studied 436 patients with renal tumor in urology department of the clinic.

We used a variety of methods to detect neoplasms in kidneys and to specify characteristics of tumorous process at pre-surgery stage. Frequency of one or another research method application depended on character and size of a neoplasm.

Renal tumor is characterized by peculiarities of diagnostic actions. Combined vascular study is applied less frequently. In cases when neoplasm size was 2.1-7.0 cm it was applied in 85% of cases, but when size of a renal tumor was lesser – in 62%. To learn peculiarities of affected organ’s angioarchitecture we applied ultramicroscanning with three-dimensional reconstruction of tumor, calices-pelvis system and vessels interrelation, and also NLS- ultramicroangiography. After detection of lesser renal tumor with common two-dimensional NLS-study, we, as a rule, recommended three-dimensional NLS-ultramicroscanning with spectral-entropic analysis and usually acquired data confirmed presence of a tumor. 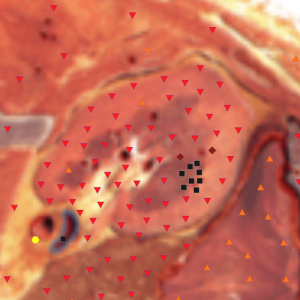 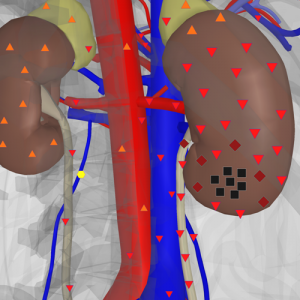 During studies of patients with renal tumor, a special attention is paid to NLS-study of urogenital system organs. Three-dimensional NLS-study allows to get an overview of dominating spreading of tumor anteriorly or posteriorly, identify depth of tumor spreading into renal parenchyma and relation of intra- and extrarenal part of a lesser neoplasm. Detection of multifocal character of tumorous growth is also possible with the help of ultramicroscanning with spectral-entropic analysis.

During NLS-ultramicroscanning we evaluated a condition of fibrous capsule of a kidney, inferior vena cava, lymph nodes (including aortacaval space), which helped to identify stage of renal tumor. 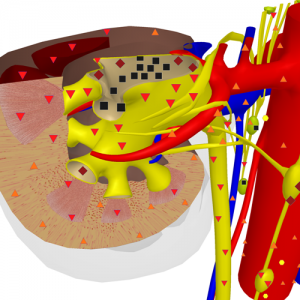 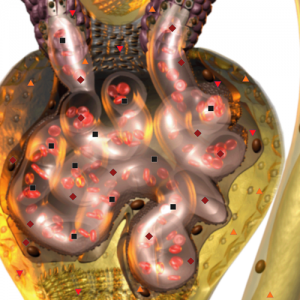 Therefore NLS-study is not only an independent research method, but it can be a part of other methods. Particularly NLS is applied in order to visualize kidney at percutaenous needle biopsy. It is well known that no modern study method, except for NLS-ultramicroscanning with spectral-entropic analysis, does not provide a chance to identify morphological structure of a tumor prior to surgery, but sometimes allows to presuppose its character. Therefore, all other methods give approximate information about greater or lesser malignancy of tumorous process and there is no way to judge about degree of differentiation of tumorous cells. It makes spectral-entropic analysis of renal tumor a very interesting non-invasive intravital study method of renal tissue. Study of tumorous tissue, acquired in SEA under guidance of NLS, gives an opportunity to evaluate degree of tumorous cells differentiation, which can influence choosing of organ-preserving or organ-removing surgical intervention. Besider, pre-surgical spectral-entropic analysis decreases time of operation, eliminating expectation of intraoperative express-biopsy results. 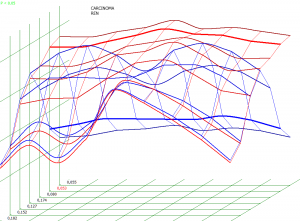 Spectral-entropic analysis or puncture biopsy of lesser tumor have a great importance for patients with severe intercurrent background, because getting of documentary evidence of tumorous process malignancy provides legal protection in case of surgical intervention.

The great importance in evaluation of organ-preserving operation possibility belongs to kidney revision after singling it out from paranephric fat with intraoperative NLS-study that allows to detect boundaries of a tumor and depth of its spreading into renal parenchyma, and detect multifocal character of tumorous growth.

NLS-study is not a study only acknowledging presence or absence of a tumor anymore. Visualization of calices-pelvis system before and after introduction of diuretic allows to evaluate functional abilities of upper urinary ducts. NLS has a great importance for patients with renal cancer combined with nephrolithiasis. Detection of a tumor and a stone in non-affected by cancer part of a kidney simultaneously makes allowances in technical procedure of surgical operation, because along with removing of a tumor, a stone must be removed and nephrostomy carried out. During planning of organ-preserving operation NLS-ultramicroangiography with alprostadil is an informative test allowing to evaluate functional reserves of renal parenchyma and adequacy of opposite kidney bloodstream.

Computed NLS-graphy was applied in accordance with standard practice. During interpretation of NLS-gramms it was possible to evaluate location and size of a neoplasm, its structure and interrelation with other organs and tissues, condition of regional lymph nodes, invasion of a tumor into renal vein and inferior vena cava. Additionally we carried out computed NLS-graphy of abdominal cavity and retroperitoneum organs.

For more detailed identification of blastomatous process and its stage of distribution into surrounding tissues we applied method of reconstruction of secondary crosscuts – multiaxial reconstruction of lateral, saggital and frontal crosscuts. Computed NLS-graphy in axial projection give a good representation, but does not provide integral image of multimensional organ.

In renal tumor staging process the most important information is acquired with use of three-dimensional NLS-scanning. After operation and study of removed organs and tissues by morphologist, we corrected stage of a disease, previously set by spectral-entropic analysis.

The following aspects must be emphasized when tumor staging is carried out.

1. Prior to surgical intervention the majority of patients with lesser tumor (89.3%) was considered to belong to T3a stage of cancer. This stage was set in accordance with results of pre-operative study. Local spreading of a tumor was evaluated on the basis of three-dimensional NLS-study data mainly – is a neoplasm comes out of a kidney’s contour, this stage was considered as T3a. However following study of a preparation by morphologists, that was acquired during organ-preserving or organ-removing operation has proven that in majority of patients was not growing of a tumor into paranephric fat, but squeezing of fibrous capsule of a kidney, not affected by a neoplasm. T3a stage of cancer was confirmed in 13.1% of patients corrected.

2. Correction of tumor stage is required not only in relation to T stage, but in case of N stage (affection of regional lymph nodes) as well. When NLS-graphy reveals two or more affected regional lymph nodes (in this case size is not taken into account), their condition is considered as N2, which automatically refers this patient to IV stage of renal cancer. It is well known that affection of lymph nodes not always evidences their metastatic affection, it may be a manifestation of follicular hyperplasia and histiocytosis. Therefore in relation to N criterion we also applied correction with consideration of data gathered after study of preparation acquired during lymph node dissection. Affection of lymph nodes was revealed in 24 of 143 renal cance patients before surgery, but metastatic affection was confirmed by SEA in 6 (25%) of them only. At the same time micrometastases of renal cancer in lymph nodes are revealed in 8 patients, who, prior to surgery, were considered as patients without lymphogenous metastases. Percentage of confirmed lymphogenous metastasing among 143 patients was 9.8%. 57% of all metastases into lymph nodes, detected by spectral-entropic analysis, were microscopic. It is one of the pro-arguments for mandatory application of extended lymphadenectomy during surgery because of lesser renal tumor, irrespective of its character (organ-preserving or organ-removing).