We carried out 439 NLS-studies of knee joints using “Metatron”-4025 system with “Metapathia GR Clinical” software and a feature of three-dimensional visualization of knee joint.

Three-dimensional non-linear scanning getting a special importance as highly-informative method of knee joint pathology diagnosing in comparison with CT and MRI, first of all owing to lesser cost of a study, at the same time diagnostic advantages of the latter are not so evident in this field. This fact is proven by growing application of NLS system in orthopedics.

Diagnostic value of NLS-graphy in respect to knee joint pathology is extremely high for non-invasive method. It is proven that at acute trauma of knee joint NLS-graphy reliably decrease time needed for diagnosing, improves quality of life within the first 6 weeks after a trauma, decreases total expenses. Also we noted relatively high reliability of damaged meniscus study; at the same time some authors in doubtful case recommend to trust more 3D NLS-scanning, than CT and MRI. Initial signs of degenerative changes of arthrodial cartilage in form of superficial separation of fibers are visualized rather good, because to do so a very high resolution – down to 30 microns is required and “Metatron” system has such resolution characteristics. Evaluation of anterior cruciate ligament condition, which was quite difficult using systems of the previous generation (“Metatron”-4017, 4019), can be successfully fulfilled using systems with 3D-visualization feature.

We tried to improve diagnostic possibilities of NLS-scanning by wide application of three-dimensional modes of morphological structures visualization, such as 4D tissue, multiscanning in three mutually perpendicular planes, DeepVision, FastVision and ultramicroscanning with spectral-entropic analysis (SEA).

For proper ultramicroscanning a resolution of NLS-systems must not exceed 30 microns, for cytological studies – less than 10 microns, so the only real way to achieve this is to use algorithms of three-dimensional visualization, such as MIP (Maximum Intensity Projection, MPR (Multi-Planar Reconstruction) and DVR (Direct Volume Rendering).

Review of basic algorithms of multidimensional visualization of three-dimensional NLS-data and evaluation of their importance for knee joint pathology diagnostics are the objectives of our study.

All post-processing and analysis were carried out on a PC with Windows OS, taking into account constantly growing performance characteristics of a PCs and variety and functionality of Windows-compatible software.

In our study we used three-dimensional visualization modes (4D Tissue) that allows not only getting of virtual multidimensional pictures of anatomic and histological structures, but also mark with color the researched biologic tissue – “additional dimension” and visualize bones, soft tissues and vessels simultaneously or in any desired succession. In this case maximum possible for a generator of 4.9GHz resolution of 10 microns is reached.

We added the following three-dimensional modes to a routine scanning protocol:

– Cross-cut selection – allows to make a cross-cut of an organ model by a plane. Cross-cut can be done in three mutually perpendicular planes: frontal, saggital and horizontal.

NLS-scanning allows to restore a picture in any plane from three-dimensional array. The best results are achieved at 30-microns isotropic spatial resolution, which can be achieved only for 4D Tissue succession. We use this mode to visualize at least in two planes of anterior cruciate ligament and lateral collateral ligament of knee joint. NLS-graphy in meniscus’ plane along its flexure is irreplaceable for detection of transverse (radial) rupture of the latter. We use NLS-ultramicroscanning mode for evaluation of arthrodial cartilage condition, at the same time we can visualize small (about 0.3 mm) damages of its surface, corresponding to chondropathy of the 1st stage.

Texture mapping method has practical value among the main algorithms of image rendering with 4D Tissue method. Significance of each element in the final image is calculated by the software according to a formula known as “volume reconstruction integral” which assumes high requirements for central processing unit performance and memory bus capacity. Texture mapping method is realized on the level of PC’s graphic subsystem and provides interactive refresh rate of at least 15 fps, at the cost of image color depth reducing to 8 bits and absence of complex shadows. At 4D Tissue internal structure of an object is preserved and various methods are used to demonstrate it – cross-section of a model with a plane, segmentation of anatomic structures, etc. The following examples illustrate their informative features. 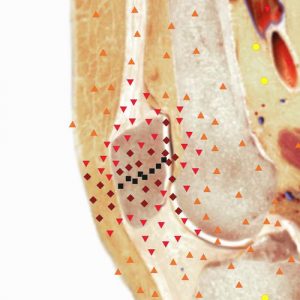 Thus data acquired with 4D Tissue at computed NLS-graphs in general meet the conditions of three-dimensional post-processing and Windows-compatible software in combination with processing power of modern PC allows to fulfill it quickly and efficiently.